You should clean the debris from the pad so that you can see leaks.

You can look under the pump with a flashlight to see if the seal is leaking.


cholmes28 said:
About 18 months ago, my pump motor went out and Hayward replaced it under warranty.
Click to expand...

What was the actual date that the motor was replaced?

Do you have a picture of the motor label?
C

The date that Hayward approved the warranty replacement was 11/19/2019. One thing I noticed when I heard the screeching noise, was that my skimmer basket was full of leaves and was actually turned on its side inside skimmer. We are starting to get a lot of leaves, and I was out of town for one day and didn't get to clean out basket. Here are some pics of the motor stickers.

Can you show a picture of this sticker? 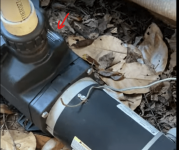 Did Hayward cover the entire cost of the replacement motor including parts and labor?

Did a new seal get installed?

What was the original install date of the pump?
C

Not sure if new seal was installed. Hayward had an authorized service company replace the motor so he probably did the new seal. They covered the parts and I think I had to pay like $150 for the installation. The original pump was purchased in 2016, and the warranty replacement of motor was in 2019 (within the 3 yr warranty). Here is the other photo. 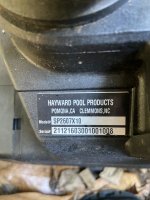 I don't think that it will be covered under warranty.

So they do not provide a warranty on an item that was replaced under warranty because the original purchase date is outside the 3 years?
J

In my opinion, the problem was caused by a seal leak.

The seal leak was probably due to a cheap seal, a defective seal, improper installation or the pump ran dry.

From Hayward’s point of view, they already covered the motor under warranty once, the three year warranty has expired and the replacement motor is usually only covered for one year from the time of replacement.

From the motor manufacturer’s point of view, the 1 year warranty has expired and the failure was probably due to a seal leak, which is not covered under warranty.

From the service person’s point of view, the standard warranty is 1 year parts and labor unless otherwise stated. Unless they are sure that the motor did not run dry, they are unlikely to be interested in doing a warranty replacement past 1 year unless they know that they did something wrong during the repair.

So, even if you could prove that the seal was defective, their warranty liability is probably limited to giving you a new seal.

Seals are considered to be consumable since they are exposed to continuous wear.

That is why is definitely pays to invest in the better seal.

From the customer’s point of view, I would expect the motor to last at least 5 years with no problems.

In my opinion, if you are sure that the pump did not run dry, then the materials and/or workmanship of the replacement were responsible for the failure and I would want the service person to cover the repair under warranty.

However, the customer has several duties that they need to do.

1) Make sure that the pump does not run dry.

2) Check for seal leaks on a regular basis and address any leak immediately.

Based on the debris on the pad, it is clear that you were not checking for leaks on any regular basis.

If you clear out the debris and look under the pump with a flashlight, you will be able to confirm if the pump is leaking or not.

Do you know for sure that the pump never ran dry?

You can file a warranty claim with Hayward, Regal Beloit/Century and the service company if you want, but if I doubt that they will be interested in covering it under warranty.

Going forward, I would consider going with a variable speed motor and the SPX2610C impeller.

When you get the new motor installed,

1) Get the warranty information in writing.

2) Make sure that the seal is the better “Ozone Salt” rated seal.

3) Make sure that seal lube is used to install the seal.

4) Make sure that the pump does not run dry.

5) Check for seal leaks on a regular basis and address any leak immediately.

This means keeping the pump area clear of debris so that you can see evidence of a leak and actually look under the pump with a flashlight at least weekly to verify that there is no leak. 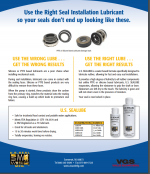 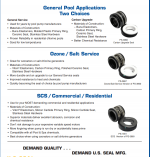 If your equipment looks poorly maintained, it becomes harder to expect warranty coverage, especially outside of the standard warranty.

The customer has a duty to maintain good conditions for the equipment.

When the pad looks like this, anyone is going to assume that proper maintenance is not being done.

Besides being covered in debris, the area looks like it is probably prone to flooding, which will damage the motor if the motor gets wet, which might be why the original motor failed.

If it is, then the warranty should have been on the installer of the pump for poor installation/workmanship/design.

You should keep the pad clean and well maintained.

I would also recommend raising the pump enough to ensure that it cannot get flooded.

When it rains, does the area get flooded? 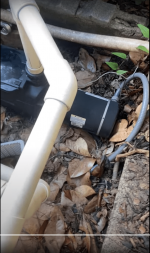 You should always ask for a detailed, written warranty statement.

In the absence of a written detailed statement, you have very little protection other than an immediate failure or an obvious defect.

Without a written statement that details what the manufacturer’s warranty is and what the installer’s warranty is, it becomes your responsibility to prove that the product is somehow defective or unfit for the purpose.

If you are not happy with the terms of the warranty, you can try to negotiate better terms or choose a different product or a different service person.

Once you get past 30 days, if you do not have a written warranty statement, your chances of getting something covered under warranty are reduced significantly unless you can find a written policy or you can prove that the product was clearly defective or installed incorrectly.
J

In the absence of an "Express" warranty, you only have an "Implied" warranty, which only guarantees that the product will work as claimed and it is suitable for the purpose.

Since an "Implied" warranty does not include a specific amount of time that a product is guaranteed to last or work correctly, it becomes a subjective matter of opinion if the product has lasted or functioned long enough to be reasonable.

The seller can also claim misuse or abuse to void a warranty if they decide that the product was used in a way outside normal conditions or exposed to excessive conditions such as exposure to water for the bearings or running dry for the seal.

If the seller claims misuse or abuse, it becomes a debate that is not easily settled or proved. 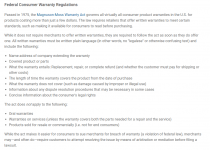 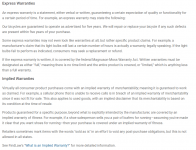 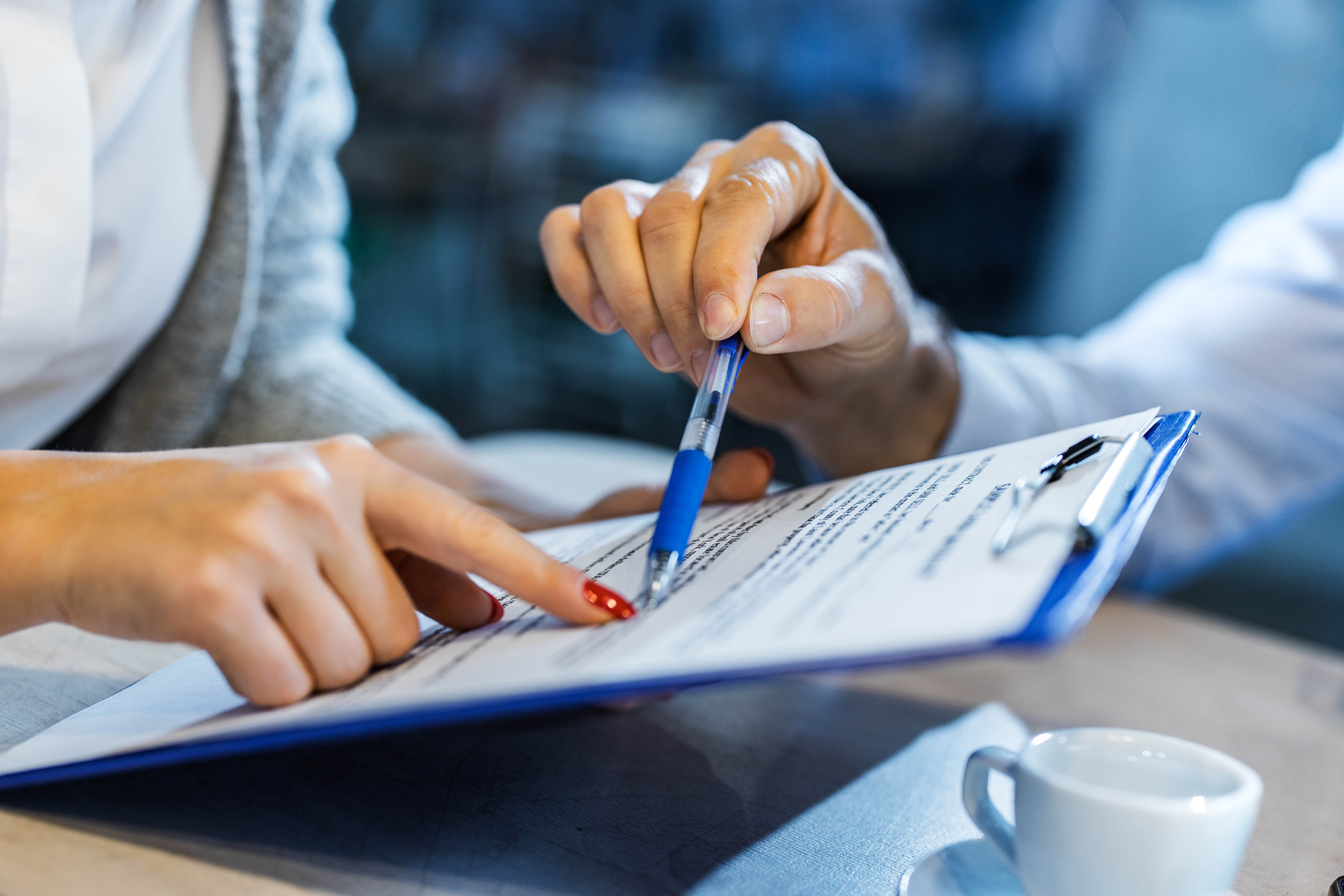 A consumer warranty is best described as a guarantee made by the seller of a given product assuring a certain level of quality and reliability. 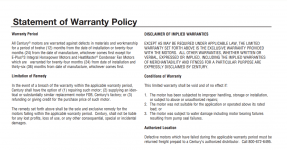 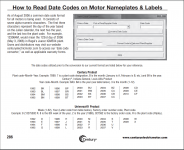 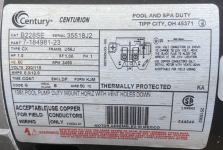 The motor was made on the 355th day of 2018, so it is past the 2 year manufacturing date and the 1 year installation date.

Failure due to water damage, including seal failure, is specifically excluded.
C

Thanks for all the info. I am pretty certain that it is the bearings. I have been in this house for 10 years, and in that time, I have replaced the motor in 2013, then the entire pump including the motor (2016), and then motor itself 3 yrs later in 2019, and now about 2 years later, the motor is shot again. I have neighbors who have pumps 15 years old and still running fine! I run my pump 12 hours a day, except in the winter when I run it 24, because the freeze protection on my timer is not working, but I really don't understand why I only get a couple years out of the motor. From what I have read, the motors are designed to be exposed to water, but they don't like chlorinated water, so as long as I don't have a leak in the pump housing or a nearby fitting, the only water that would be sucked in would be rain water. I cleaned the leaves off the pad, and while the pad is dry, there is some moisture around the underside of the pump housing. That being said, now that I need to buy another motor, do I just need to buy another 1HP motor just like the one I have now? What else do I need top replace while I am doing this?
Last edited: Aug 21, 2021
M

Whatever you replace it with I would recommend checking voltage drop once the new motor is up & running.
You must log in or register to reply here.
Thread Status
Hello , This is an inactive thread. Any new postings here are unlikely to be seen or responded to by other members. You will get much more visibility by Starting A New Thread