I have an older 21,200 gal VL IG pool. Has a hopper deep end with an exit ladder, cut out steps in the shallow end, and one skimmer and one return. Had a main drain in the deep end but it went bad a few years back so I plugged it.

With just the one return I am not getting great circulation, and was wondering if a kreepy krawley type vacuum would help, since it will pull water from all around the pool. I see a knock off on Amazon with good reviews for $87 shipped which definitely has my attention.

Anyone with experience with these type of suction cleaners, do they work reliably? Do they get stuck a lot? Do a good job cleaning? 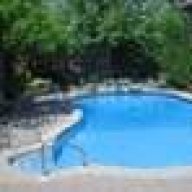 My experience with suction cleaners is that they just don't clean the entire pool leaving whole sections uncovered no matter how many adjustments you make. And yes, they get stuck, usually on the main drain. Meanwhile, the skimmer doesn't work when they are operating so floating debris builds up around the edges. In your case though a Kreepy or Cuda could quite possibly improve circulation. For $87, you haven't a lot to lose.
R

Thanks. I was hoping more people here used or had used them.
C

My parents used a Kreepy Krauley in their pool when I was growing up (but it was kind of the only option back then...). Once I moved out, they ditched the Kreepy for a Barracuda. When I bought my house, I "inherited" their Kreepy and Barracuda when they switched to a TigerShark.

I have used both the Kreepy and the Barracuda, and have reached the same conclusion: Neither of them cleans 100% of the pool, and neither copes well with a deep end. Maybe I missed something, but I could never get either the Kreepy or the 'Cuda to maintain good contact with my pool surface.

Having said all that, a suction side cleaner like the Kreepy or 'Cuda would help with your circulation issues. Just don't expect to never have to brush or manually vacuum your pool...
O

I've used both the Barrracuda and Kreepy for years in lots of pools. They're really similar. They will clean your pool but never all of it, and can get stuck. But they help keep your pool cleaner.
You must log in or register to reply here.
Share:
Facebook Reddit Pinterest Tumblr WhatsApp Email Link

Will a robot really solve my suction cleaner problem?