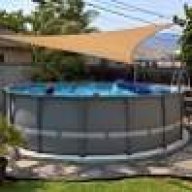 Like other members here, I've had an issue with a black dust that simply refuses to be captured with my sand filter. In my case it has been a few seasons where the pool looks great after vacuuming but in a couple days, all the fines have worked there way back through the filter and re-settled on the bottom. I've tried adding a bit of D.E. to my filter and have also vacuumed to waste (both of which help a little though never clear it up entirely) but the extra backwashing and water waste are things I'd like to avoid.

In my investigating for other solutions I discovered a product named a SlimeBag and also a thread here where users found a source of filtration bags at a much reduced cost that can be used to accomplish the same thing. (SlimeBag for 1/10 of the price, yes you can!)

I was planning on following the same advice found in that post but as I was digging around on the McMaster-Carr webstore I found some interesting products that gave me an idea on how to make a more rugged and professional looking solution. The end result is this:

Here are the parts required:

The only "labor intensive" part of this build was sanding down the face of the retaining ring of the Hayward return. You basically want to sand the dome down until it is completely flat being sure to leave a thin lip (about 3/8" wide) of material remining on the inside of the ring. Basically you want to sand down to just before where the grip ridges begin. This results in a flat surface that matches the dimensions of the 1 1/2" PVC 45 degree elbow. I also sanded the end of the elbow to be perfectly flat and then used PVC cement to glue the two together. Because this is not a traditional "pipe inside fitting" union, I also put a bead of epoxy inside the fitting around the remaining lip of the Hayward retaining ring. You'll want to apply the epoxy bead before cementing any of the rest of the parts together or it will be hard to reach. The combination of these two bonds results in solid joint.

Next is just gluing the rest of the PVC parts together to end up with this:

With the fabrication done, all that remains is to screw the Hayward ring back onto the inlet and screw on the bag. Et voila

I suggest attaching the polishing bag immediately before vacuuming but also leaving it on for several hours to a day after to allow any fines that work their way through the sand filter to be captured by the bag.

It is amazing to finally have a pool bottom that remains clean for days after vacuuming and the water itself seems to have an even greater sparkle and shine.

The overall cost was just under $50 but when it comes time to replace the felt bag they are only about $10/ea. They can be washed and reused though I've not used it long enough to know how long they'll hold up to cleaning as well as exposure to pool chlorine, etc. I also noticed there are higher quality "fabric" bags available through McMaster Carr but they are at least double the cost... I may try one of those at some point.

Great job! Thanks for the write up and sharing!

Looks good! You could have just glued a short nipple & a male adapter into the elbow & screwed it directly into your hayward jet after removing the eyeball

I don't quite follow your suggestion... The thread on the Hayward jet didn't match any of the sizes of any PVC threads at the hardware store. IIRC it seemed to be about a 1 3/4" thread.

I believe i used an 1 1/2” male adapter for my pressure side vac - it screws in quite well - no issues going on the 2nd season.

Yup i used an 1 1/2” adapter- that is roughly is the inside diameter of the pipe- fitting. Just checked for ya . Now at least of u need to make another u don’t have to hunt down a hayward fitting

I didn't remember that the eyeball assemble unscrews from the inside of the return. If that's the case, then yeah that would be cheaper and take the 15 minutes of sanding out of the equation

Thanks for that!
Reactions: Mdragger88
You must log in or register to reply here.
Thread Status
Hello , There was no answer in this thread for more than 60 days.
It can take a long time to get an up-to-date response or contact with relevant users.

S
Is my pump okay for my filter?

Above Ground Pools May 24, 2021
AGP noob
A
R
Switching from a cartridge to sand filter