21K pool, had CYA at 30 for a few weeks as I was SLAMing. Once finished, I added 5 lbs of dry stabilizer which said on the package that it was 99% or so CYA. Added it in a sock by a return jet and massaged the sock so it would dissolve quickly. Tested a couple days later expecting 60ppm but it was only 40! I don't think I have a leak but do have auto-fill but no auto-drain. I also have a solar blanket I keep on when not swimming, except an evening or two a week when I want the water to cool down. Water temp is between 85-92 F. Shouldn't 5 lbs in 21K gal have raised CYA more than 10ppm? 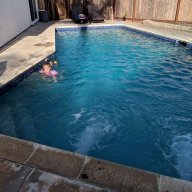 Keeping my solar blanket on for extended periods of time seems to consume my CYA. I've kept my solar blanket on the pool for the last two winters, and each time my CYA has gone from 70 to 0. I have no idea what causes this, but I know that I don't have a leak since I'm not having to add any water beyond what the occasional rain storm provides.
Reactions: Pegasus_RPG

CYA does degrade over time. Perhaps the use of the blanket 24/7 is causing it to degrade faster in the heat? Or your CYA Awas lower than you thought before you added that 5#? The CYA test is difficult to read less than 20-30 depending on which vial you use to measure it.

I buy the 50lb container of 3" pucks and use them to raise my CYA, plus I get a break from adding bleach...in 5 yrs, never bought any CYA and i keep mine around 40-50ppm