Burning eyes of all of a sudden 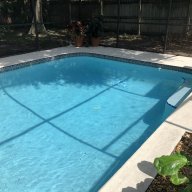 Last night, my wife told me that her eyes burned when she swam in the pool. She also had a cut on her leg that burned. I've been pretty busy at work and haven't been able to jump in and experience it for myself. This is the first time I've had a report of discomfort in the pool and wanted to share my data and get your collective take on it.

We bought the house in October and I've been managing it with TFP methods since early this year. I realized early on that I was dealing with a high CYA pool, but made sure that I maintained the proper FC levels. Given the torrential rains in my area, I was willing to manage the CYA until it lowered due to dilution (which it did!). I also purchased a nice pH digital tester so that I could test at the high FC levels I had to maintain. I know it may come up and just want to preemptively say that I calibrate the tester weekly with a control sample and feel very confident in the results of my pH testing. It was smooth sailing until 8/30...

On 8/30, I noticed a green patch on the floor of my pool for the first time ever. I brushed it and got the classic "green poof" that I read about on the forums. I had never let my FC get to minimum or even close for that matter. The problem (I think) was that I got lazy with brushing and vacuuming. I ended up doing a SLAM that took about 3 days to pass the tests. Ever since then (and you'll notice this in my logs) I've been raising the FC to 1-2 ppm above my target range daily as extra insurance.

Being super paranoid about the unexpected algae, I ordered a TF-100, thinking that maybe my testing was bad. I was previously using a Taylor K2006C kit.

On 9/7, I ran the full battery of tests with the new TF-100 and everything checked out with the exception of the CH test. My Taylor 2006C had been reporting a very consistent CH reading that dropped slowly over time with rain dilution. I went from a CH of 460 in May, to a CH of 400 in September. However, the TF-100 kit gave me a result of 500 ppm. I rolled with the TF-100 result.

On 9/14, I ran another full battery of tests and the TF-100 now reported my CH as 575. I did the test with my K2006C and it reported 440. So both tests (even though they didn't agree on the exact number) indicated an increase in CH even though my only water additions to the pool have been from natural rain water. I do want to mention that I have recently seen a lot of calcium nodules on the pool floor. Previously I noticed 2 or 3 here and there. In the last month I've seen at least 10 of them. The pool was last refinished about 10 years ago according to the previous owners.

Anyway, I trusted the 575 number and realized that my CSI was getting close to .3 with that new number. I had previously only used dry acid due to having a supply on hand, but went to Home Depot and bought the HDX Muriatic Acid. I added enough on 9/14 to lower the pH from 7.6 to 7.3. My goal was to lower my slightly high TA while getting back down to a good CSI level.

Last detail, I promise! The MA lowered my pH as expected. However, for the past two days since I added it, my CC reading is 1.0. It's always been 0.5 or 0. No unusual smells or anything. I've read here that CCs are more likely to cause irritation than anything, so wanted to convey how unusual a CC reading of >.5 is for my pool. To have it at 1.0 two days in a row is crazy to me.

Test results from yesterday when the water was uncomfortable:

I appreciate you reading this far. Thank you!
W

I don't know about the CH issue but the pool needs a SLAM. With a cya of 70 you're going to need A high FC to slam. You don't have a SWGC why does it have to be as high as 70

wireform said:
I don't know about the CH issue but the pool needs a SLAM. With a cya of 70 you're going to need A high FC to slam. You don't have a SWGC why does it have to be as high as 70
Click to expand...

I am not maintaining it at 70 on purpose. When I bought the house the CYA was at 180 and I’ve been lowering it over time with rain dilution. It’s an older house and the layout of the property isn’t great for draining the pool. It’s come down quite a bit (180 down to 70) and I’ve never let it get close to the FC minimum.

I appreciate your feedback on needing to SLAM. I’ll give it a shot.
B

PH is not accurate when FC is above 10. Burning sensation could be from low PH. I looked through your pool math logs and you keep your FC extremely high I'm assuming because of the elevated cya level. Have you done a ph test at lower FC levels to check that it is accurate? Just thinking you may have dropped it lower than what you thought.

batesjer said:
PH is not accurate when FC is above 10. Burning sensation could be from low PH. I looked through your pool math logs and you keep your FC extremely high I'm assuming because of the elevated cya level. Have you done a ph test at lower FC levels to check that it is accurate? Just thinking you may have dropped it lower than what you thought.
Click to expand...

So, I’ve certainly experienced the inaccuracies of the pH drop test when FC is high. It’s what spurred me to buy an electronic tester, which I understood wouldn’t suffer the same chlorine interference as the drop test. As an example, I tested earlier today with both and my electronic tester read 7.4 while the phenol red test read 7.8. I have been going off of the electronic test due to the high chlorine.

I’m glad you brought it up. Definitely food for thought. Maybe I’m pushing the pH way too low.
W

The way to go about this, Finish the slam with two nights of the OLCT just to be sure all is where you think you are at. Let the FC drift down where it should be in line with the CYA of 70. Once you reach that point work on getting the PH to the mid 7 range. With a TA of 90 it level off without that much movement day to day.

R
Irritated eyes with FC at 7.5, all other params normal

C
sudden pH jump followed by way too much acid

Aug 24, 2020
mguzzy
M
R
looks clear looking into the water but cloudy when I open my eyes under water??? What is going on?

Can't keep chlorine levels up - need another set of eyes!