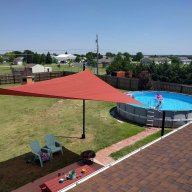 I'm calling this my 1st slam because I've only had to bump the clorine twice in the 4+ years of tfp style of pool care, didn't really need to hold the fc to fix the problem.

I think my problem started last year of floor algae taking ahold in the creases and wrinkles of the liner and inside my main drains as I pretty much had them off. I did bump the fc up a few times to try to knock it down, which didn't help, and even put diclor directly on on it, which did help, but low time and money just meant I just used more clorine as I was getting a new pool next year anyway. At the end of the season I took my old Intex that had been up for 3 years down and put it away just in case.

So next year came, and we'll now oil crashed due to a 30 million barrel shorter demand (Kansas common oil traded at -$48 one day!), so not going to buy a new pool. Ouch, now i get out my old pool, found a crappy liner and patch the holes for the main drain and reinstalled the pool, that was no fun.

Put up the pool, installed a deck, reinstall equipment in a better spot with actual correct wiring, skimmer now faces south. Still have floor algae. Haven't installed my stenner yet and add in a few days of I forgot and it's worse, I still have perfectly clear water, so clear that I can really see the floor algae. Pool has been open since before the start of the swim season here.

I fixed my robot with Teflon tape, bought some bleach, got my test kit refill, and am determined to kill it dead.

The plan is the simple slam, test and brush as much as I can, run the robot as much as I can, if it persists, I might get some trickor pucks, and set them right on the floor tomorrow, yes not what anyone should do but at my level of floor algae it won't touch the liner.

Off to gather in groups greater than 10, I'll check again tonight and hopefully brush it, I think I'm going to turn off the pump tonight and vaccum in the morning.

Wait till the morning, I certainly hope for better but we will see

I think I'm going to turn off the pump tonight and vaccum in the morning.
Click to expand...

That is certainly your option but you are not SLAMming the pool. The SLAM article requires pump run 24/7 and the FC should be re-dosed before dark tonight unless you have already done so.

Before, look at water clarity!

Run your robot and get that debris off the floor. What you miss with the robot, brush up into the chlorinated water.

What is your psi?

I think I may have broken the algae production as the fc was dropping faster before, only took 2.5 gallons of 10%. I'm going to do what I hate and vaccum, I'll post a pic after I get sick of it.

Manually vacuuming is the most effective way to get that debris off your floor and you have a TON of it. You will likely overwhelm your filter very quickly so watch psi carefully and backwash as necessary.

Over by the robot the floor was clear of debris, you can kinda see a line in the last picture where there is debris and not. Took 3 backwashes and I got most of it with the vaccum.

Pic uploader didn't work yesterday and I was buzy.

I'm headed out out of town Tuesday and I'm working today so this job is on pause unfortunately. I did get my stenner setup and working and set it to around 1 gallon a day so I can continue Friday.
You must log in or register to reply here.
Share:
Facebook Reddit Pinterest Tumblr WhatsApp Email Link