Use SWG during SLAM?

Theory: Running the SWG during a SLAM could make the SLAM end sooner and reduce the amount of bleach needed.

Caveat: Can't have it running during a OCLT.

So I had to do a SLAM last weekend. Since I understood how much FC my SWG was producing, I keep it running all during the SLAM, 24 hrs a day. I still tested the same and still needed to supplement with bleach but it would not have been as much. I finished the SLAM in about 3 days.

If the only real issue with this for most is that for someone that is just trying to understand the concept of a SLAM, their SWG, FC, CYA, etc, I fully understand.

I just wanted to know if there was some other reason it is not recommended.

In the early phases of a SLAM it will make absolutely no difference. The FC loss rate due to algae is typically measured in ppm's/hour and even the largest cell (2lbs/day) can only produce ~1ppm per hour per 10,000 gallons. It may add a little moderating effect later on in a SLAM when you're in the slow clearing phase. But even then, it won't help a whole lot.

What it will do is put a lot of strain on the cell and possibly add more scale to it because you'd be running it 24/7 at 100% output. That's not good for the lifetime of a cell.

You're better leaving it off and just sticking with bleach during a SLAM. Even if your FC droops a little bit, it's not the problem. The slow clearing phase has much more to do with your filter performance than it does with FC levels. 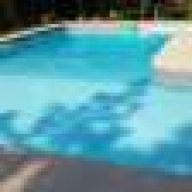 You hit the nail on the head. We say not to so new folks can grasp and understand through testing what their chlorine consumption is. It's extra wear on the SWG too if you're slamming just because the difference the SWG makes in chlorine is kind of minute compared to what is usually required. But the key is understand what you are doing and why.

On a side note, I did use my SWG while slamming last year and I went up to mustard algae chlorine level and my SWG registered high salt and stopped producing. Salt was not high. It stopped registering when my chlorine dropped.
You must log in or register to reply here.
Thread Status
Hello , This is an inactive thread. Any new postings here are unlikely to be seen or responded to by other members. You will get much more visibility by Starting A New Thread

Turning the SWG off during SLAM

F
Testing during a SLAM