My wife and I have gotten an estimate to add passive solar heating to our pool (15x36 in-ground, avg 48" deep) in Sacramento, CA.

Our hope is not to swim year-round, but to add a few months to the time it's usable. Our pool is situated next to a pavilion that blocks direct sun until around 11AM, but otherwise has full sun until an hour before sunset. Last year, our first in the property we acquired, we had maybe 25-30 days where the temps reached my wife's comfort zone of about 84F. I was good down to about 78F. So, we are seriously considering a (commercial) installation of passive heating by a contractor with great reviews.

However, my wife was talking to a friend who lives close enough to see the same conditions and he was pretty skeptical, referring to a system he already had; essentially that it would lose almost all of the gained heat overnight. I do understand it's not a perfect solution, but now we're feeling pretty defeated about the whole process.

So, can I ask if you have experience with such a system? I believe the panel dimensions are to come out to about 300sqft, and will see sun pretty much all day, tilting maybe 20 degrees to the south. There's about 50-60 feet of piping that will go underground between the panel mounting location and the pump. I assume we can help that with insulation, too. (I'm actually out of town at the moment, so I don't have all the details in front of me.)

Most of the "information" I find in searching online seems to come back to companies selling and/or installing systems, so I can't feel comfortable with what they say.

What I'm wondering is -- can we realistically expect to see 83+ degree temps for ~4 months during the hottest part of the year in Sacramento? We don't want to spend ($7300) to not get decent results.

You're better off with a heat pump. A bubble cover will help heat loss at night but without one anything solar gives you during the day will be lost at night.

Forgive my ignorance, but what is "passive" solar heating? I googled it and didn't find a clear answer. I have solar here in the Bay Area and it helps, but "passive" doesn't mean anything to me.
S

Rocket J Squirrel said:
Forgive my ignorance, but what is "passive" solar heating? I googled it and didn't find a clear answer. I have solar here in the Bay Area and it helps, but "passive" doesn't mean anything to me.
Click to expand...

Water is pumped into solar collectors on the roof, and back into the pool. A collector supposedly adds about 3-5 degrees of warmth to the water as it passes through.

sbixby said:
Water is pumped into solar collectors on the roof, and back into the pool. A collector supposedly adds about 3-5 degrees of warmth to the water as it passes through.
Click to expand...

Oh, OK, that's what we have. I just don't understand why it's called "passive". It seems "active" if the pump is pumping water through the collectors. Can you clarify? It's just the terminology which is confusing me.

Anyway, our solar helps a little at the beginning and end of the season. We don't need it during the main summer season. Our water stays warm because we have an auto-cover which retains the heat. There have even been rare times we enabled night-time cooling.

I believe our solar is undersized for our large 40 kgal pool. We were constrained by the size of the nearby pergola; the roof was already occupied by photovoltaic panels. With only 15 kgal, you have a good shot at getting heat to the pool in Sacto. But as mentioned, you'll need to cover the pool at night. As far as the calculations for square footage, I'm afraid I can't help. I just installed as many collectors as I could fit and hoped for the best. It's better than nothing. ?‍

My in-laws have a passive solar heated pool in Elk Grove. They have full sun exposure pretty much all day long. Supply pipes (2-1/2" sch 40 PVC ~40 ft out and 40' back) are above ground and un-insulated. The solar heating is so strong that they have to turn it off in the hottest two months (July, August) or the pool temp exceeds 90 degrees! Obviously when it's that hot outside, you don't want to jump into a hot water bath to cool off!

Rocket J Squirrel said:
Oh, OK, that's what we have. I just don't understand why it's called "passive". It seems "active" if the pump is pumping water through the collectors. Can you clarify? It's just the terminology which is confusing me.
Click to expand...

I think it's because it uses no extra energy (other than pumping). Eg, natural gas or electricity (heat pump or water heating).
P

Doesn't matter how the heat gets into the pool (gas, solar, electric), it will cool down overnight. We heat ours up to 86 during the day and by next morning it's back down at least 6-8 degrees, more if it's cold. It depends on how cold your nights are but we have a heat pump and it will raise the temp a few degrees an hour. Solar will be less BTU than a heat pump. The company should be able to calculate and tell you how much it will raise the temp but that will always be at the end of a sunny day - in the am and early afternoon it's still going to be cold and it will reset every day.
S

We do have a (manual) bubble cover. It can stay on most of the day. We usually swim in the afternoons anyway when it's stupid hot out, as Sacramento tends to be all summer.

So I don't mind covering it up each day and uncovering to swim. Based on other people's responses, I expect that we'll divert past the panels some part of the year anyway. Which actually begs a question, if the panels are not being used, but still full of water, does that create problems of it's own in the heat of summer?

sbixby said:
if the panels are not being used, but still full of water, does that create problems of it's own in the heat of summer?
Click to expand...

No. The collectors should have at least one vacuum relief valve. This automatically allows air into the collectors when there is no pressure from the pump. Next time solar engages, the VR valve will close and you will normally see some air bubbles from the pool returns. 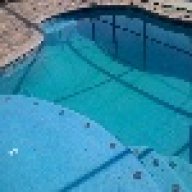 sbixby said:
if the panels are not being used, but still full of water, does that create problems of it's own in the heat of summer?
Click to expand...

usually only the side going to your panels gets diverted. the side from your panels back to the pool stays open allowing any expansion of hot water to just fall down the pipe to your pool. yes that means some water travels up that pipe but not much. least resistance and all.
S

It turns out, a neighbor has a pool maintenance business and we worked with him to figure out how best to extend our swim season.

The story? We worked with a couple of local solar-collector installers to find an answer -- two of them seemingly just wanted to sell us something with a heavy-handed sales pitch; the first was too strange and their plan was over the top weird - like running pipe to the house 150 feet away for collectors on the house. Bye. The second one had a reasonable looking proposal, but googling around I began to have doubts. I queried the company about how the system would be laid out, what to expect, etc, etc -- got some very vague answers, paraphrasing along the lines of "It varies. It will extend your season." That left us feeling like we were not getting the essential story. Bye, #2.

Then we talked to our neighbor; he suggested the heat pump and referred us to his favorite solar company, who came out. This guy was great, he laid out a good plan and costs and expectations and suggested that maybe solar wasn't the ideal answer given the structures where the collectors would go. In the end, we decided we didn't like the idea of all the collectors everywhere -- it would mess up the aesthetics of our lovely backyard for a questionable overall result.

In the end, we decided the neighbor's heat pump proposal was best overall with the awareness that we'd have some additional costs. As part of the install we also got a variable-speed pump in place which should cut down on pumping costs and give a better overall filtering by running longer and quieter. And he had it up and running the weekend after we talked to him. Gotta love the neighbor!

So far, it's only run a few hours and gets the pool in the range enough that sun heat and a bubble blanket are plenty to keep the temp in the right place for our swimming pleasure. I expect we'll run it more as it cools off in the fall before calling it a season. I'm sure I'll run it a little bit here and there in the off season to keep the dust off, so to speak but I don't expect we'll swim much past October. Without it, though, Oct 1 rolls around and it's just not warm enough to enjoy anymore without the added warmth from the heating solution.

On to the next thing -- maybe resurfacing this fall, depending on (neighbor's favorite contractor)'s recommendations and estimates. Not a huge hurry, but it does look a little worn and funky.