About to start plumbing on my 20x44 rectangle. 2 skimmers, 6 returns plus plumbing for a slide. I'm now planning to go with 3" pipe for the suction, 2" for the returns. I'm including an image of my layout showing where the skimmers are. Pad will be near the corner by the step. I will have an autocover, but when it's off, the skimmers will line up well for either the usual prevailing winds in my area to one corner, or for breeze that sometimes comes off of a nearby lake to the other.

1. Return placement - Should I space 3 returns evenly on each long wall (so at the blue letters, in the image), which means that a return will be located opposite each skimmer, but also one near each skimmer? Or slide them down the wall, so to speak, evenly spaced between the skimmer and other end wall (at the red numbers, in the image)? Either way I'd aim them for clockwise rotation, but it seems like I might be more likely to get dead spots in my "circular flow" if I did the "red numbers" option... Or is there something else I should be considering?

2. At 9' deep and no main drains, I was advised to have the returns in the deep end roughly opposite each other and aimed down to create a vortex of sorts at the bottom of the pool for circulation. Yes? Then all the more reason to go with the even spacing and returns near the skimmers (blue letters)...

3. Plumbing - I'm thinking two main 2" lines, each split again with a 3-way valve for four outgoing lines - slide plus three 2x returns. Is it worth the extra pipe to keep the average length of each 2x return run roughly the same? That is, put the shortest run and the longest run on the same line? Or maybe put the two longest returns on the same line, but split that valve with the slide, since the slide will not usually be running so those two long returns wouldn't usually be "sharing" water and thus could get that full "main line" most of the time. Or is that not how it works anyway?

Thanks in advance for any help anyone is willing to offer! 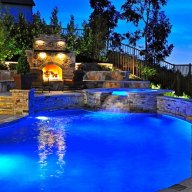 I'm going thru the same process as you and trying to figure out the most optimal placement of pool return lines. I've come across advice and threads that talk about looped returns, but my plumber advises against it since you're trying to create a circular flow pattern, the equal flow at certain spots farther away won't have a positive effect. My understanding is that they're are eyelets in the return nozzles so you have some flexibility in adjusting it at least 120 degrees.
You must log in or register to reply here.
Share:
Facebook Reddit Pinterest Tumblr WhatsApp Email Link

D
Placement and Qty of Returns/Skimmers/Lights