Anyone have experience with Clearwater/Zodiac/Jandy LM Series SWG?

I am hoping there is some knowledge about this older SWG marketed under the Clearwater/Zodiak/Jandy LM2-40/24/16 labels. It is probably 10-14 years old.

I bought this item: Zodiac Clearwater LM2-40 Power Center on craigslist a few days ago, it did NOT include a salt cell. The owner said it worked up until his last salt cell failed, at which time he bought a latest generation salt generator/cell. I trust him, and after taking it apart and looking inside, everything looks good.

But I still want to test it before spending ~$400 for an OEM salt cell shipped from Australia, haha. There is at least one barrier to doing the testing, and that is that the salt cell has a built- flow detector (seems to only rely on electrical characteristics in the cell) that will disable the voltage out of the Power Center to the salt cell (and my testing of it) if I can’t figure out what is necessary to “trigger” this sensor.

The “sensor” outputs a single electrical probe from the cell, so I suspect that there is some voltage generation/sensing between the salt cell +/- electrical feeds AND this probe. For some reason, I don’t think its mechanical but without having a cell to look at, it is tough to tell for sure.

Does anyone have experience with this older SWG? And/or possibly have an idea about how to generate a “pretend flow” in order to test the voltages to the cell. I also want to investigate a bit about its current reversing capability because the way it is described (almost like a “cleaning”), it seems like it might NOT be what is done on more recent SWGs where current is reversed every X amount of time.

Well…I thought it was a long shot that any of the regulars on this board might have some experience with this older SWG, but I will keep talking to myself for a bit and see if it triggers some memories, haha. So I have done a few experiments with this device.

There are 3 wires that attach to the salt cell (which I currently do not have). It turns out (obviously) that the RED/BLACK wires are the ones that carry the current/voltage to the salt cell to induce the chlorine generation. The BLUE (the jumper is white in my picture) wire is the “flow sensor” which turns out to be a sensor that simply detects current?/voltage? whenever there is water between BLUE wire and either the RED/BLACK wire. That is the “check flow” mechanism…that water exists in the cell.. The cell must be installed in an upright position (like in the picture below) so that IF there is actually no water flow, the chlorine/gas bubbles that collect in the cell will eventually cause this BLUE wire to have NO water connectivity to either the BLACK/RED wires and this shuts off the cell. Pretty simple, but a bit scary.


So I powered up the device and took those 3 probes and inserted them in a cup of water to test it out. I did add some salt to the water but I it didn’t make any difference for these experiments. As I mentioned earlier, the BLUE (white in my case) wire must contacted with the water in order to allow current/voltage to be supplied through the RED/BLACK wires. Insertion of the BLUE wire causes the “No Flow” indicator on the panel to go off, and RED/BLACK wires "power up".

Here’s a picture…this was taken after a few hours of run time and definitely shows why copper is not the metal that they make these plates out of, haha…what is all that crud? Not sure if you can see, but the RED wire is where the bubbles are forming. 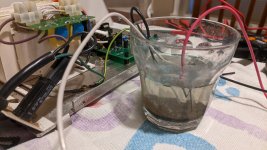 Here are a few things I learned. 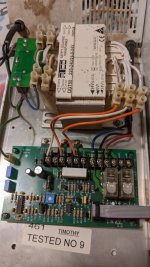 A big question for me is HOW the RED/BLACK wires are supplied with voltage when the BLUE wire detects “flow” (just water in this case). That power is definitely NOT switched on by the RELAYs, which do not change when I manually place the BLUE wire IN and OUT of the water. Could there be some discrete devices that act as relays?…I am just surprised that it would be done for these wires as I suspect they will be carrying several amps when a real salt cell is placed in the system. Could it be that the voltage regulators (see near the top of the board, below the transformer), are simply regulated to a low voltage in the case there is no flow?

Anyway, I will look at a few more things, and I might be able to cobble together an actual salt cell with the help of @MyAZPool. The problem is that these units are pretty old, and only really supported out of Australia, haha.
Last edited: May 14, 2022
You must log in or register to reply here.