Hey all of you with beaded liner pools![1]

The question of reattaching the liner back into the track comes up on a regular basis so I figure it might be nice to have one place for the tips and tricks of getting a ˜popped out" liner back in track.

First and foremost make sure that the track is clear of dirt/ debris (ants like to make their colonies in the track) usually splashing some water into it will clear the dirt, but sometimes you have to clear it with a screwdriver.

A. Try to pull the liner up enough to put it back into the track, on a warm day with direct sun, it will usually go back in. Note - The bead has to slide in perpendicular and at a slight downward angle (ok, that defies the perpendicular, but I hope you know what I mean) to the track.

B. Not enough stretch to the liner, or a cold and cloudy day? My first trick to adding some stretch to a liner is to rapidly rub the area with a cloth to generate a little friction and try to pull it up again. If that's not enough, or the area is too big to make it practical, hot water from the tap should be enough to give you the stretch you need. Pour it on the entire area both on the poolside and behind the liner. I DO NOT recommend boiling water as it will soften the vinyl too much and you could end up poking a finger through it while pulling up!

C. It is possible to use a hairdryer or heat gun to warm the liner enough to stretch it back in, but *BE CAREFUL!!!!!* not to burn a hole in the liner or warm it too much!!!! Use your other hand to feel the temp of the liner and *DON'T!! put it directly on the liner or too close to it!! DO warm the entire liner from bead to waterline and past either end of the part that's out of the track. (note - sometimes you have to lower the water a little (you don't want to warp the tile pattern)

D. SUPER SECRET TECHNIQUE - If you fold the bead over to be ~perpendicular (as above) to the wall just below the track, you can nudge the liner back into the track. (Here is where it gets hard to describe) With the bead folded so that the nose of it is perpendicular to the wall, use the flat part of your index fingers...

(detail - put your hands out in front of you, palms facing away thumbs perpendicular to fingers [like you were going to brace yourself on a wall], curl your fingers [but only the fingers don't make a fist] so that the middle bone of your fingers creates that flat area) put your thumbs (thumbs are still extended)

... on the coping, turn your elbows out and reach down so that the flat of your index fingers is just under the seam that connects the bead to the liner. Gently kneed the bead up the wall the bead will inch it's way up and into the track (angstrom is probably more accurate than inch).

It doesn't go quickly, but you will be able to see the 2 ends of the pop going back into the track, and all of a sudden the liner is back in. (I know that I didn't explain this very well. If someone figures out what I'm trying to say and can put it more eloquently, please edit it) A lot of times I can use this trick without resorting to heating the liner, but sometimes still have to relax the liner first. 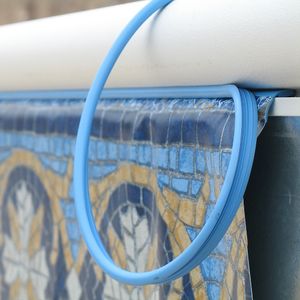 Liner lock, the barbed bull nosed plastic strips, can be used where you have an area that keeps popping out to secure it. It can also be used when you have a large ˜pop to keep what you have put back in, in the bead while addressing the rest. Sumo and Cleancloths also had some good alternative things to use.