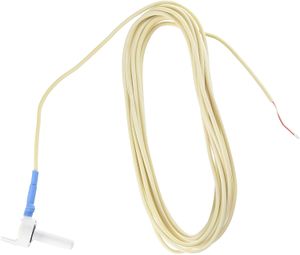 The temperature sensor is typically mounted in a hole drilled into the PVC pipe and then secured with a band clamp around the pipe and sensor.

Temperature sensors in other pool equipment also use 10K thermistors, including:

The sensor can be tested with a multimeter. It should read 10,000 ohms at 77F (25C) degrees. You can lookup other test values in the Temperature vs Resistance Conversion Chart for 10k Thermistors.

To test the device a 10K ohn resistor can be plugged in in-place of the thermistor cable and the device should read it as 77F (25C) degrees. 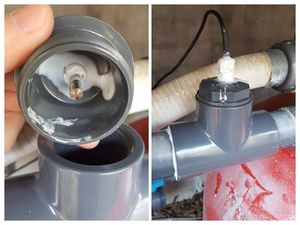 These type of temperature probes are best secured using a PVC T union. The two ends of the T will match your pipe size (ex., 2” glue joint) and the center of the T will be a smaller diameter threaded pipe connection, ex., 3/4 female pipe thread.[5]

Next, get a 3/4” male threaded plug and drill a hole into the top of it. Put the thermistor in the hole and pot it with a thick blob of epoxy. Thermistors are cheap as are PVC pipe plugs so just make a bunch of them.

Screw the plug into the T with some pipe tape or liquid Teflon tape (or both) and you’ve got yourself a solid connection that is easily replaceable in the event the temp sensor dies.

The temp sensors (PSC2023 and PSC2022) on the Hayward Pool Boss system are not 10K thermistors.[6] They are Negative Temperature Coefficient (NTC) thermistor where the resistance goes up when the temperature goes down. The span of readings at normal pool temperatures is more than 200K Ohms.[7]

Hayward said the unit was made by Balboa. The Balboa M7 unit looks almost exactly like a direct replacement for the PSC2022 Hayward part except that the wire is 2 feet long instead of 20 feet long.[8]