We're finally nearing the home stretch on our pool build. This is our second pool build as we unfortunately had to move just 2 years after our last build.

Were just waiting on plaster and fill (which is happening this week) and we'll be done! We've had a few issues which has me questioning the current plumbing setup. We are getting a gunite pool with a raised spa and grotto waterfall. When we designed the pool with the builder the grotto was supposed to split and spill into the spa as well. The contractor and designer did not communicate well and I noticed when the stonemason left we just had a grotto waterfall that was separated from the spa. I asked the pool builder what was going on and they explained the mistake. Luckily I caught it before the deck (pavers) was laid and they plumbed another line and built another smaller waterfall that spilled into the spa. It's not exactly how we envisioned it, but too kuch work to fix and I didn't feel like waiting/wrangling with them to fix it exactly the way we agreed and I'm happy with the final aesthetic appearance.

My question is about the plumbing/equipment which were just completed today. We were quoted for Hayward Prologic PS-8 automation with remote to control "everything". Currently, there are only manual valves installed. I'm not sure if they plan on installing them later, but the way things have been going, I'm thinking they may not. Our last pool had a separate spa pump circuit from the pool pump, so I'm unfamiliar with the single pump for spa and pool. I wanted to post some pictures of our setup and a sketch I made to show the plumbing more clearly. I want to be able to turn either waterfall off independently, operate bubbler independently, and switch spa on/off all from the remote.

How could this best be accomplished with my current plumbing and is this the most efficient way to have my system plumbed? (It seems overly complicated and I have a strong suspicion that they don't know what they're doing due to the extra line for the unexpected second waterfall.)

In short, if they try to say they weren't planning on adding any automated valve actuators, how many and where do they need to go to accomplish what I was promised?

Edit: looking at my schematic, I can't understand why they didn't plumb the waterfall and bubbler both on the feature pump. Looks like that would have simplied the automation and allowed operation of the bubbler without stealing flow from the pool/spa.

Thanks for any help.

Below is the way I see your water flow.

They should install motorized actuators connected to the Prologic system on the valves marked A to switch suction and return between pool and spa when you select POOL mode or SPA mode.

The Prologic has a SPILLOVER setting which will set the suction actuator to POOL and the return actuator to SPA where you can have your spillover running into the pool.

The other valves you have to set manually to set the amount of flow you want.

This make sense to you?

It looks like the water comes out of the heater and makes a 90 degree turn directly into the flow switch. It is heard to see back there in your picture.

If that is the case see page 11 in https://hayward-pool-assets.com/ass...nuals/AquaRite-AQR-Operation-Installation.pdf where it says:

IMPORTANT: There must be at least a 12" (25cm) straight pipe run before (upstream) the flow switch. If the switch is plumbed after the cell, the cell can by counted as the 12" (25cm) of straight pipe. To ensure proper operation, verify that the arrow on the flow switch(located on top of gray hex) points in the direction of water flow.

Many folks don't have the full 12 inches and their flow switch seems to work fine. But a new installation should not have it so tight.

I would have them move the flow switch after the cell as the cell counts for a straight run.
Reactions: jimmythegreek
J

I agree and I have a pet peeve on valves. When you plumb a system with 2" pipe you use 2x2.5" valves not 1.5x2" valves. You have couplings glued to the outside of most of those valves restricting flow at the pad plumbing. At least you have seperate pumps. When you lay out a system with water hogging features like bubblers and waterfalls you want every bit of flow you can get. It's easy enough to add actuators they get added last usually ny the only guy that knows how to program the controller

What do you think of the fact that you have two pumps running from the same suction lines??? I thought that was a no, no...

LordDunlow said:
I want to be able to turn either waterfall off independently, operate bubbler independently, and switch spa on/off all from the remote.
Click to expand...

That would take...5 valve drivers.... I believe your automation only comes with 4 drivers...

What would be the purpose of a waterfall into the spa?

I knew you lived in Florida when I saw the equipment pic...

Jimrahbe said:
I knew you lived in Florida when I saw the equipment pic...

I thought about commenting on the small filter size but since it was already installed...
J

I was gonna say something about the filter too.
Good catch Jim I looked quick and thought the pump had it's own feed. Looking closer its Td in and separated with a 3 way valve. That works but a wrong turn of the handle and the pumps will battle eachother. Dedicated lines is the proper way
L

Thanks for replies, everyone.

Spoke to pool builder today and they said they always put actuators when they program everything.

One thing this pool doesn't seem to have plumbing for (and the person I spoke to said they don't do) is an overflow drain. That seems odd to me because Florida gets massive rainstorms. I had to drain my pool in Tennessee often. Is there something different here in Florida or is this something I should demand?

That small filter will be fine as long as you keep the pool algae free. Get a big algae problem and that filter will clog quickly and be a pain to clear up the algae bloom.

If you don't have an overflow drain then get a submersible pump and know where you can drain water to when a hurricane hits.

Your filter will be fine... For some reason, almost every Florida pool we see. screen-room or not, is about the same size as yours.. It is not what we generally see from the rest of the country.

If it is not too late, I would have the add an overflow.. It boggles my mind, why in the "land of the afternoon thunderstorms" it would not be a standard item.

You want to make sure that the two pumps can never suck water from the same source at the same time. 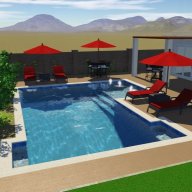 What about a check valve between the chlorination and the heater to prevent any backflow into the heater?

RobertFlagg said:
What about a check valve between the chlorination and the heater to prevent any backflow into the heater?
Click to expand...

That is unnecessary with a SWG. A tablet chlorinator needs a check valve there due to the acid in the tablets, not the chlorine.

What happens when he is running the heater and the SWG and the same time and then shuts off the system. Some Manufactures Recommends installing the SWG 3’ from the heater, defiantly not the case hear. Is there a chance that some of the concentrated chlorine can be back-flowed into the heater? And if so over time could damage the heaters internal components. I am not expert, just asking the questions.

There is not concentrated chlorine from a SWG. The SWG shuts off as soon as the pump shuts off. Again different then when tablets continue creating chlorine and acid after the pump is off.

Manufacturers who say that did not have someone who understood SWG writing their manual.
Reactions: RobertFlagg
J

Ideally you plumb the SWG in last after the heater. On a new install it should always be done this way. On retrofits they usually throw them in anywhere they can
L

I measured the line before the flow valve. Looks like it is straight for just under 12 inches, so should be fine.

Pool builder said they would plumb in an overflow.

They are finishing our plaster as I type this. I was nervous as we have lots of thunderstorms forecast for the foreseeable future (including today, but looks like the sky cleared up and chances for rain went down).

We should be filling our pool in a just a little bit! Super excited. They still have to clean up our yard and finish equipment setup, but we're finally getting there.
You must log in or register to reply here.
Share:
Facebook Reddit Pinterest Tumblr WhatsApp Email Link

Thursday at 10:57 PM
UtexasChris
U

Under construction in Tampabay Florida