Winterizing return line and there is a small leak

Jump to latest Follow Reply
You are using an out of date browser. It may not display this or other websites correctly.
You should upgrade or use an alternative browser.
E

I'm trying to winterize my pool lines. It's an inground 12k gallon pool with 1 return, 1 skimmer, and 1 main drain. I winterized the skimmer and the main drain without much issue. However, I'm having issues with the return line.

I tried a few ways to winterize the return line. I didn't have a good way to air lock it since I was using a shop vac. The shop vac blows all the water out, but it doesn't create a seal. So once I turn the shop vac off, the water just rushes back into the pipe. I tried to be quick with it and have my wife turn the shop vac off while I quickly plug it, but it really didn't work. I didn't mind too much though as I figured I would just throw a gallon of anti freeze in the pipe anyways (pipe is only about 8-10', so a gallon of anti freeze should be plenty).

The problem I'm having is that whatever plug I use is not creating a seal. It's leaking anti freeze into the pool. I'm guessing there is a leak with the fitting or something like that. However, I've never noticed a lower water level. Tomorrow, I plan to do a dye test. Is it possible that there is a leak/crack that is causing water in the pipe to get past the plugs yet doesn't cause it to leave the pool entirely? Not sure if that makes any sense.

Here are the different things I tried. Any help would be greatly appreciated!

I should also add, I dropped the water level just below the skimmer. The return is actually quite a bit lower than a normal return. It was originally a vacuum line but was converted to a return line at some point in the last 45 years.

1. I plugged the line with a threaded plug with teflon tape taped in the correct direction. I then put some anti freeze in the line. After about 1/2 of a gallon, my wife noticed that anti freeze started leaking out. The picture below shows the plug and anti freeze leaking out (hard to see). 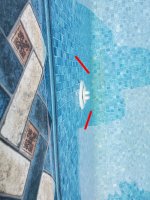 I then tried tightening the plug even more. I think it was a big mistake, but I was having a hard time getting leverage as I'm reaching down probably 28-30", so I took a screw driver and put it between the plug to get extra leverage. After tightening it a bit more (but not doing it as tight as I could possibly go), the leak was much less, but it was still leaking a bit. 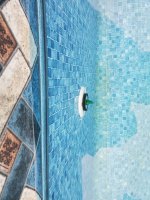 3. Tried using a #9 rubber plug as it could get back more into the pipe instead of just in the threading like the #10 plug. Noticed same issues. 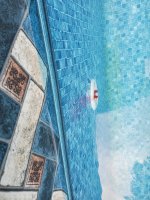 4.
I used this PVC elbow that comes up above water to blow out the line. I went ahead and added anti freeze (with food dye to see leaks) anyways. There was still a small leak. I did use teflon tape and taped in the correct direction. 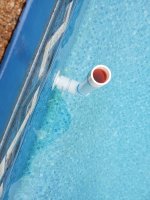 At this point, I'm a bit frustrated and lost. In prior years, we've had a company close the pool. I have a strong feeling this leak existed when they did it too, it probably just went unnoticed. In fact, without the food dye, I would never have been able to tell.

I want to try using a #8 plug and plug the actual line that is behind the fitting. I think if I plug the actual line, instead of the threaded fitting, it might solve my issue. I have the plug, but I have to shove it way back in there and I'm worried I will struggle getting it out in the Spring. Here is a picture of how far back I have to put the plug. You can barely see the blue wing nut on it shoved into the line. I didn't tighten it because I thought I might not be able to get it out. 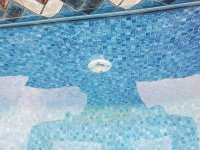 I found these extended rubber plugs and I think I might give that a try. It should allow me to get it out okay in the Spring. 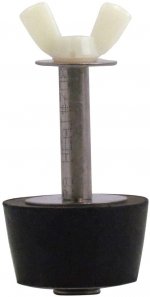 I think as a last resort, I'll use whatever plug appears to leak the least. I'll also use a closed cell foam rope in the line. I've been given advice that the foam rope will help protect the pipe from bursting when freezing.

Lower your water below that return, blow it out until no more drops come out, add antifreeze then plug it.
E

Thanks for the reply. Unfortunately, I can't drain the pool that much. We have a very high water table and I've already had my 2 year liner float on me and cause wrinkles.

I did talk to a couple pool stores today to just get their opinion. They weren't too much help (wasn't expecting much), but they all agreed it was probably just the threads in the fitting that were cracked. One store said it was possible for a professional to replace the entire fitting by pull back the liner. I sort of thought you would have to also break the concrete and fix it from the other side of the metal wall too, but I guess not?

Anyways, I took everything apart and looked at the threaded fitting definitely has a crack. I have no idea when this was last replaced. Can't imagine it was replaced when the new liner was put on in 2019. Here is a picture that shows the chunk of plastic missing at the top of the fitting: 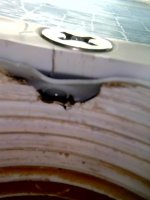 So I guess it makes sense as to why I can't get a good seal.

Here is another picture looking at the return line. There are a few cracks on the faceplate. They were there in the Spring. Not sure if they were there when the professional closed it in the Fall last year. They don't appear to be causing a leak in the pool at all. 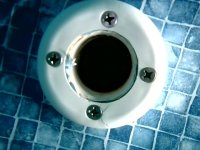 The pipe on the other end of this fitting is a black poly pipe. I think if I could get a rubber plug in there, it should be fine. A couple of the pool stores said not to do it as it could get stuck in the pipe. I'm thinking though if I use a large cone shaped rubber plug or an extended plug, I'll hopefully be okay.

That fitting still has enough threads for a duck plug to seal it imo.
You must log in or register to reply here.
Thread Status
Hello , This is an inactive thread. Any new postings here are unlikely to be seen or responded to by other members. You will get much more visibility by Starting A New Thread