Over the past year I had an IntelliChem and acid tank installed. The installer is a certified Pentair installer, and has a very good reputation. However, after seeing him do the install and having some issues along the way, I have a strong feeling that (prior to my install) he's most likely never done this install before. He worked out all the kinks during the pool season and the unit eventually operated correctly. Once it did it was really a pleasure to have (much less maintenance on my part, which is good with my work schedule).

My current problem is that he closed the pool and winterized everything according to what he thought should be done, but I know that he didn't do it right. For example, he at first didn't remove the ORP and pH sensors from the IntelliChem's flow cell, and he didn't drain the flow cell (instead he added some kind of pool antifreeze in there). I looked at the IntelliChem's manual and saw that it says to definitely drain the flow cell, and it's related plumbing, and to remove and store the sensors.

He also didn't drain the acid tank, which I wasn't sure was correct. Per Pentair's recommendation, I was using a 50/50 water:acid mix in there, and about 1/3 of the tank is still full. I questioned him about this and he's saying that I shouldn't worry about draining the tank because (according to him) the water+acid mix won't freeze - is that true?

Does anyone have a IntelliChem and/or acid tank that is winterized? If yes, I'd truly appreciate it if you'd let me know what is done to winterize them.

As far as the flow cell goes, I figured out how to remove it so that I could drain it, but there's a U-shaped tube inside of the flow cell that I'm not sure how to drain (or if I need to). Also, since the ORP and pH sensors are removed now, there are openings where they used to be screwed into, meaning that water will get in over the winter and freeze. Any thoughts on what to do to seal those openings without causing any damage?

Also, what about the electrodes that run from the IntelliChem and connect to the top of the pH and ORP sensors? Are those okay to just leave disconnected and outdoors during the winter?

Thanks so much for any info!
D

So I heard back from Pentair and all they responded with so far is that the acid+water mixture should not be left in the tank, as it can freeze over and cause damage to the container. Good thing I didn't listen to the "certified" installer. I wonder how much training a company has to do to become a certified installer - seems like this installer doesn't know much when it comes to the IntelliChem and acid tank.

I'm still waiting on them to get back to me regarding how to properly winterize the IntelliChem.

You could simply add more concentrated acid and the freezing point will rapidly drop below -60C.

The probes should be stored in doors with the tip typically submerged in a solution that protects them from drying out. For pH probes, that's typically a saturated KCl solution. I don't know what the ORP probes use. Do not use straight distilled water as that can often damage the probes. Contact the probe manufacturers to know what to do.

You could simply add more concentrated acid and the freezing point will rapidly drop below -60C.

The probes should be stored in doors with the tip typically submerged in a solution that protects them from drying out. For pH probes, that's typically a saturated KCl solution. I don't know what the ORP probes use. Do not use straight distilled water as that can often damage the probes. Contact the probe manufacturers to know what to do.

Thanks so much for this information. No, we definitely don't get as cold as -22F, so its sounds like I can leave the acid+water mixture in there as is.

I have already removed the probes and screwed them back into plastic storage caps that they came with. I noticed a sponge inside the storage caps - I didn't wet them sponges as the winterization instructions from Pentair only mention storing the sensor tips in liquid if I don't have the containers.

The manual says: Store the sensors with the included plastic sensors storage caps if removed from the Flow Cell for more than one hour. If the storage caps have been misplaced, store the probes individually in small glass or plastic containers with clean water covering the sensor tips.

Great suggestion about the threaded plugs. The only thing is that the plug will have to be long, as the thread location is somewhat deep in the top sockets of the flow cell.

Here's a picture of the flow cell, so you can see what I mean:

I'll try to find something at the hardware store tomorrow.

The only other thing I'm not sure about is what to do about the sensor cables (not the sensors). I'm not sure if leaving them out in the elements is okay or if I should be disconnecting them from the IntelliChem's control board. This is the part I'm referring to:

Maybe a short piece of threaded PVC pipe with a cap glued on one end might work. A cheapo solution would simply be rubber stoppers or cork.

As for wires I would just coil them up and zip-tie them closed in a plastic bag. No need to disconnect them from the control board.
D

So I'm in the same boat, just a year later - wondering how this all turned out.

Did you end up leaving the acid in the tank? I have under a gallon left, but my tank is bolted to the pad, so I can either:
A.) pump the remaining acid out (not sure what I'd do to dispose of the acid once I got it out of the Pentair container...)
B.) unbolt / move the entire container inside (I don't really want to have acid in the garage)
C.) Do nothing and hope for the best (this isn't how I operate)

Did you find a plug for the top of the flow cell? I plan on pulling the sensors and putting them back into their cases, but I need to figure out how to cap the flow cell to keep it from accumulating rain / snow water....
J

Yeah, I ended up leaving the acid in the tank and it was fine. I keep it as a 1:1 water to acid mixture, so it wasn't all acid. I was iffy on doing this, but I didn't have any issues with the tank this year. Seems like it can hold up and contain the acid long term (at least with the 1:1 ratio I use).

No, didn't find a plug for the flow cell. Ended up removing it and bringing it indoors - it unscrewed pretty easily.

I ended up removing the sensors.
B

Hi guys, I know its an old thread, but I'm in Dallas. It gets to about 20-30F degrees, once in a while. Do I have to worry about removing the probes and draining and all that? Or can I just leave the intellichem as is during our more mild winters?
D

I'd recommend pulling the flow cell and the probes... You don't want that to freeze... You can turn off the water shutoff coming into the cell, and just take that part out.

What do you do with the rest of your pool? Do you blo anything out, shut down the pump, or just let everything keep running?

Hi,
I’ve just winterized my IntelliChem. These are the detail to clarify further the above discussion and get feedback, if there is anything different to be done.

Power off
Shutoff water flow to the cell
Removed the probes
Cleaned them
Placed in storage, filling caps with the electrode storage solution
Drained the cell
Wrapped the exposed wires in plastic bag
Left the acid and bleach 12.5% in their tanks as we keep the pool/spa open over the winter, using the spa. Avg low in Jan is about 32F, sometimes it might briefly be in the low 20s.

I welcome any feedback. 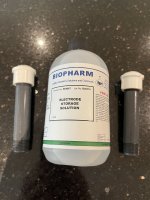 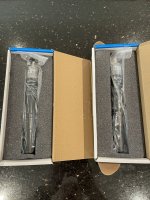 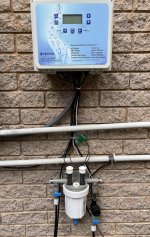 If I were you, I would look for one of these insulating irrigation valve bags that they sell in my hardware stores and cover the cell with it. You might also consider removing or insulating all the tubing. I would remove the tubing if you are able to safely cap off both ends. Freeze damage is real and even a small amount of trapped water in the wrong spot can freeze and crack a plastic connector.
You must log in or register to reply here.
Thread Status
Hello , This is an inactive thread. Any new postings here are unlikely to be seen or responded to by other members. You will get much more visibility by Starting A New Thread

Install the forgotten IntelliChem or take a refund?