Our winter cover does not look right to me, what about you?!? Should it have so much air near the walls? (Leaf net is preventing an accurate visual as the winter cover is a few inches below the net still...)

I live in an area where we can get multiple feet of snow on the ground at a time along with drifting snow & high winds!

Currently trying to figure out what our water level should be (every manual says something different) & what our winter cover should look like. As it looks right now, with the pillow in the middle and water 6” below return, our cover is resting on the water only at the base of the pillow however, as the cover gets closer to the side of the pool the cover starts to taper up and is filled with air (it’s like a slide into the middle of the pool). Our cover, though correctly sized for our pool, does not overlap much and when wrenched down, tucks up under the top rails. There is not enough extra cover to lie it flat against the water all the way to the pool sides nor is there enough to leave much cover to hang over the outside of the pool! This seems like it will put too much stress on the pool? We had planned on wrapping the cover to seal out the wind as the wind has lifted it off already however we don’t have much excess cover to even seal...

Any suggestions as to what we need to do? I am thinking we need to raise the water? Attached is a picture of current set up, (with leaf net on as well) 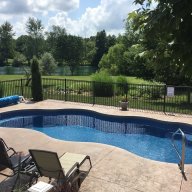 I haven’t had an AGP for years but it looks ok to me. if you get a lot of precipitation, the pool water level will rise and drain out skimmer. So don’t need to add water. If you get heavy wind, maybe some added weight to cover edges,( exp. sand filled bleach bottles ) attached to cover.
C

Thank you for the reply. This may sound like a silly question but, if we have a solid winter cover & all of our inlets are capped, how would we get any water into the pool over the winter? 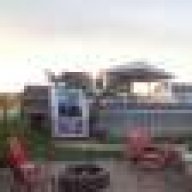 Looks exactly like mine did when I covered ours, I also lower 6" below return.
We also live in an area that gets much snow and we live in the highest altitude in our county so we get "WIND" when they say breeze.
Our cover has also lifted and whipped strapped down causing the water that I placed on top of cover to shift from end to end, once the timing was just right that most water was on one end and froze.
I bought a bunch of clips they make to clip on top rail and cover, added securement around edge, never used them.
I also thought about the plastic wrap in this same area but have read it does not work that great.
I have never had luck with those cheap blue air pillows, twice, they looked good but after water froze solid they deflated under cover and when the snow built up my misery of removing snow got worse.
Not certain of the material your cover is made of, but can't believe it would be total water proof to not let some water penetrate into pool water.
I encountered , a couple years ago , snow putting pressure on the side walls ( top rail) , noticed due to cable around pool being banjo tight and ripping grommets out.
Not cool, this also caused the cover to get holes from the metal caps on the uprights holding pool wall.
Not that I did not remove built up snow on cover, I did that almost twice a week even after light snowfall, which got very tiresome, but eventually the snow does melt a little and through the course of a winter will have snow you cant get out because its froze.
The main reason I actually never used the top rail clips or plastic wrap is when I had my super tight cover, I released tension on the cable and tossed cover edges into pool, would not want to have to unwrap and remove all that in winter in a big hurry. luckily I saved in time what could have been a mess and no wall buckle at all. I now do not cover at all and don't have to worry about snow build up. I see you have trees so that may not work for you. One option could be cover pool until leaves have done falling then remove for winter. Too make it easier maybe a mesh cover since they are lighter and do that same thing.
I have new clips and cover in the garage attic never to see daylight unless I sell them. Over the winter into spring, my water level will be about 1/4 way up into skimmer so not much tap water to refill but I do have to fill and re connect all equipment that I store in garage, including sand filter, fairly early while its still fairly cool / cold due to no cover to avoid algae issues..

Pool looks fine. Don't worry about it.
I

That's similar to how mine looks, but I no longer use a pool pillow. I usually run a single cord under the cover; the purpose to help me retrieve the cover if it sinks while trying to get it out. I havn'e needed it for that purpose in 6 years.

I only lower my water to exactly to the bottom of the return. More will get displaced as rain/mented snow gather on top of the cover.
K

Getting rid of the pillow might add a little more slack in the liner. 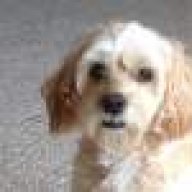 You would think that with agp's having been around for decades there would be a better science attached to this aspect of owning a pool. But as you see when you try to find the best way to do this there is none. Everyone asks the same question, and everyone is apt to get atleast 3 different answers.

I believe when it comes to basic pool care its all the same , once it comes to open/ closing and such it narrows down pretty fast to geographic locations and pool surrounding vegetation, trees, soil and the like.
You must log in or register to reply here.
Share:
Facebook Reddit Pinterest Tumblr WhatsApp Email Link
Top Bottom