Hello,
I had my gunnite pool replastered after chipping 6 days ago. This is just regular plaster, not pebble tec.

Even prior to filling with water, the steps had strange white streak, which the plaster crew kept stating "they can cosmetically make it better" but the crew member sort of handed to one another and at the end, no major change was noted.

Starting from the first day, I saw the streaks over the stairs -- then now the walls, and now the bottom of the pool. Just about everywhere now that there are no longer plaster powder -- streaks that are not fading - I am brushing the pool at least 2x a day and have had start up serviced by pool professional following national plaster council guideline

How can I remedy this? Would any chemical addition possibly help? Or is this just going to continue to get worse. 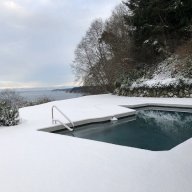 I fought this whole fight from here to there and back for weeks in another thread couple years ago.

One color plaster is a white cream with colored particles in it. During application it is very common for the cream to separate and come to the top resulting in light colored streaks and smudges. If the discoloration is rather random and variable it looks like clouds. It can be made worse by hard troweling, late troweling, workman standing in on spot too long, and application in cold/hot weather. But even without these it is common. In fact, on careful reading our contract says

Quote
Pool Interior Finishes are composed of materials which may have inherent shading and/or color variation which is normal and should not be construed as a defect. Due to environmental factors such as humidity, temperature, etc., during the installation process, normal color variation within a surface coating, also called normal mottling, which is generally uniform shading, blotchy or cloudy appearance across the surface of a cementitious surface coating may appear. These variations may be more pronounced on a cloudy day or at night with the light on. These conditions are beyond the contractor’s control. Discoloration or mottled-shade variation is not considered a failure or defect, but is a characteristic of most cementitious products, not needing remedy. It is a normal occurrence of most exposed aggregate finishes to have variation in the surface aggregate density, or variations in the concentration of aggregates across the finished surface.
Unquote

But of course I read this in a cursory manner and signed it so I was rather out of luck.

Unless, you can demonstrate that yours is worse than "normal mottling". Which I failed to accomplish.

The good news? Where the discoloration is the smudgy cloudy type, over time we have grown to rather appreciate it. There remains, however, some areas of severe streaking which we still find objectionable. But the cost of repair is prohibitive.

So is my take on cloudy uniform color plaster.
Reactions: Poolbreh and HermanTX
K

Hello,
Thank you for your input engrav. I had the plaster company come out today and they agreed the streaks and white smudges throughout the pool was not acceptable.
They are willing to do sanding/polishing. Or possibly acid wash. But the concern I have for sanding/polishing is how is it going to affect my plaster as it is only 1 week old.

1. is draining water detrimental to fresh plaster (or should they work with full pool)
2. is doing sanding detrimental to fresh plaster (as my understanding was not to scrub the plaster too hard during brushing or avoid using wheeled vaccum w/fear of causing denting on the plaster)
3. gentleman said that he did not use any calcium. So, he is suspecting quality of plaster cement to be the culprit as my start up was followed to the "T" and I had my pump run full speed 24/7
4. without understanding which is more detrimental (polishing vs acid), I asked if they can do acid, it seemed there was some hesitation. Is this acid treatment possibly going to harm my plaster?

I would really appreciate your help, learning so much from this forum already.

Both do some damage to the plaster. And the fix does not totally fix the problem. So it is a very personal choice. We chose to not "fix" it, no sanding, no acid. But others on this forum made the other choice. And then I suspect all of us rationalize our decision to be correct. One thing I did not do is hire one or two or three consultants to come out and advise. You could do that. Hire / pay a pool consultant to inspect on site and advise for your particular situation.
P

I just saw your question. After an entire summer of going back and forth with the plastering contractor as to the issue and who was at fault we finally have satisfaction. The problem the entire time was scaling. The NPT Pool Quartzscape Barbados Blue color that we chose scaled before we even had the water in the pool. I had the manufacturer come and do a site visit. He said the solution was simple. Jacks Magic#2. This treatment does not require the pool to be drained. My plaster contractor, at his own cost, started the treatment on September 16. By September 17 the pool looked totally different. It looked like the pool that we had envisioned when we picked the color. The pictures you posted appear to be the same issue.

We finally have the color we wanted without any blotches or streaks. Keeping up with the PH and the Total Alk will be the keys top keeping it that way. 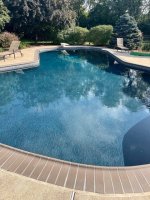 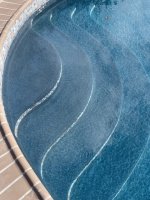 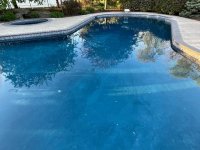 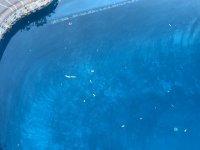 and I hope this helped!
You must log in or register to reply here.
Thread Status
Hello , This is an inactive thread. Any new postings here are unlikely to be seen or responded to by other members. You will get much more visibility by Starting A New Thread

A
Black streaks in new plaster

Under Construction Jul 9, 2022
AS1518
A
M
Alkali Staining and Sealing Limestone WaterLine Tiles