What would have raised my TA? 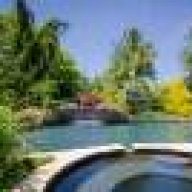 I posted recently about a possible pollen or algae problem. My overnight tests were all still in the normal range, but the water just looked dull and with the slightest off-color tint. It's a black bottom surrounded by trees, so with being super reflective it can be hard to gauge. I raised the FC from 3 to 12, but the water didn't look any different. Tired of the uncertainty I just decided to raise it again. I ran over to Walmart for a few jugs of LC, but they were all out. Here's where it gets iffy - my CYA was also on the lower end (60 rather than ideal 70+), so I decided to use trichlor (I know, I know) rather than juggling a bunch of bleach jugs or driving out of town to the nearest open pool store that sells LC. Ijust completed my overnight test, and once again have passed. The water still seems a bit dull, but the color has it's more typical blue tint than it had had previously. I don't believe there is anything growing in my water. I'm not sure why it doesn't look crisp, but if you look back at previous posts from me, I've had this problem ever since converting to salt. My concern is what caused my TA to increase so much so fast and whether I need to lower or leave as-is. I thought the trichlor would lower it? I performed the test twice with the same results, and my previous test, 80, was only slightly higher than the 72 reading from the pool store, so I believe it too was accurate. With my daughter's broken arm, we haven't used the pool much, maybe 2 hrs total this week. I'm listing my current levels below with the previous pre-trichlor levels in parentheses.

You seem to have a couple items in this thread. You mention the dull water following a previous SPAM and also have a concern for TA. So let's start with the easy one - TA. Don't worry about it. Whether 80 or 100, either is fine. TA shouldn't go up unless fresh water was added, you used baking soda, or perhaps a small testing error. But as long as you are able to manage your pH consistently around 7.6-7.8, the TA is fine.

For the dull water and apparent good OCLTs in the past, it's hard to tell. I will say that with your previous SLAMs, if you didn't follow the protocol by maintaining the FC level 24/7 until the water was clear, that may be part of the issue - even if you passed the OCLT. You mention that the water seemed to get more blue when you increased the FC which also makes me wonder if the chlorine level wasn't maintained well enough before. Looking at your pool details, you have a variety of areas that need to be inspected and maintained well during a SLAM Process like a spa, waterfall, perhaps a main drain, light niche maybe? The OCLT is generally a good tool to see if a SLAM is required (or done), but there have been unusual circumstances where water clarity was a primary factor. You'll have to evaluate all of those together.

I can't say why the CYA hasn't increased yet. But remember that the CYA test does have a 10-15 ppm swing in variance just because it is so tricky. Maybe compare once again in 2-3 days to see.
You must log in or register to reply here.
Share:
Facebook Reddit Pinterest Tumblr WhatsApp Email Link

S
Would either of these snow melt products work/be safe for pools?

Dec 30, 2020
superuser
S
B
Why would FAS-DPD test give different results

How much water from hose would cause an issue (iron)

B
Proteam Supreme Plus raised TA

Test Kits - what would you use?