What to do until test kit arrives? 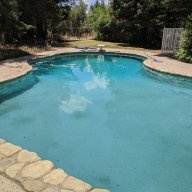 I have been reading Pool School all day! I have a few questions on how to get by for the next week until the test kit arrives.

Bought this house in Aug '20 and we were pretty sure we'd have to have the pool resurfaced. It has an aggregate or pebble surface -- at least parts of it -- but it's hard to tell the real condition of it. Some parts seem bleached out, other parts splotchy, other parts dark black. It was stable over the winter but turned green a few weeks ago. We blamed the mallard ducks who adopted us for their nesting season.

Found TFP and really dug in today, and now I suspect there's more to it than the ducks (although I'm sure they didn't help). Now I know we have both green AND black algae, the black algae was here before we moved in, and I'm guessing the CYA levels are way out of whack from using tablets (per the former owner). But I feel hopeful!

Recent history: We've been keeping the chlorine level high with dry shock, sweeping daily, and running the pump 24/7 (and cleaned out the cart filter 2x) but we're literally dumping money down the drain and not seeing much change. It's better than it was 3 weeks ago, but not fixed. Our basic test kit only indicates that the chlorine level is more than 3.0, but after all that I've read today, I understand that there is SO much more to it than that!

We were on the verge of draining the pool so we could really get in there and scrub the black algae (without donning a diving suit). But I got a little scared of that approach after reading some horror stories, so now I'm thinking we'll try a SLAM first along with all the black algae recommendations. I have a steel brush on the way and a Taylor K-2006 test kit due next Saturday.

We can't officially start the SLAM until the test kit arrives, so in the meantime, should we...keep the filter running 24/7? keep adding dry shock or start using liquid chlorine? keep brushing daily? do anything about the pH? (it's on the high side, around 8.0) start scrubbing on the black algae? (steel brush due to arrive Monday)? Anything else I should or should not do this week?

Thanks in advance! I look forward to learning a lot more.

There are a few things you can do right now:
- Adjust your signature to better show the actual pool and equipment info (gallons, filter, etc). See mine as an example. Also include which test you are receiving.
- No sense starting the SLAM Process yet since it's very possible you may be exchanging some water.
- Is your area known for having an elevated water table which could result in a pool lift or pop-out? If you're not sure, call around some pool stores or builders and ask. You can also call your county. The water table and current situation of the soil will dictate how dangerous a full or partial water drain might be.
- Start shopping for chlorine. You will need to know in advance you have a good source since many places seem to be running low. I would avoid using anymore dry or bagged products at this time.

Any chemical you add now will probably go down the drain (or lawn). If you have a way to adjust the pH, bringing it down to the 7s won't break the bank and it reasonable to do, but it won't do anything for the algae. Once you get the test kit, post back with full results and we'll go from there.

Thanks for the reply, @Texas Splash ! I appreciate the suggestions.

One question about liquid chlorine: how much should I have on hand for this project? Never mind, you need to know my pool size first. I'll be back.....

Kalico said:
Never mind, you need to know my pool size first. I'll be back.....
Click to expand...

You will need the liquid chlorine for the rest of the summer. Just keep in a cool place, out of the sun.

Thanks @mknauss much appreciated. I've generally figured my (curvy) pool to be 22000 gallons as a starting estimate (and it is now in my sig).

Fortunately, we have not reached swamp status yet (we brought it back from the brink). It's currently hovering at a light layer of green on the bottom and sides which, when brushed, turns cloudy until it settles back to the bottom. And then there's the black algae, confirmed yesterday with the smudge test.

What you're describing here is very helpful for calculating, thank you! I am guessing right now that my CYA levels are probably quite high, so might have to do a partial drain. So should I hold off on this quantity of LC until I get my test kit, and just try to maintain it for this week? Or are you suggesting I should do this now, even before testing the other factors? TIA

If waiting for a test kit, it is best to add 5 ppm FC worth of liquid chlorine each evening with the pump running. In your pool, that is 1 gallon of 10% liquid chlorine.

Thanks so much for the advice!
Reactions: mknauss

That will just keep you in a holding pattern until your test kit arrives. Hopefully your CYA and or CH aren't thru the roof, but if it was maintained with tablets or granular chlorine, a partial or full drain will be in your future.

Thanks @DeanP66 - Yup, got it! And my test kit arrived early, so I have already done my baseline tests and getting ready for the Big Day. I have a new thread about the SLAM here: About to embark on a SLAM....

Totally appreciate all the folks willing to jump in and help. Awesome forum.
You must log in or register to reply here.
Thread Status
Hello , There was no answer in this thread for more than 60 days.
It can take a long time to get an up-to-date response or contact with relevant users.

B
Treading water until some supplies arrive

First test on a new pool

Just Getting Started Yesterday at 8:55 AM
reggiehammond

P
My testing kit is delayed

B
Hello to Everyone