What Does It Take To Fix This? 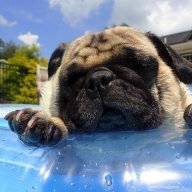 So, opening the pool went well chemical wise, but that's where it ends. Apparently our brand new utility pump was a dud and I haven't been able to drain the pool down to proper levels yet. So then I sat there for over 4 hours lowering it the best I could with a dang wet/dry vac. Yeah, don't ask. Anyway, it worked well enough. So then I go to manually vacuum the pool and I notice it loses suction. I lift the thing in the skimmer basket area and the basket is busted into a ton of pieces. I fish that out and go buy a new one. Meanwhile it rains! A TON! And we're back to square one with the water level. But we finally get a sunny day today and I go to manually vacuum again and it works for a little and then loses suction again. At his point I'm afraid to look in the skimmer basket in fear of another crushed basket. I look and notice the basket is down BELOW where it is supposed to sit but not broken. I finagle it to come out and notice the lip that the basket sits on is cracked in one spot. Which is probably why the first one broke. So my question is how hard is it to fix of replace this? What ABOUT should the cost be? Thanks a million.

SORRY BUT I JUST NOTICED I PROBABLY POSTED THIS IN THE WRONG AREA. PLEASE FORGIVE ME AND PLEASE MOVE IT IF NEEDED.

I believe you have a Hayward skimmer and need Hayward Ring, Basket Support - SPX1082D - INYOPools.com

You should try and find numbers on the skimmer or old ring to confirm.

Thanks so much!!!! How do I get this ring off/out? Just pull it up? It comes off indipendant of the rest of the plastic housing all around it?

Read the Q&A on that page. There are install tips in there.
Reactions: SummerTimeGirl
J

It might be glued. Try pulling up on it to see if it pops loose.

Are you sure that you have the correct basket?

Does the basket have a part number stamped on the bottom?
Reactions: SummerTimeGirl

Thanks. Yes I have the correct basket. Was the same as the previous one (that was here for years) before it too got sucked down into the hole and broken. Never happened before and the only difference this year is that missing part of that lip.

So it lifted right up with no issue. But not sure I'm finding the correct size replacement. The outer ring is measuring 8 5/8 and the inner ring measures 6 3/4. Not sure the ring in the link would fit.

There are also NO markings or parts numbers on this thing at all.
J

I think that it's the right part.

Is there a part number on the bottom of the basket?

What is the part number on the skimmer lid?

Awesome!! Thanks so much!!

Ok, so I ordered the new support ring. Got it today and went and put it in place. Decided to try and vacuum AGAIN and placed the skimmer basket in, set up the manual vacuum and started. Well, it worked for about 10 min then I heard a pop type sound and noticed the thing was losing suction again. Go and look and the Dang basket is AGAIN sucked down UNDER the support ring! Luckily the basket didn't break like last time. So, what gives? Why does this keep happening to me? Any ideas?

Everything went smooth with opening this year except the guy told me a seal or gasket or something was leaking and it had to do with the motor or motor area. So he replaced it. Not even sure what it was because he didn't even put it down on the receipt which I still have here. Otherwise I'd tell you exactly what he fixed.

Also, since that "fix" the Dang motor runs very loud!! But after he made the fix and left the returns had no water coming out of them. Couldn't understand why. Finally figured out, because I remembered a similar issue last year (actually last years issue had to do with the solar heater), that the actuator (?) valve was in the middle/off position (via the toggle switch that's underneath). I then switched it towards position 1 and the returns started working. At least I THINK I moved it to position 1. Sigh Anyway, after going back now and reading an old thread from last year, it appears that I was supposed to have it set to position 2. Which I just got done doing.

So, I wonder if that is why that kept happening with the skimmer basket? Now that it's in position 2 like I stated in my posted from last year, I wonder if it will be ok and stop sucking the basket down? I'm so confused? And really scared to try vacuuming again.

Sounds like your motor was replaced with a higher HP motor that is creating too much suction which is breaking your skimmer basket ring.

Post a pic of the label on your current pump and motor. Do you have any deatils about the motor that was replaced? Your signature has no details about your pump.

Also post pics of your valves and lets see if your suction can be reduced when you are vacuuming.
O

We were having a lot of issues with out baskets because of our neighbors Birch tree. I could clean the pool and instantly it would be dirty again with leaves and seeds. The seeds would get so bad that the skimmer would fill up and suck the basket down. This year I purchased a "Skim-A-Round" basket solely for the reason that it's much thicker and more sturdy.

No, they didn't replace the motor at all. Just a gasket or seal or something.

I will just refer you over to this thread from last year cause it has all the pics and set up about the plumbing.

Can Someone Help Me With My Solar Heater?

We are relatively new pool owners (3 years now, came with the house we bought) and still pretty clueless with many things. The previous owners briefly explained some things to us but pretty much said, "there is a book in the shed that explains everything". And it sorta does, I guess, but other...


ajw22 said:
Sounds like your motor was replaced with a higher HP motor that is creating too much suction which is breaking your skimmer basket ring.

Post a pic of the label on your current pump and motor. Do you have any deatils about the motor that was replaced? Your signature has no details about your pump.

Also post pics of your valves and lets see if your suction can be reduced when you are vacuuming.
Click to expand...

I looked at your pics. When you Manual vacuum you turn the main drain off and the skimmer on?

You need to modulate those valves and find an adjustment that works. Don't turn the main drain totally off and don’t turn the skimmer all the way on. You need to find a setting that gives you enough suction to vacuum and not enough to suck your basket down.

It will take some trial and error to find a setting that works.

Ok by why suddenly do I have to do that when I never did before? Like, what changed is what I'm trying to figure out. Nothing is new or replaced other than whatever piece he replaced last week. I was hoping the mistake would have lied in the fact that I had the actuator switched to position 1 instead of 2. But I guess not? Thanks so much!!

When I manual vacuum I do as the book we have says:

ajw22 said:
I looked at your pics. When you Manual vacuum you turn the main drain off and the skimmer on?

You need to modulate those valves and find an adjustment that works. Don't turn the main drain totally off and don’t turn the skimmer all the way on. You need to find a setting that gives you enough suction to vacuum and not enough to suck your basket down.

It will take some trial and error to find a setting that works.
Click to expand...

You can’t say what the guys who work on your pool hav done so it is hard to say what has changed. Yiu need to get more detailed explanations.

Your pool motor being louder then it was is a clue he did something significant to the pump.

Here are some pics of the only labels that are on the pump motor. So dang old you can't really see it (which is why I left it so large). Anyway, the booklet I have says it was a Sta-Rite Dyna-Glas Pump and Motor 1 HP. And based on how old this label looks, I'm willing to bet it's the original one.

May 20, 2020
Homebrewale
H
R
My skimmer flap stays in the down position, does it have to be changed?

Ball Valve is leaking, anyone have opinions on how to fix or where to buy the valve handle