What a difference TFP makes!

Last year, when I found TFP as a new pool owner (after inheriting a swamp) I had already gone to the pool store twice and dumped all kinds of wasted money and chems into it. A year ago today my pool was still pretty green and it wouldn't be until late June until we got it completely clear.

Now that I'm armed with knowledge I was able to properly close it; We took the cover off on Saturday and within a week or so I should have it ready to swim in. Currently doing a SLAM now and my new trusty pump is clearing it up nicely. Here's a picture from Saturday and one from today so you can see the progress.

Thank you as always TFP! 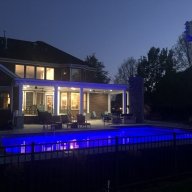 I'm a year behind you - I feel I've got a good handle on the pool chemistry as a new pool owner. Now I'm reading up on what to expect for my first pool closing and opening. Did you blow out lines with a shop vac or air compressor? Did you use antifreeze?

SouthVirginiaPool said:
I'm a year behind you - I feel I've got a good handle on the pool chemistry as a new pool owner. Now I'm reading up on what to expect for my first pool closing and opening. Did you blow out lines with a shop vac or air compressor? Did you use antifreeze?
Click to expand...

When I closed it, the pump had died so I had to drain it with a submersible pool cover pump. But I drained it below the jets, took the jet covers off and then put a Shop Vac in the return line (using the exhaust port) and blew them out. I then put on the caps. I didn't use antifreeze though.

I put my filter in the basement instead of leaving it out during the winter, and I sucked the water out of the skimmer after the pump was removed. I then closed the ball valves for the inlet and return lines to make sure no water got in. I also put a skimmer plug in too (mine's called a Gizzmo).

When I opened it on Saturday and took the jet caps off, I knew right away they were sealed properly because a ton of bubbles came out the one, and the other had some suction as it drew in water. Thankfully the winter wasn't very harsh up here but I did constantly check the water level during the winter and drained it whenever it got close to the jets, as we had more rain than snow this winter. The good part of that though was I stopped draining it in March and the rain pretty much filled up the pool except for a brief 3 hour hose fillup to get it about halfway up the skimmer.

Don't be surprised when guests comment how sparkly clear it is. I get that all the time.

borjis said:
Don't be surprised when guests comment how sparkly clear it is. I get that all the time.
Click to expand...

Good thing I got some TFP cards when I ordered new reagents
Reactions: borjis

Once the water got pretty clear I brushed and vacuumed again and then popped in the new filter. Overnight it made it super clear! I think we're almost ready to swim

We're leaving the solar cover on for a few days to soak up the heat we'll be getting this weekend, and either Monday or Tuesday depending on the weather could be our first swim of the season! The pics might make it hard to see the bottom because we still had the solar cover on this morning (I pulled it back to add chlorine at the jet)