Just looking for opinions. We were presented with the option of waterfall lighting yesterday I have to make a decision this morning as they will cap the falls column. To light the water coming out (backlit?) of the falls its $1300 for warm white and $2600 for colored. IS this option even worth the money? Do you love you lighted falls? I have 3 Jandy Water Colors lights IN the pool. One specifically shining on falls. Falls are 24 inches at the high above waterline so it won't illuminate mid falls but will surly cast a glow bottom ish? Adding this feature unnecessary or you are spending this much money get the additional lighting you'll love it? Thanks so much. 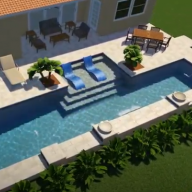 We did not get waterfall lighting but we wish we had. I don't recall it be given as an option but maybe it was. I also don't have a light on my sunshelf and wish one was there too! $1,300 and $2,600 seems like a lot of money so even now that I know I want a light, I would struggle to get myself to pay that!
Reactions: Texasgirl#

I know one of our lights will be pointed at our waterfall, but I'm also curious as to what other creative uses of lighting people have used for their water features? Ours is going to be a natural boulder waterfall, so it will be tough to light the water column itself. However, I've seen that done with sheers, and it looks really nice. I wonder if a diffused light behind the falls would look good, or if it would just be distracting?
The price jump between plain white and colored seems a bit excessive, since a lot of the cost will be installation. I know the cost was also high for led bubblers, but I think our PB only offered color changing. We opted out, and just went with the standard bubblers. Something else that could look amazing is deck jets with the column of water itself lit. I know the water feature in our hot tub has a similar effect, and it can shoot 4-5' on the highest setting and the light follows the arc of water the entire length.
Reactions: Texasgirl#
R

Following along as for we just completed our remodel for the most part. One of the items I wanted was a natural looking waterfall. Pic attached of it when it was almost finished few more rocks were added later. We did not install any lights for waterfall. However all new LED's in the pool and I am trying to determine my best way to add some light on this waterfall at night. As a side note since my new lights are pentair I have purchased two pentair landscape lights but having trouble finding a good location to place them where they would shine on the waterfall.

Find yourself an IP-68 rated light bar for outdoor or wet use and run power to the back of the rock formation. It’ll be a lot less than $2k and you’ll be able to fiddle with it to your hearts content. I use flood lights in my yard and quite literally they withstand flooding and run like a champ.
Reactions: KJB1 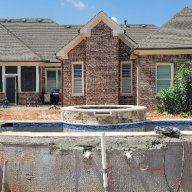 We upgraded our two 18inch and one 48inch sheer decents to led and it was right at 1,700.00 and worth it. These are the cmp which are serviceable from the front Natural Wonders® Waterfalls - CMP

I'm sure you already made the decision. Lighted falls are visually very cool. Your underwater lighting will do nothing to light the waterfalls btw.
R

PfTXPoolDad said:
Find yourself an IP-68 rated light bar for outdoor or wet use and run power to the back of the rock formation. It’ll be a lot less than $2k and you’ll be able to fiddle with it to your hearts content. I use flood lights in my yard and quite literally they withstand flooding and run like a champ.
Click to expand...

Any pics of your setup?
P

My yard lights aren’t probably the right thing. But something like this could work for your setup. As a bonus it’s solar powered so no need to worry about wiring