Jump to latest Follow Reply
You are using an out of date browser. It may not display this or other websites correctly.
You should upgrade or use an alternative browser.
B

Please help!!! The pool guy said it was normal but it doesn’t look normal at all. As soon as it’s on it works great and pressure is good for about 15 minutes. Then slowly air bubbles start to form inside the pump skimmer until it becomes one big air bubble and no water movement in the pump skimmer. And returns are down to almost no pressure. I backwashed and changed a few o-rings. I have a new DE filter just purchased last season. Any tips please?

Welcome to the forum!
Does your filter have a MPV? If so, place in Recirculate and see if the issue goes away, if it does, the filter is plugged with debris.
Can you post a full set of water chemistry results from your own test kit?
I suggest you read ABC's of Pool Water Chemistry.
P

Sounds like either a suction side leak or water level in skimmer. Are you certain the rubber gasket is fitted properly on the pump? 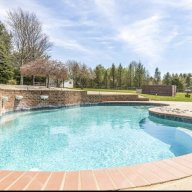 My former Hayward Super Pump did the same thing to me last year. I replaced the gasket on the cover and ended up rebuilding it with completely new gasket set and ceramic bearing seal from Amazon. Things got better but still weren’t perfect, as suggested above the grids on my filter were clogged. I also discovered I had a plastic ball valve on the return that was partially stuck closed so my flow was restricted.

I found that gasket in the square lid to be a royal PITA. It never seemed to seal up very well and one of things I discovered early on was that one of the knobs that holds it down was stripped. I ordered a new knob and barrel nut off of eBay (cheap).

I suggest that you replace the square "O-Ring" under the pump lid..