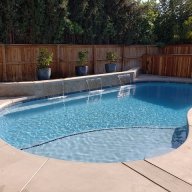 Just wanted to post this as an FYI for people seeing the same issue - for the past few months I've notice the power cord on my Pentair Warrior SI (same as Maytronics S300 / Active 30) has been sticky. I saw some other threads on here where people had the same issue and got warranty replacement. I was being a bit lazy about getting that taken care of, now I see my cable has bits of rubber coming off it. So I called up Pentair, gave them the serial number, and they are sending me a new power cable under warranty. If anyone else is seeing the sticky cable thing, probably better to get it taken care of sooner rather than later before the rubber starts sloughing off like mine and getting up in your pool filter.

Mine is a bit grainy but not bad. And 5 years old.

Good job on getting a warranty replacement.

Just thought I would update this post because who doesn't love pictures? Just got around to replacing my robot cable for the issue described above, and this is what the end in the robot looked like. If you are dealing with a sticky robot cable, this is likely where it's headed. Call up Maytronics (Pentair in my case) while you're still within your warranty period and they'll send out a new one. 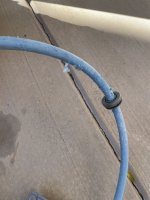 What you’re seeing is pretty standard chlorine oxidation and hydrolysis of a rubber material. It’s going to happen no matter what. My unit is about 5-1/2 years old and the cable has become very chalky and rubs off a bit when I run my hand over it. Unless the cable cracks open and exposes the wiring, I’m not going to replace it (plus it’s way outside the warranty period). But there’s nothing wrong with fixing it if you can get a replacement cable under warranty.
Reactions: mknauss and scdaren

How long is the warranty on the Warrior?

revitup said:
How long is the warranty on the Warrior?
Click to expand...

Two years.
You must log in or register to reply here.
Thread Status
Hello , This is an inactive thread. Any new postings here are unlikely to be seen or responded to by other members. You will get much more visibility by Starting A New Thread

B
Active 30 no power