Vinyl pool is leaking over winter... getting a new liner in the spring... should I keep water in it? 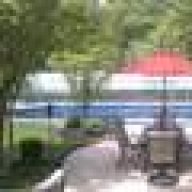 At the end of the season before last, I got a small tear in my liner. I thought I fixed it with a patch, but when I opened this past spring, my pool had mostly drained. There was about an inch of water in the shallow end. The deep end is 8 feet when full. I could see rings around the deep end where it looked like the level had dropped below the current level. The most pronounced ring lined up with the hole I thought I fixed. Thus, I assumed that was where it leaked and at some point over the winter, the water had dropped down to that level and stayed for awhile before getting partially filled back up with rain water in the spring. I have a mesh cover so water can enter.

I filled the pool back up in the spring and tried to refix the patch by placing a larger patch over it. Unfortunately, it doesn't seem I was successful because the pool was closed in September and I just checked it and it's about a foot below the skimmer, which is less than I had in it when I closed it. So it looks like it's leaking still.

Is there any danger in letting it drain over the winter if we get a new liner in the spring? We are in New Jersey and the soil is mostly sand. I've read about possible wall collapse, but that seems to be rare, especially in sandy areas. I am concerned about the bottom drain freezing. Not sure if they blow it out when closing the pool but since it is usually under several feet of water, I guess it's not a concern. If the water leaks out so only a foot or so is in the deep end, can that freeze and crack? If so, how hard is that to fix if they are putting a new liner in anyway?

Basically is there any reason why I should keep filling it up over the winter if I'm getting a new liner in the spring?

You have stated the main reason for not allowing it to drain. The danger of the dirt/sand pushing the walls out of level is there. I think it will cost more to repair the walls then to keep adding water. It is up to you to decide if you want to take the chance.

The water in the pool is what supports your pool walls. You don't hear about it since few people let a liner pool sit empty for long. If your pool does not hold water I would brace the walls using 2x4's and plywood. Jimmy will have more detailed advice.

Jimmy said this in Liner Went, How to brace? ...

You need ALOT of 2x4s to brace it well. You want them a foot down from the coping amd you lay 2x4s horizontally amd then attach lumber across the pool so it's like a spider web. You can zip screw the horizontal into the steel wall if need be. Honestly the cheapest safest way to do this is to get a harbor freight tarp like a 30x60 amd carefully lay it in the pool amd fill with water. A fully empty pool is not 100% safe even with bracing but is better than nothing.
J

Yup that was good advice by me. I would repair if possible if not keep water in it if its a slow leak. Its a tradeoff because the leak is also likely eroding the ground under or around the pool so it's a double edge sword. The deep end doeant matter so much the main weight of pool is on the walls holding back the earth. Having a concrete deck helps support it better than say having paver deck amd coping. Its a gamble either way if you cant fix I'd try to keep it at least halfway up walls in shallow end. You didn't notice the leak during swim season?
You must log in or register to reply here.
Thread Status
Hello , There was no answer in this thread for more than 60 days.
It can take a long time to get an up-to-date response or contact with relevant users.

New liner installed today... going down to 52 tonight and cloudy tomorrow. Should I keep filing it overnight? (also pictures)

Hole in the liner in the deep end. Caused from Muriatic Acid?