I have a 20,000 gallon pool run on a fixed rate pump and an old Jandy Aqualink RS16, 2" PVC pipe, with a propane heater, Spa, Triple cartridge filter and a large rooftop solar about 20 ft above the pump. I want to change out the pump for a variable speed pump but it seems I must know a few things that are difficult to determine.

The Jandy Aqualink turns my existing pump on and off on a schedule I typically change in the Spring and Fall to turn on the solar. The solar diverter is based on the Jandy plus a solar panel located temperature sensor. Is there some way to control a variable rate pump using the Jandy system somehow ( besides 240vAC on/off) and how does the variable speed pump know the solar diverter is on and has significantly more flow rate limiting and head to pump against. Do any variable speed pumps automatically adjust the RPM for flow rate so filtering and solar is compensated for? My pool also has a Spa so the flow rate would somehow need to be adjusted (automatically) depending on whether the Spa diverter was on, the solar diverter was on and as the filter cartridges resistance increases.

I've been reading it sounds like most variable speed pumps have built in timers ( at the pump in the weather) and I cannot imagine trying to set timers that somehow synchronize with the various conditions, especially the solar. Can anyone give me some ideas on how these variable speed pumps regulate, are timed, are controlled by a Jandy etc... so its coordinated and the flow rate is adequate. I'm particularly concerned that the solar is sufficient since its marginal already? Has anyone installed a flow meter in line with for example the pump or solar to make sure its ok? Do the pumps read out the flow rate. It would seem the speed is irrelevant for performance, only electric cost. But if the solar stops working, the cost savings is worthless. Does this make any sense?

You need at least Rev O for your Aqualink to control VS pumps.

@PoolGate may be able to describe how the Aqualink works with solar and a VS pump.

I am not sure exactly what you are asking, but if you click a feature button to activate your solar, then the pump can be programmed for a specific speed to go along with that. I assume you are using a JVA for solar. If you had 2 conditions both with a JVA that activates each, you could have a different speed for each and whichever is the faster speed would always win out.
P

PoolGate said:
I am not sure exactly what you are asking, but if you click a feature button to activate your solar, then the pump can be programmed for a specific speed to go along with that. I assume you are using a JVA for solar. If you had 2 conditions both with a JVA that activates each, you could have a different speed for each and whichever is the faster speed would always win out.
Click to expand...

My Jandy Aqualink RS is programmed in the Spring through fall to switch the JVA when there is adequate heat available at the panels by measurement by the pool temperature sensor and solar panel rooftop sensor. As the seasons move through April to October, there are foggy mornings and evenings occasionally, cloudy days and some trees partly block my solar panels at the beginning and end of the season. If I pump water through cold panels, it actually cools the pool. So the JVA is only switched when heat is available which is not always.

Since my old Rev I Jandy ( from 5/2000) doesn't communicate with any VS pumps without an expensive upgrade or change to another supplier like Pentair, if I just install the pump switched by the existing 240VAC relay in the Jandy, the pump has no idea when the JVA is switched to solar ( since its temperature and not time based). Changing out the pump to a nice Pentair high end pump and either upgrading 2 Jandy Aqualink RS systems plus possibly the inside the house panel would be >$5000... when I just wanted to save money on power I get for free from my PV solar.

I'm hoping to find a way to install a nice pump yet program it such it somehow knows the solar JVA position and pumps accordingly. The Jandy Aqualink has the JVA control voltage and a never used "solar pump" 24VAC output that says when the JVA is on solar but how do I get a VS pump to look at the 24VAC signal or anything other than its time based programming. If I programmed it to pump during the best solar hours, a cloudy day or fog or late season tree blockage would cool, not heat my pump and use power it didn't need to use.

I just got a variable speed motor with pump. Egads I hate it! The 20-yr-old single speed motor finally gave out, and since I live in CA, I was forced to get a variable due to the laws here. Even I got an excellent brand (Pentair) and a new booster pump (also pentair), I just hate it so far. The ONLY good thing is that it is quiet. But dang, it does not move the water the way I am used to. The skimmer no longer skims effectively. The bernouli thing I had in the skimmer basket which used to work great, now does not work at all. My Polaris does not have enough revs to get moving (even with the booster running). High RPMs (to TRY to get the polaris to run with booster) and the filter pressure is too high and STILL the polaris won't get moving. Low RPMs like suggested in manual makes the filter pressure too low and forget about trying to skim anything. The guy who installed them stayed within budget (yay), but released DE into the pool (which I am STILL struggling to clean up). And the guy won't come back to make any adjustments to get the pumps, skimmer, filter, & polaris all working together. UGH !!! Make sure whoever installs yours that you get him to agree beforehand to come back to make adjustments. I don't know if I will ever be able to get my pool open & swimmable again. :-( :-(

LSue said:
I just got a variable speed motor with pump.
Click to expand...

Can you update your signature with what pump you had installed? 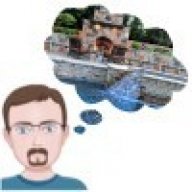 Did you only have a new pump installed or did you update automation also?
Can you provide a picture of the equipment pad as well?
Did all the valves get opened back up?
You must log in or register to reply here.
Thread Status
Hello , This is an inactive thread. Any new postings here are unlikely to be seen or responded to by other members. You will get much more visibility by Starting A New Thread

A
Fixed vs Variable speed pump for infinity edge?

C
Why No Flow Rate?