Hi All,
Im trying to figure out the best way to modernize our pool (built in 2007). We currently have a small pool remodel company helping us with a baja shelf and update the plaster to pebble as well as adding a new water feature. At the time, we didnt have the budget to update the deck but looking to see if there are any DIY friendly options? I think we have a cantilevered concrete coping and kool deck. Are there any products that can easily overlay this coping and lay directly onto the existing concrete deck? I see some travertine and porcelain paver options that lay on thin sand on top of the deck but can’t figure how the coping would work. Do I need to jackhammer the edge of the concrete to get it flush with the bond beam before laying new coping?

You do have a cantilevered coping and cool deck. I just want to comment on the pictures you provide of the pool shell. First, the reason why the old plaster is removed before re plaster is because new plaster does not adhere to older plaster very well. Looking at the pictures provided there’s a lot of plaster still on the shell. Second, pointed chisels were used not flat tipped, pointed tips remove too much Gunite and not enough plaster. Just wanted you to know so if a problem comes up later, Ray.
J

Nori, I know you PM'ed me but I prefer to answer questions publicly in case it helps other people doing similar queries

My pre-remodel coping was very similar to yours except that mine was faced with a cap tile...some of which were broken/cracked and could not be replaced because they were are no longer manufactured. 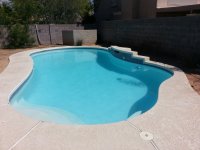 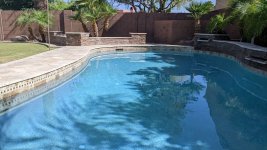 I think you understand what I did in my remodel. I used a tile saw to cut off the cantilevered deck overhang (including my cap tile), and then smoothed/evened it out using spreadable concrete so that it formed a level vertical surface with the pool gunite shell (where I had removed the old waterline tile). Then I tiled all the way up, starting with the waterline tile (replaced at the same level), a decorative 2" tile, and a cut/matching 2" tile to reach the bottom of my "NEW" deck overhang (the travertine coping). See my build thread (in my signature) for more info.

A couple issues you need to consider if you are thinking about this:

1) Most would NOT recommend tiling/grouting over the joint between the pool gunite shell (where the replaced waterline tile is installed) and the old 4" high cantilevered decking. That joint can/will move and the new grouting will crack. In my case, my pool had been there 20 years and I was comfortable with that. In reality, after 7 years, I DO have a bit of cracking in just one location, but it is not that noticeable. AND, since that joint is above the waterline, there are no concerns about leaking. If I ever decide to regrout, I "might" go with a matching siliconized grout as a replacement for just that grout line (between the glass tile and the waterline tile).

2) Laying any kind of new pavers (like I did, and like you are considering) over a cantilevered deck raises your deck-to-water distance, by a minimum of about 1 1/8". It doesn't seem like a lot ... but for young kids learning to swim (like my grandkids), it is significant when they are reaching up to the deck. It is also gives a different look to a pool which you may or may not like. You can't raise the waterline without changing your skimmers.

My personal opinion on yours...I think your coping and decking look pretty good, especially as compared to how mine looked before I remodeled. If you decide to change it and are going a DIY route, the time commitment is significant. Also, since you have already started your pool work with a contractor, this time of year is NOT the best time to DIY this large task. Using a similar method, to what I did, would require the work to be done NOW before the new waterline tile is installed, not later.

One possibility, you complete your remodel as planned (no decking changes), clean up your decking a bit (around the tile line), and completely replace the deck later when you can afford it. I looked at that porcelain tile you mentioned, that stuff is expensive. It might be cheaper to take out the existing deck entirely and replace with travertine. In that case, removing your old cantilevered decking will definitely still cause some waterline tile damage (if it is even possible), so buy EXTRA waterline tiles NOW so that you can replace broken ones later.
Last edited: May 1, 2022
A

Thank you for the detailed message, it helps tremendously. Unfortunately we are stuck in our pool remodel phase as we were scammed by a contractor who isnt licensed to do pools and subsequently had his license revoked (long story). Waiting for AZ ROC to help us with restitution. We won’t have a pool ready by summer so thats why we were thinking of taking our time to do this ourselves a couple hours a day. Our pool was built in 2007 so its getting up there, 15 yrs old. If we were to cut the coping ourselves, what type of saw did you use? One of those large concrete demo saws 12” rentals?

AdventurerNori said:
If we were to cut the coping ourselves, what type of saw did you use? One of those large concrete demo saws 12” rentals?
Click to expand...

That’s exactly what I used…gas powered with water cooling. Cutting that much coping will pretty much destroy the blade so you might have to replace the rental’s or buy your own to begin with. You need to cut the deck further back than your gunite, by just a bit, to ensure there is no overlap of the coping.

Between the gunite and cantilevered deck is probably some kind of membrane, I think mine was Teflon, so that the deck can ‘slide’ over the gunite as it contracts/expands. That is exactly the joint where the tiles cannot be placed over, otherwise your tiles will crack/pop off. I filled the joint with a siliconized caulk before tiling and then grouted it to ensure that if there was continued movement, the joint is where it would crack, and not the tiles.

I didn’t solicit any advice before I did that project, there might be other reasons why using this method is not such a good idea. Hopefully any other members might chime if there are other reasons (besides cracking at the grout joint between water tiles and new coping tiles) to NOT use this method.
A

Ok sounds good. We have a 1” overhang so cut off close to 1-1/8”? 1-1/4”? Also depth of cut and dangers of cutting into the shell a bit. Im no stranger to power tools but cutting off pool coping is on a list of skills I never thought I would need. Our perimeter is straight angles, no curves. How long did it take you to make all the cuts on the coping? Wondering how long I should reserve the tool for.

Thanks again for all your wisdom
J

A flush cut to -1/4” cut should be fine. If it is not enough in a few places, it can be ground down where needed. When I did it, I just “eyed” it but my pool was round. If you look at my thread I went back (after the cut) and spread some rapidset cement to make the vertical straight as a foundation for the new tile. On yours, you still have some “stuff” where the waterline tile was, some of that may need to come off for the new tile application (and/or to eye the depth of this deck cut) but you don’t want to use the tile saw for that…probably a grinder.

I don’t think you have to worry about small cuts into the top of the gunite too much. There is no water at that top edge.

It took me a whole day, but my pool was round and I did some additional stuff on some sidewalks and the waterfall. I also had no clue what I was doing at the beginning and had to go back and recut many spots as I learned.

Also, you probably want to check on tile availability before starting this process. We had it all planned out before we decided to go down this path. I don’t think standard pool tile will do the trick, we were lucky to find stuff at Home Depot that we liked AND met the requirements. You need both the waterline tile and something to go above it…and every piece above will have to be cut.

Personally, I think it might be too monotonous to carry standard pool tile up the cut cantilevered deck, that’s why we went with the different tile styles. Also, we mitigated that somewhat on the waterfall “walls” by taking the stone veneer “down” to the waterline tiles.
Last edited: May 1, 2022
You must log in or register to reply here.
Thread Status
Hello , This is an inactive thread. Any new postings here are unlikely to be seen or responded to by other members. You will get much more visibility by Starting A New Thread

E
Use waterline tile rather than "remodel" coping?

Everything Else May 22, 2022
Tim D
T
J
Grout Or flexible sealant between coping and tile?

Everything Else May 9, 2022
AQUA~HOLICS
A
M
Separation between coping and liner track