My SCG has been humming along forever, holding FC around 10, certainly in the 9-11.5 range. I check it pretty much every day (way too much I know) and with the SCG producing 3.0 ppm/day, so lots of data points. See my logs.
A few days ago I skipped a day and when I checked the morning after I was at 4.0 FC. When I last checked two days before FC was 10.0. Somehow, in two days, FC went down 6.0 ppm. That is unprecedented in my pool.
I brought FC up to 9.0 with liquid chlorine and it has held fine since. Looking for an explanation for that unexpected one time FC loss.
-Not likely a one time algae visit. Performed a OCLT just in case, zero FC loss overnight. Water is clear.
-Testing error? I re-did the test 3 times
-SCG coincidentally stopped working for those two days? Not very likely, no error messages, working fine now and I didn’t touch it.
All that brings me to the one thing I did different in those two days. I added 8 lbs of calcium chloride the day before the mystery FC 4.0 test result. Could the addition of calcium chloride cause a one time FC crash? 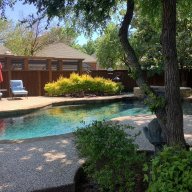 I also had a relatively quick drop in FC recently, but mine ended up being an algae bloom. I’ve kept FC in the 7-10 range all year, but watched it drop from 8 to 5 in a day or 2. OCLT revealed that I had a problem, so I did a SLAM that only took a couple of days to pass the SLAM success criteria. Maybe you caught the early stage of algae and your 9.0 dosage knocked it out?

We have seen others where FC dropped after adding calcium.. Not sure why but I have read at least 2 others have the same issue... It should not happen at all and really no reason for it... ???

I searched and also saw other posts documenting this phenomenon. I went back in my logs and noted a similar FC drop in the past although not as drastic, probably because it was lesser amounts of calcium chloride added. I think the correlation between calcium chloride addition and FC drop is clear enough (even if we haven’t figured out why) to merit a mention in the ABCs or somewhere.

I wonder what the ingredients label listed on the product you added? How pure was it? Perhaps the chlorine battled some contaminants?

8lbs of pure calcium chloride will increase the CH in your pool by 100ppm. It will also increase your salt level by 130ppm. If you added the CH increased all at once near the skimmer or into the skimmer, the high chloride load could cause your Aquarite to throw a high salt error and possibly shutdown. I’m not familiar enough with the operations of Hayward cells to say so but perhaps @JamesW might comment on a large chloride load affecting cell output.

Unless a mechanism can be proposed for calcium causing a direct loss of chlorine, PoolSchool will not be changed. Anecdotal evidence is not sufficient.
J

revitup said:
I added 8 lbs of calcium chloride the day before the mystery FC 4.0 test result.
Click to expand...

What exact brand and SKU?

Possibly contaminants in the mix that react with chlorine could reduce the FC.

Adding calcium chloride is really not too different from adding regular salt.

If the chloride addition goes through the cell in a concentrated enough solution to cause the amps to go above 8.0, it will shut off with a high salt warning for the remainder of the 180 minute cycle.

However, it should resume production on the next cycle.

This is the calcium chloride I use. I broadcast it in the shallow end, as far away from the skimmer possible. I sweep it back and forth until it’s dissolved. I suppose a concentration could get to the cell but I take pains to avoid that. Short of turning the pump off. I only do that for salt addition. Hope not turning the pump off for calcium chloride addition doesn’t harm the cell like it would for salt.

Hummm. I don't like when a product doesn't list its ingredients or show how pure it is.

If the anticaking agent yellow prussiate of soda is in the salt or calcium chloride, it might react with the chlorine like this.

The iron goes from the Fe2+ to the Fe3+ state as it is oxidized by the chlorine.

JamesW said:
If the anticaking agent yellow prussiate of soda is in the salt or calcium chloride, it might react with the chlorine like this.

The iron goes from the Fe2+ to the Fe3+ state as it is oxidized by the chlorine.
Click to expand...

Problem is, the math doesn't really work out in favor of that chemical reaction (although, it is a plausible reaction as YPS is a reducing agent). You need about 12.85ppm of YPS to neutralize 6ppm of FC. In an 8500 gallon pool, that would require an addition of about 0.91 lbs of YPS. The amount of CaCl2 added was 8lbs. I sincerely doubt the manufacturer made a mixture of 7.19 lbs of CaCl2 and 0.91 lbs of YPS. The resulting mixture would have looked very yellow in color as YPS has a intense yellow color.

Now, could there be a mechanism where the resulting ferricyanide is reduced back to ferrocyanide by the following redox reaction -

This could happen inside the SWG cell. In this case, a smaller amount of ferrocyanide would be needed and the constant redox reaction at the cell plate would look like an effective reduction in chlorine output. This would continue until all of the ferrocyanide is spent through the degradation of the iron-cyanide ligands which does happen when YPS is treated with a strong mineral acid. This would release toxic cyanide gas BUT, in the context of the concentrations found in a pool, I doubt the cyanide would have any impact on people as it would be microscopic quantities.

Also, sufficient amounts of YPS would also cause staining which we do see when people add salt to pools that has the YPS anti caking agent in it (Clorox Pool Salt was a bad actor for that problem).
Last edited: Sep 4, 2021
Reactions: JamesW

Have you noticed any lingering effect after adding the CH increaser or is your system back to normal?
J

JoyfulNoise said:
Now, could there be a mechanism where the resulting ferricyanide is reduced back to ferrocyanide by the following redox reaction
Click to expand...

And, then that gets oxidized by the chlorine in an endless cycle until the it breaks down?

Hard to tell what is going on with the FC loss without better data.

Maybe some other contaminants or maybe just test error or some other explanation.
Reactions: JoyfulNoise

Have you noticed any lingering effect after adding the CH increaser or is your system back to normal?
Click to expand...

Along with a couple of LC additions to get FC back up into my ‘comfort zone’ I’ve performed two OCLTs and passed both. FC is holding as it was before the mysterious FC crash indicating the SWG is holding FC as it was before. Same weather as before the ‘crash’, same bather load. All seems back to normal.
Reactions: cowboycasey
J

If you do another addition in the future, check the FC and CC immediately before and immediately after to see if there is any reaction.
Reactions: JoyfulNoise

Testing and Balancing Your Water May 28, 2021
3kidsAndAPool

S
Added calcium and now my numbers are off??