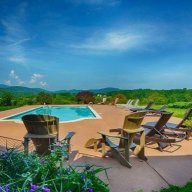 A neighbor who had been getting help from "the local pool store" was saying they were having problems with the pool chemistry. I took my Taylor FAS-DPD test kit over yesterday and measured what I could, but given the high free chlorine levels, or something else going on, would like to run the situation by the group here.

18,000 gallon vinyl pool, has been using a pool cover for heat retention, with a propane heater
Has had the SWG switched off for the past few days. Hayward TCELL925. His last SWG setting was at 36%, single speed pump running 24x7.

FC on FAS-DPD test was 58, that was a lot of drops!
CC none
pH color immediately started out around 7.6 then quickly drifted to bright pink 8+. I have never seen something like this. Can this be due to high FC?
Acid demand drops impact didn't even seem to keep it on the same color scale. Not sure what the pH really was.
For alkalinity test, it went from blue to yellow (not green to red) around 50.
CYA was not measurable, clear to the top of the tube, so less than 20, and presumably zero with no apparent history of adding it.
CH 90, if that hasn't been adversely impacted.
Clarity 10.
Salt 3930, but only reading 2800 on SWG. No history of cleaning T-cell, so will show him how to do that which will likely fix the discrepancy.
Temp 77.5 F

Clearly need to lower the FC level by keeping the cover off, but that is likely to take a while. No water features or spillovers to help. It was likely even higher since the SWG should have been off for several days now. I set the dial to minimum (5%) just in case the internal SWG panel switch has failed (SWG power is tied in to pool pump circuit). Other option is to drain and re-fill, but he doesn't plan to keep the pool open much longer. I advised against using the pool given the current questionable status of levels.

My guess as to what happened was that he ran the SWG all summer at way too high of a level so that resulted in a slowly and ever-increasing FC level. The "pool store" had suggested he set it at 60%. I found it at 36% with the pump on 24x7. (For reference, my max SWG setting for a similar volume plaster pool was 18% for stable levels running 24x7 during the peak of summer heat and pool use with a CYA of 70. Mine is now at the minimum setting of 5% and holding FC at 6.)

Any thoughts on how a very high FC will impact the other tests? Could the pH be way out of line and impacting the FC readings? Given the strange color results on pH and alkalinity, I'm hoping someone here might have seen something similar at some point, or an explanation of what is going on with chemistry resulting in the odd test color readings.

Thanks for the help!

High FC will cause pH to read high.

Leave it uncovered during the day to let the sun burn off FC.

Use Pool Math to calculate CYA to raise form 20 - 30 for now. Add that much. Repeat this with one day between additions until CYA is on the scale. At most, this will take 3 days to get CYA where you can read it.

With a cover I have no idea why he would run the pump 24/7. You only need to run it as long as it takes to keep the water clear and with a SWCG however long it takes to produce the amount of chlorine you need compared to your CYA.

tim5055 said:
With a cover I have no idea why he would run the pump 24/7. You only need to run it as long as it takes to keep the water clear and with a SWCG however long it takes to produce the amount of chlorine you need compared to your CYA.
Click to expand...

I discussed this with him, and it will be fixed next season with a timer or variable speed pump and proper SWG setting.
Reactions: tim5055
You must log in or register to reply here.
Share:
Facebook Reddit Pinterest Tumblr WhatsApp Email Link