I'm starting to plan my SWCG installation. I was originally going to hire a company to do it, but I haven't had any luck finding one interested. So, I feel like it would be better to just do it myself.

As part of the process I want to re-plumb the spa return, so that I can manually shut-off the spa spillover in pool mode, which can't be done as things are plumbed now.

I'll have a million questions over time as I plan this, but here are a few to start:

1. I've attached a photo of the existing installation. I'd like to remove the entire return pipe assembly and rebuild it from the heater outlet to the ground. As you can see in the photo, if I cut below the T-fittings that attach the spa check valve, there's only room on the return pipes for one more glued connection before getting to the ground. I'm thinking of gluing on a threaded connector, so that what I build could be disassembled later if something needs to be changed; but, I'm wondering about the durability of those connections. Any thoughts?

3. If a repair was needed on a pipe, and there was no piece available to glue on a union/coupling what solutions are there other than jack hammering the concrete out to expose more usable pipe length?

If it were me

I would cut that last piece of pipe off and glue a union on both sides... on the other side of union go up, like 3 feet up and start from there with everything new... If it ever needed to be done again you can unscrew the union and screw a new union on and your back in business...

The pipes in concrete is holding you back, normally you would just go down and start new...

The top red marks you could cut there and connect on a new piece.... 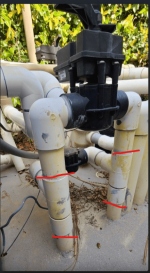 Reactions: HermanTX and nobody291
N

That makes sense, thanks for the reply. Would a union be better than a slip to pipe thread adapter like this one?:

Unions are great in that you can unscrew them and then either unscrew the rest or replace after that Union point.

While the threaded connections work great, If you have 2 of them, one tightens while you loosen the other. So you need a Union between them to open to be able to unscrew both pieces separately. This can be done as new, but usually the retrofit spacing won’t allow it.

If all else fails and you are stuck with no room to splice new fittings on a piece of pipe, they make inside fittings to glue the 2 insides together. So they would effectively be ‘slip in’ couplers instead of ‘slip on’.

*hands back off to Casey and his great guidance*.
Reactions: nobody291 and cowboycasey
N

The main thing I'm concerned about is the long-term durability of the threads permanently attached to the pipes coming out of the ground. Between a union and that PVC slip-to-pipe thread adapter, would there be any difference in the quality of the threads? I presume a female adapter would be better since the threads would be protected inside the adapter. Would a schedule 80 adapter like this one have even higher quality threads?:

I wish I could answer that, I have no idea as I have never used threaded anything on PVC unless it is a union... Until 8 years ago I had never done PVC anything

My unions are 8 years old and in perfect working order still, every year I disconnect them, blow out the lines to winterize.. Then in the spring lube the O rings and put them back together with 0 issues....
Reactions: nobody291
P

nobody291 said:
The main thing I'm concerned about is the long-term durability of the threads permanently attached to the pipes coming out of the ground. Between a union and that PVC slip-to-pipe thread adapter, would there be any difference in the quality of the threads? I presume a female adapter would be better since the threads would be protected inside the adapter.
Click to expand...

I suggest you need to understand the difference of threaded vs. union designs. The schedule 80 or 40 are just standard pipe tapered threads cut into plastic. The taper creates the seal as you mate the 2 parts together. Think about your sprinkler system which uses 1/2" threads and plastic pipe. Also, threads are really made to screw together and remain together. If you unscrew and re-screw they start to wear which is why they make teflon seal tape to help seal after multiple re-assemblies.
A union is completely different. The union uses coarse threads that are sturdy and easy to thread together. Here the threads main function is to provide rigidity and strength to the connection. The seal is provided by an oring inside the union half with the external threads. When the 2 sections are joined together, a seal is formed and the threaded ring is hand tightened to the other end to hold the union together. You should never put teflon tape on a union thread simply because that thread is not to seal but to provide mechanical integrity to the union.
In PVC plumbing I would always try to use a union connection over a threaded piece unless it is something like threading a piece into a filter body or into a pump body where a threaded connection is the best solution for long term.
Reactions: nobody291, mguzzy, cowboycasey and 2 others
N

Thanks for all the good replies! I did not understand those differences that HermanTX went over, thanks for taking the time to write that.

Thank you Herm.. I was trying to figure out how to say what you just said.

I have only every used threaded fittings when I am going from one pipe material to another. Like screwing into a pump housing or transitioning from PVC to galvanized. OR if I need something to move like a swing arm assembly. Otherwise I glue PVC to PVC because its more bomb proof. If its something I need to disassemble for maintenance I use unions Like the way a a SWG is plumbed inline. I don't see what would be gained by using threaded fittings. If they aren't going to be accessed for 10years.. they may be just as welded together as if they were glued. Besides if you have two threaded fittings where the pipes come up from the pad, you would have to cut everything out to get them to spin anyway. I don't see what is to be gained.

Also if you do need to cut pipe they have these nifty gizmos that will ream out a slip side of the fitting so it can be reused. Somebody help me with a link.. what are they called?
Reactions: nobody291 and HermanTX

Also if you do need to cut pipe they have these nifty gizmos that will ream out a slip side of the fitting so it can be reused.
Click to expand...

Would this tool allow me to reuse the 2 valve housings that are glued into the existing installation? I've been trying to figure out what to do about those too.

Yes.. or you can use a slip of the next size up. They are usually made to take two sizes.. ie 2" inside, 2.5" outside
Reactions: cowboycasey
You must log in or register to reply here.
Thread Status
Hello , This is an inactive thread. Any new postings here are unlikely to be seen or responded to by other members. You will get much more visibility by Starting A New Thread