Jump to latest Follow Reply
You are using an out of date browser. It may not display this or other websites correctly.
You should upgrade or use an alternative browser.
U

I wanted to create this post to help others out that might have the same problem that I experienced. I get a lot of help from this forum and want to give back. I have a Circupool SI-45 salt system with the T-15 cell. I understand it is the same as the Hayward Aquarite series. I started getting a HOT error code on the screen of my unit. I could power cycle it and it would run for a few minutes and then give the same error code again. I did some reading and decided to go ahead and clean the cell since I hadn’t done it in a while. After cleaning the cell the error code went away. I thought I had fixed it… then I get the low salt error code and lights coming on. Ughhh!

Flipping through the different menu readouts I noticed that the salt was reading around 1800 (even though I knew it was over 3000) but what was really weird was that the temp was reading around 120 degrees. The real water temp was only in the low 80’s. Apparently the board uses some sort of algorithm having to do with the current in the cell in relation to the water temp to determine how much salt is in the water. So because the thermistor in the cell had failed (and saying the water was 120 degrees) it was telling me that the salt was low and wouldn’t generate any chlorine.

Holding the plug vertically with the cord going down and looking at the connection points. The two ‘X’s in the diagram below are the two pins to the thermistor to measure the resistance between.

You can verify your resistance reading with this chart to see if it matches up to the corresponding temperature. It’s a standard 10K thermistor so 77 degrees should read out as 10K Ohms.:

I had another 10K thermistor set up for a solar controller I no longer use. I pulled the cord out of the wiring compartment on the SWG cell and clipped the red and blue wires. I spliced the thermistor into the two wires going back up to the controller and turned it back on. I’m now back in business! The water temp now reads 84 and the salt is reading 3200 and it’s generating.

I ordered another generic 10K thermistor from Amazon. You drill a 3/8” hole in one of your pipes and use a hose clamp to hold it onto the pipe. I wired the thermistor up to the leads in the cell and then just used some silicone to seal up the hole.

Here’s the one I used but there are a bunch of different ones that all look the same: Amazon.com: AR-PRO 520272 Air/Water/Solar Temperature Sensor with 20-Feet Cable Replacement Pool/Spa - (1-Pack): Garden & Outdoor

I also could’ve made the connection with the new thermistor at the control board end of the connection as well - either via soldering the thermistor wires to the board or modifying the plug. I decided to keep it contained in the cell so that when I eventually replace the cell I don’t have to mess with undoing my modification. 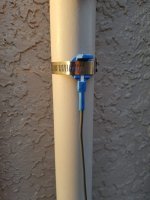 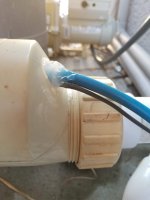 Thank you for the write up. Can I assume the Hayward GLX-PCB-RITE bd is interchangeable with the Circupool SI-xx? You did well in troubleshooting the T-cell in-house thermistor. You will find the T-cell connector pinout here > Hayward Aquarite SWG - Further Reading
Last winter, the shortages in liquid chlorine had me hacked the temp reading on my AQR bd. As you can see in the below pic, I cut the circuit trace going to pin# 6 of the J5 conn on the bd. I soldered a 3 way pin header in place. Moving the jumper to the right will utilize the T-cell in-house thermistor. Moving the jumper to the left will trick the controller to read 65°F via the 13.3k Ω resistor against the negative post on the bd. A 10k Ω res will lock the temp at 77°F but as observed, the lower the temp seems to give me higher salinity reading. Hence, the 13.3k Ω resistor at 65°F, high enough to get pass the 20% capped threshold. This allows me to chlorinate even at low 50's during cold months. A 20k Ω bias pot is ideal but I gotta use what I have. Btw, the pic below is a GLX-PCB-RITE r1.55 upgraded to r1.59 (no more Thermistor burning issues). But to each their own! 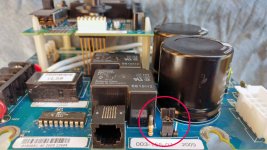 I don't have the cover off anymore but the board does look the same. In your scenario a pot that you can adjust to whatever temp you want it to show would work well for your winter months. I considered just jumpering a resistor in line instead of putting in the external thermistor but I wanted it to read the accurate temp since the temp affects the salt reading. I think the higher temp gives you a lower salinity reading. When my unit was reading 120 degrees it was saying the salt was too low.
You must log in or register to reply here.
Thread Status
Hello , This is an inactive thread. Any new postings here are unlikely to be seen or responded to by other members. You will get much more visibility by Starting A New Thread