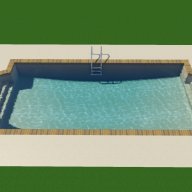 For those of you with sports pools, did you find yourself needing to choose between a center-placed ladder and volleyball anchors? Our builder asked me if I still wanted the ladder or if I wanted to add the volleyball anchors. Can I not do both? We need the ladder in the center because we have small children and although it is only 5 1/2 ft deep, I still find it to be a safety measure. If any of you done both, do you have pics?
N

When my kids were small, the ladder got used more than the steps. They'd jump in off the diving board and go 10 ft to the ladder because it was there. They also realized quickly that in a 20 ft wide pool, they were never further than 10ft from the side, and would just go to the nearest side if the ladder wasnt closer. Then they'd 'walk' themselves down the side to either the ladder or the shallow end. This was only after they had been swimming for a while and had tired some but still wanted to keep swimming. In about a year for the bigger kid, and 2 years for the little one, it no longer mattered. A combination of being older/stronger and better swimming ability, and they could just swim corner to corner all day. The ladder made it easier for them at times but it wasnt particularly needed. Think about it, you'll have the ladder on one side. Half the time in the deep middle, the other side will be closer. They will go for that side and pull themselves back to the shallow end. By 6 years old they could climb out on their own at any side. They could climb out at the corners about 5 years old. Once in a while we have friends over with little kids (and with plenty of adults around) we just pull the kids out from the side if the ladder is too far away for them. Your kids will have pleny of supervision too, even if its just you and wont ever have to fend for themselves (alone) with the ladder. It definitely helps, but its not nearly as critical as you think.

My two cents would be to center the volleyball anchors and put the ladder right next to it on one side. Swimming 18 more inches wont ever matter. On the other side its18 inches closer
N

P.s. they make swimmies that are closer to life vests now and not the poppable blow up stuff. They have much less restriction of movement than the life vest has. We had already bought life vests when these came out but a friend showed up with it one time and it was awesome. We would have bought several just to have when the kids and friends kids were all little.

If you do decide to get the ladder, (I wouldn’t in a sports pool) have them install the anchors for the volleyball, and pick a ladder that can be removed with no bolts sticking up from the concrete decking.

Chastiti
Concur with Arizonarob. We have a sports pool and play volleyball from time to time. I can't imagine the danger that a stationary ladder might inject into the equation.
With a typical sports pool, you can almost walk from one end to the other and then just use the steps at one end to exit the pool. Ladders are typically useful when one has a diving pool or a pool with a slide, so after the dive or slide, you can just swim over to the ladder in the deep end and quickly "have a go at your swan dive" (or belly flop as the case may be) again.

And as far as the little one's go, if they are not "half fish" yet, they should be wearing an approved kiddie flotation device to prevent any possible accident!!!
All-the-best....
r..
Last edited: Jul 28, 2019
You must log in or register to reply here.
Share:
Facebook Reddit Pinterest Tumblr WhatsApp Email Link

A
Ladder for Sloped Pool Walls