Some animal poops on my top step.

Sorry about posting here: I do not see the general discussion forum.

Started a week ago, Found two small poops at the opposite ends of the top step.
Has happened 3 times since, last time today. I find it in the morning.

Having browsed the Net I read it could be a raccoon but then when they show what raccoon poop looks like, it does not seem to be it.

I am in Jackson NJ, has anyone locally have the same problem and how do you remedy it?
I wish I photographed the problem before cleaning it.

We've got a bunch of toads on our back porch eating buggos all night. The wife saw one swallow a cicada whole. They leave poops that look a lot like squirrel poop. Maybe it's evidence you've got an all natural exterminator service? Ours are generally active at night and never see them in the daylight.

I setup some outdoor Blink cameras to learn what wildlife were roaming around my pool at night.

We hired a pest control company to put out a humane trap to catch the raccoon or ground hog and relocate him far away.

I found a similar one on my patio this morning, 1" long and about 3/8" diameter, and it appears it is from a toad/frog. I went back and watched on my security camera and sure enough, it hopped over, spent a few minutes 'growing' something, and hopped off.

Methinks I found the culprit.

Yesterday, when I ordered the scary lights and the camera, and bought the Rodent Sheriff spray, having spent about $100, late in the night I went to apply the spray.
When I got to the steps, I noticed a large frog sitting right near. I usually had small froglings, I saved them when I could, but this one was huge. The kind they eat in France.
I gently tried to push it away, but it just sat there. Then I started spraying and the frog jumped in. Good luck catching a frog in a large deep pool. Beautiful swimmers too, fast, powerful!
So I waited and it eventually surfaced up and then proceeded right to the skimmer at which point I got it and tossed it out. It seemed to go away at the time, or so I thought.
I sprayed away, and went back.

Later I decided to look for any signs of intruders and....the frog was sitting right where the poop usually appeared, at the corner of the top step. I put two and two together, and went to look on the web for frog poop pics. Sure enough....exactly what I had..
So my son and I waited with a toy bucket and a tray for it to surface.....took 3 attempts. But I caught it. Then we quickly jumped in my car and drove it to the pond (this is where they come from, we have a pond in the development, across the woods from us).

When I opened the bucket and wanted to toss it in, it jumped, and the jolt was like from shooting a large powerful air gun, I almost dropped the bucket.

And the frog is better off there in the pond than in the chlorinated water with CYA. And I am sure, it feels better pooping in the pond.
Reactions: MarieB and TexEdmond

That'd be a ... Rodent Of Unusual Size for sure...
Reactions: CaptainCannonball

well only in Louisiana... in the... SWAMP of SADNESS (wait wrong movie)

TexEdmond said:
well only in Louisiana... in the... SWAMP of SADNESS (wait wrong movie)

Is this the nutria? Or I think you coll it "Coipu"? I ate it once, very tasty.

I only ever heard Nutria. I guess a beaver is also a ROUS now that I think about it...

morzh said:
I ate it once, very tasty.
Click to expand...

No, coipu. Back in the old country they bred them for fur, but it was also good meat. Our neighbor once treated us to a stew. We would not know but then he had that devious look on his face and my mom got suspicious. When she asked what he fed us, he fessed up to nutria. My mom did not handle it well. I though did. For me it was as good as rabbit. Stew is stew.

I chased it out. Thought that would be it. I mean, I never had big bullfrogs in the pool. I had turtles. Snakes. Froglings. Sometimes I saved them. But not full-grown bullfrogs.
Ribbit.
One week after we got rid of that French restaurant menu item, Sunday, to be exact, I looked out the back door and saw the frog mug with the eyes over the water level, at the stairs again.
Well, the guy took the liking, methought. I broke out the bucket and the tray and promptly made sure the croaker ended up over the fence in the woods on its way to the pond.

Yesterday, Tuesday it was, I went to check the chlorine before it got too dark.
While checking it, I saw a little dead garden snaky at the bottom, tossed it out, said "ashes to ashes" and decided to check the skimmer, just in case. There was no reason, no recent rain or anything of the sort that results in critters washed in the pool and sucked into skimmers.
I opened the lid.....and I saw the flipper. Whoever that flipper was attached to was obviously alive as it was keeping at the surface.
Well, methought, pulling the basket usually is a sure way to catch the trespasser.
I put my hand to pull out the basket and the frog made a serious dash to escape and got in the pool through the skimmer trap door.
Wow!

I could see it graciously swimming along the bottom, with one of it's sizeable middle fingers on a flipper extended towards me. That made me angry.

I went to fetch the bucket and the tray.
My kids came out, my daughter of 10 and my son of 17.
The froggie started surfacing for air and quickly got trapped in the bucket. Then I put the tray under, pressed the bucket firmly against the tray and started rising from my knees. When I was fully risen, my hands pressing the bucket and the tray played a trick on my balance, and I fell. On the concrete. My head barely missed a brick step going down to the pool. I guess my jiu-jitsu training paid; I broke the fall with my forearm.
My daughter screamed; my son grinned. Then he helped me up.
The frog was back in the pool.
I was hurt.
My wife came out and asked about the commotion, and my son said "The frog kicked dad's Rear".

I went inside and tended to my wounds. Bleeding ankle, and abrasions above my butt, on my elbow and a bit of a jammed wrist.
Then I came back.

The frog realized I was fuming and immediately dove. After a few minutes it realized it had no snorkel and decided to surface up. I went after it. The frog saw me and went across the pool.
I followed.
It tried to surface under the climbing ladder where I could not use the bucket, but I pushed it back with the tray.
Eventually it had to give up and surfaced right where I was waiting. There it was caught.
Then the same thing followed: my son and I jumped in my Jeep and brought it to the pond.

Have you considered that's the universe suggesting that's exactly where that frog belongs? They do eat bugs, which do not belong in my yard ... 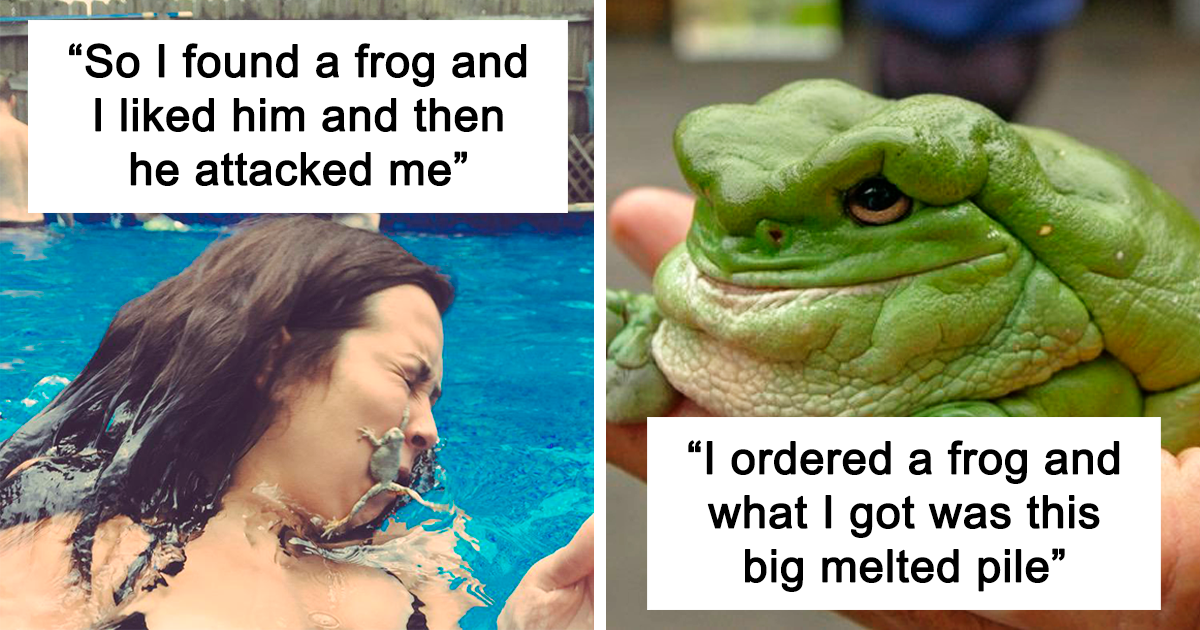 50 Adorable And Funny Frog Pics To Make Your Day Better

The internet is in love with frogs and toads and we wanted to show you why. They’re goofy, they’re cute, they’re incredibly polite, and they’ll hopefully make your day brighter.

Water Under Top Step. What is the best way to fix and prevent?