No. If your reagent is old, it’s going to be less effective, not more. Having said that, if you have been using it for two years, probably should order a fresh one.

During SLAM, you should be testing FC multiple times daily. I would shoot for at least 4 times, so you can get your FC back up to SLAM level.

After SLAM, you can definitely keep your FC higher rather than lower. Shoot for a couple of points higher than target level. That’s not minimum, by the way.

And test a few times a week, if not daily, until you have a firm handle on your pool. Most of us get to the point where we can guess what our FC is, even before testing, and come pretty darn close.
C

kellyfair said:
No. If your reagent is old, it’s going to be less effective, not more. Having said that, if you have been using it for two years, probably should order a fresh one.
Click to expand...

I guess that depends on what "effective" means. If it means effective at neutralizing the DPD powder to clear, then more drops would be required and the FC calculation would be skewed high.

I found a few TFP threads on the subject and it's all over the place.

Ah. I was thinking you meant the powder. I see what you mean.

But, did you buy both at same time?
C

Well I dosed the pool again and only overshot by 2 ppm this time. Maybe that's as close as you can expect to get. I'm not going to lose sleep over it.
Reactions: Newdude

If the drops are old then yes, it could report high. I would plan on replacing reagents every two years or so in general.
C

OK I've concluded that I have not been testing FC accurately due to my technique. My OCLT results were 1.5 ppm higher in the morning than the night before which can only be a procedural error. Stale reagents won't fail in that way and I always allowed 30 minutes to mix. After brushing up on a few threads here I believe the procedural error was in squeezing the bottle too much. Also I do not wipe down the tip. It became apparent that impatiently machine-gunning in those 40 drops produced smaller droplets than when you let them slowly drop.

So the bad news is that I may have actually been undershooting instead of overshooting the mustard level. The good news is the water clarity is very very good today.

Well, now you know! Wiping the tip between isn't as important for the FC test as it doesn't have the same issue as the R-0009 reagent has with static electricity, but you definitely want to let the drops fall naturally off the bottle with only enough gentle pressure to coax them out, and not squeeze hard. Now you have a better idea of the FC level and can bring it up to the appropriate level!
N

C3Cl3N3O3 said:
I believe the procedural error was in squeezing the bottle too much
Click to expand...

Gentle squeeze and let itself drop at perfect, repeatable, droplets.

Not needed for FC. It’s needed for TA on new kits but after 10 or so tests the static charge is gone and it’s no longer needed.

C3Cl3N3O3 said:
So the bad news is that I may have actually been undershooting instead of overshooting the mustard level
Click to expand...

That’s bad news for your efforts. But it’s GREAT news for your finish/liner and equipment which may have been damaged by going nuclear hot. So there is that.

Great job finding your errors and correcting them.
C

Looking great! There really was no debris to speak of brushing today. The water is nice and clear and blue.

For posterity, I also was not pointing the dropper straight down. I was machine-gunning in the drops from an angle. 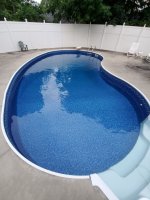 Now that is TFP water. Very nice. Now keep that target FC up a little like others have suggested and you should be good. I'd also test the FC at least every 3 days until you get a feel for just how much your pool is using consistently. Once a week is reserved for people that have SWGs and even that is pushing it.

Algae - Prevention and Treatment Thursday at 4:38 AM
mooseau

J
FC dropping like it's hot (in my spa)