Sink deck posts in concrete or up on blocks?

We have a new 21' round x 4' AGP and are about to start constructing a deck around it -- like, tomorrow hopefully. Technically, we have most of the deck (large deck attached to house), the pool is installed next to it, but there's a 20 inch gap between existing deck and pool that needs to be filled in. We also have planned for a walkway all the way around. I read somewhere that digging next to an installed pool is a terrible idea because disturbing the ground after installation can cause stability issues with the pool. Is that true? Father-in-law (who is a carpenter) and various well-meaning friends/neighbors are adamant that the 4x4 posts should be sunk in concrete footings rather than up on blocks. Also, this pool is on a slope (18" difference between the deck side & the other end) if that makes a difference. 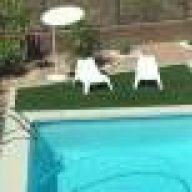 A picture might help. Sinking wood into concrete is usually not the best approach due to potential rot.
S

I don't know about pool stability issues, but we're putting our deck addition on blocks and not attaching it to the existing deck so we don't have to pull permits (freestanding vs attached to the house - your city may have different requirements). We also have some drainage and frost heave issues with the existing deck and don't want to risk having the old deck push the new one in to the side of the pool or knock it crooked if we tie in to it (hoping the drainage and patio work we're doing next month will solve that, but better safe than sorry, and yay for no permits!).
N

Like anything else, the hard way is the best way. Footer tubes filled with cement sunk below the frost line with a steel bracket attaching the posts is a permanent never gonna think about it again kind of thing. The lay them on the ground blocks serve the same purpose at none of the labor or cost. But they also don’t have the lifelong strength. The ground could shift in a bad winter or spring 2 years from now and you’ll be digging footers anyway.

rocker93 said:
Father-in-law (who is a carpenter) and various well-meaning friends/neighbors are adamant that the 4x4 posts should be sunk in concrete footings rather than up on blocks.
Click to expand...

L
Building a salt water pool out of block or container OR ?????