I have an American Pool Products Ultra-Flow pump with a 2 HP motor. The pump is the original unit from 1993, but the motor has been replaced. The first one died in 2008. I went outside yesterday morning and noticed the pump was not running. The breaker had tripped, I reset it, turned the pump on, and the motor started smoking. I assume that I pretty much have 3 options (I may be missing something): replace the single speed motor with a variable speed, replace the entire pump/motor assembly, or buy a new single speed motor. I don't know what would be best. I currently have a CV460 Cartridge filter with a Zodiac Nature2 Fusion Soft salt water generator. I typically run the filter from 8-6 each day. The pool is approximately 30,000 gallons. I'm in New Jersey, so it's open for about 5 months or so. Cost is not a major consideration. I would rather spend more to get a good product than buy a low quality replacement. I appreciate any tips, suggestions, etc. I'm hoping I can get this done before I get significant algae!

These are my notes for each option:

1. Replace the single speed motor with a variable speed version. I saw a unit on INYO that looks like it may work, but I don't know if it's actually a good product: V-Green 2.7 HP Round Flange 56J Variable Speed Motor.

2. Replace the entire pump/motor assembly. The pump assembly is actually in good shape despite the age. Although I'm not opposed to replacing it. I do not know what would be best. I'm not familiar with the different brands/products.

3. Replace the single speed motor. If I did this, I would probably just get an equivalent replacement from INYO or one of other online retailers.
Last edited: May 30, 2021 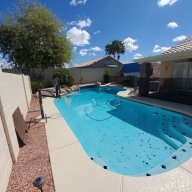 VS pumps are much cheaper to run, I'd recommend you go that route.
N

Chris
I had a similar situation with my previous Hayward Super Pump, where the motor died but obviously the housing is fine.
I replaced the motor with a VS Green from inyopools, and it works like a charm, and their customer service is excellent.
The motor will cost half of what a new pump does.

EDIT - go with option 1 and that motor. You can program it to run at different rpms for different hours of the day, and it is very easy to install following inyo's video.
Last edited: Jun 28, 2021
You must log in or register to reply here.
Thread Status
Hello , There was no answer in this thread for more than 60 days.
It can take a long time to get an up-to-date response or contact with relevant users.