Should I switch from liquid Chlorine to Tablets...Seems more economical

Hi I have been taking care of my pool now for ~2 months. After doing the SLAM process since my pool guy screwed up things have been well. I use 1 gallon of 10% chlorine every 4 days. so I use ~8 bottles per month and at $4 a pop its about $32 per month on chlorine.

I know the tablets add stabilizer, right now my CYA is at 70. if I do a half drain of my pool (maybe it will cost ~$100-150 in water) to refill it. The tablets cost ~$70 for 35lbs at my lowes. I think one tablet lasts ~1 week in my pool so this will last me for 1 yr. This would mean i spend only $70/yr on chlorine tablets vs. $360 on liquid chlorine. Its much easier and I can drain the pool once the CYA builds up again.

Any problems in my reasoning? Also how much does one 3" tablet increase CYA by? Thanks for the help.
Reactions: Saychao

Each tablet would supply 2.6 ppm FC and add 1.6 CYA to your pool. Based on your liquid chlorine use you need about 8 ppm of FC (that is low) per week in your pool. So you would need about 3 1/2 tablets per week. That would add about 6 ppm CYA per week.

Based on your statement, you would need to drain half your pool about every 6 weeks.

There are the numbers.

use the pool calculator:

When doing manual applications of liquid bleach, it's better to dose daily, not every four days, if that's what you're doing.

You'll soon tire of draining water just as you've tired of adding bleach. And if they slap water restrictions on again, then what?

In the winter, FC loss drops to next-to-nothing. What you add daily will likely be more like what you'll need weekly from December through April or so. So that will affect your cost calculations.

Second, as the CYA rises, the minimum FC you need to maintain also rises. How will you raise that? More pucks, which will raise CYA even more? That's going to affect the calculations, too.

So let's see... a gallon every 4 days means a quart a day means 1.75 gallons per week. If 12.5% that adds 10 FC to your pool. That's pretty low consumption, actually. To add 10 FC via pucks would take 31 ounces of trichlor. Assuming you could precisely control the rate it dissolves, that would also add 6.1 CYA per week.

You start at 70 CYA. After one week you're at 76. After two, 82 CYA. That will show up on a test as 80. So to get the CYA back down, you need to replace 1/8 of the pool water every two weeks. Or raise the FC level by adding more pucks, which raises the CYA even faster.

Do you really want to have to rebalance everything every two weeks?

It's all a long way of saying, "no" to your subject line.
S

1 gallon of 10% every 4 days? That's pretty nice, I use about a half-gallon per day for a pool roughly the size of yours (it gets full sun almost all day until late afternoon).

I get my Great Value bleach at Walmart for $2.94/121oz jug. The best thing about my store is that it always seems to have fresh date codes, usually about 2 weeks old. Nice! 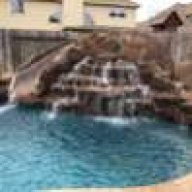 I started off the same way you are thinking of switching now.

My pool guy gave me a bucket of pucks when the pool was built...used those in my in-line chlorinator and thought it was the coolest thing ever.....until the summer hit.

Chlorine burns off way too fast and the stabilizer goes through the roof.

You're better off just maintaining with Liquid Chlorine daily and only using a puck or two when you need to add stabilizer. Draining/filling seems like it would be a headache.
P

Don't forget about the costs of other chemicals (MA, Borax, etc) that might be needed to balance the water after a major drain.
You must log in or register to reply here.
Thread Status
Hello , This is an inactive thread. Any new postings here are unlikely to be seen or responded to by other members. You will get much more visibility by Starting A New Thread

Testing and Balancing Your Water May 5, 2022
proavia

Testing and Balancing Your Water Saturday at 6:16 PM
mknauss

Testing and Balancing Your Water May 28, 2021
mknauss

S
Wanting to use tablets, but afraid CYA will get too high

Testing and Balancing Your Water Saturday at 1:01 PM
red-beard