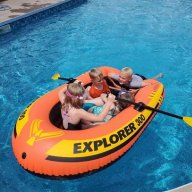 There are numerous posts on here about frequent failures for the Hayward Colorlogic 4.0 color-changing LED lights. My pool's Colorlogic light lasted around 7 years of very light usage before finally failing which seems pretty good! However, the pricetag for a direct Hayward replacement was ~$900. I decided to try the Florida Sunseeker "Pooltone Standard 16 Color LED Pool Light" which currently runs between $500-$600. I was curious to see if pool lights were one of those situations where "you get what you pay for" or whether Hayward was ridiculously overpriced. I was also unable to find any reviews, so I am posting this to help others that may find themselves in the similar situation of replacing a Colorlogic 4.0.

First off, the FL Sunseeker website promises fast shipping and they definitely shipped same day via 2-day FedEx from FL to NY. This was far faster than I expected. Off to a good start! The light arrived in good shape and was well-packaged.

When comparing the Sunseeker Pooltone to the Colorlogic unit, I noticed a few immediate differences:
I ran into several unexpected problems during the install that were all able to be overcome or ignored. Here they are:

1) The Pooltone enclosure appears to be made of a coated/plated ferrous material (i.e. iron or steel) rather than a quality stainless steel. If you set this directly on your concrete, you can expect to scratch it. I noticed a few scratches that had immediately began to rust when exposed to salt pool water. It's a little troubling to have rust already forming on a housing that will be submerged in a salt water pool. I wonder how long before a hole rusts all the way through it? I chose to ignore this for now. 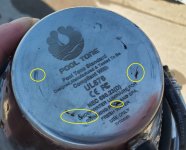 2) A clamp holds together the 2 parts of the light housing (bezel with backshell). The clamp screw protruded out to the very edge of the fixture and caused some rubbing on the niche during install. This made it hard to get it properly aligned into the niche on install. Consequently, I cut off most of the screw to help with clearance. This step may not have been 100% necessary as I was also struggling with the power cable slack & the next issue below. It is possible I just got confused. 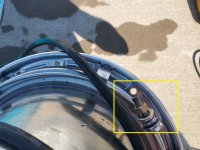 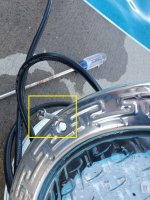 Once the issues above were dealt with, the Pooltone sat nicely in the niche and worked properly. The Pooltone LED light is just as bright and dynamic as the Colorlogic 4.0: 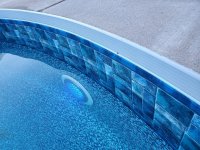 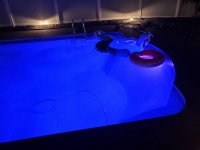 Overall, I am happy with the Sunseeker Pooltone product. At this point, I don't regret the purchase and feel that it was a decent budget option. I'm not sure why I ran into issues with mounting the Pooltone into the niche. I suppose it is possible my niche is not compatible with the Pooltone light. I was unable to find the part# for my niche. My logic is that if the Pooltone can replace the Colorlogic in a variety of niches, then it should be able to replace the Colorlogic in my niche. Who knows!

Let me know if you have any questions, and I'd be happy to try and answer.
Reactions: Katelyn

Thank you for the review.
You must log in or register to reply here.
Thread Status
Hello , This is an inactive thread. Any new postings here are unlikely to be seen or responded to by other members. You will get much more visibility by Starting A New Thread