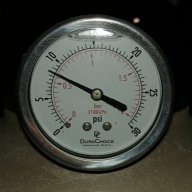 So my pump motor just died. Over the past several weeks, it started running much louder with a rattling sound and intermittent drops in rpm's and progressively got worse. This weekend I could hear grinding sounds so I figured the end was near. Sounded more like a diesel engine than the once quiet motor. I was going to post a video of the sound but there's no point now that it's dead.

We had installed the now dead Century VGreen 165 back in January 2017 to replace a 1.5hp single speed that was paired with the Pentair Pinnacle pump. Best I can tell, the previous single speed motors lasted about 6 years on average for me and the prior owner, so I was a bit disappointed that the VGreen 165 didn't last as long, only 4 years and 9 months. And I had an issue with the control panel after 4 years which lead to me running it as a single speed for the last 7 months. However, I am still interested in a variable speed motor as I did notice some nice monthly electric savings when I was able to run it at low speeds.

Would you all recommend another VGreen or is there a different brand worth considering? Looks like a new VGreen will run my about $450-500 plus seals.

Related question is whether or not I should replace my pump at the same time. The Pinnacle pump was installed in 2005 by the original owner. When installing the VGreen as the 3rd motor for this pump back in 2017, I thought we would replace the entire pump during the next motor swap out as the pump was already 12 years old at that time. However, a couple years later in May 2019, the pump developed a pinhole leak near the lid so we replaced just the front end housing as the rest seemed fine. And it was $140 for the part plus seals. Any thoughts on whether or not it's time to move on from this pump? If so, which replacements are worth considering?

Also, a related install question, is there a special motor shaft seal needed for saltwater pools that I should be using? The ones that come with go-kits for my pump seem like regular ones.
1

A good, comparable, replacement for your Pinnacle would be a Pentair SuperFlow VSP or Sta-Rite Super Max VSP (same pump, different color). It is probably time to replace your 16-year-old pump, they haven't been made for quite a while. There are seals made for salt water. You have to ask for them specifically.
Reactions: thefisch

Thanks for the info. When shopping online for the Superflow or Super Max, I don't see any option to request salt water seals. Is that possible to request when buying a pump with motor?

Yeah, I figured it might be time to replace the Pinnacle. If I hadn't replaced the housing a couple of years ago, then I would be doing it for sure. However, while they stopped making the pump over 10 years ago, it appears that spare parts are still available for the Pinnacle. Hence the question of whether or not it is worth replacing.

I visited the local pool supply store yesterday evening and they recommend replacing the entire pump whenever the motor goes. Even the manager was saying this. That seems like overkill to me but good for their sales and an easier install. Seems like you should be able to get more than 10 years from a pump which means two motors or maybe three depending on timing and condition.
You must log in or register to reply here.
Thread Status
Hello , This is an inactive thread. Any new postings here are unlikely to be seen or responded to by other members. You will get much more visibility by Starting A New Thread

plumbing advice and install tips for new VS pump - worth upgrading pump from 1.5hp to 2.7hp?