Ready to replace all my equipment - Need suggestions

Hi everyone,
I’m looking for some advice on pool equipment. Just about all of my components are failing or at least in bad shape. I’d like to just do a complete update and start fresh. My main question is what’s the best brand for what I need? I’ve spoken to several pool companies but they all seem to suggest one of the three main brands. Nobody has been able to compare one to another. I also want to incorporate automation, not for chemicals, just to control the pumps, heater, and lights remotely and be able to change modes for spa, swimming, etc. I also think I would like to stick with one brand so everything plays together well. The exception might be to leave the existing 2 hp pump for the spa in place since I rarely use it and there may be no reason to replace it. I appreciate any guidance on preferred brands and why. I think the most important components to me will be the salt system and the automation control/user interface. Who provides the best and most reliable for each. For reference, my existing equipment is listed in my signature line.

Its sort of like Cars. Jandy is nice, but expensive and a lot of people feel it's worth it. Pentair is genrally viewed as the leader in VS pump technology and think they are excellent all around. I happen to be one of those. Hayward has proved to be good for many, many people for a long time. Generally, Rheem/Raypak heaters get the best reviews, but Pentair seems pretty good there too. Most members here have favorites for differing reasons, so it really isn't cut and dried.

Just wanted to add my welcome to TFP... A Great resource for all your pool questions...

I am a rabid Pentair kind of guy.. I like to say the other brands are almost as good...

As far as DE vs. Cartridge, that decision might be made for you depending on the city you live in. In my case I have a cartridge filter mainly because of the local requirement that any DE filter must be connected to the sanitary drain (Sewer). The location of the pool made this a major effort and would have been too costly, so I was forced to go with the cartridge. That said, I have not found any real downsides to having a cartridge filter.

Thanks for the good advice. Any feedback on the automation systems from the big three? Any real difference between them. Capabilities, functionality, ease of use, application, etc? 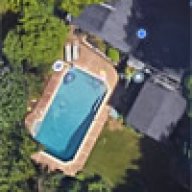 I have the Pentair SunTouch controller. Does all I need it to for controlling main pump (hi/lo speed), booster pump for cleaner, heater, control valve for solar panels, etc....Probably one of the cheapest price points for automation. To answer your question about differences, yes, the array of features is dizzying. If your handy, make a little spreadsheet with the features you want and compare them that way.

My only complaint with the SunTouch is that the box is a little small and its kind of a PITA to get all the wires in there.

No major differences.. Just make sure the Pump, SWCG, and automation can all "talk" with each other. The best way to do that is to only use one brand of equipment.

The heater is the only exception, as almost all of them can be controlled by any automation system...

I see you are in California, so my experiences may be similar to yours.

So, I just added Solar, and it took me abot 4 minutes t do the programming. I opened up the control box, saw the marking on the control board for the solar temp sensor, and hooked up the actuator to the aux plug [which was one of two plugs]. I went to SL Config, and told it to enable Solar for the system. Then I opened up Screen Logic; there were two new buttons next to the heater. So I chose "Solar Only," turned up the temperature, and then was disappointed. Nothing happened. But once the pump priming was complete, a minute later, the valve started turning, and I had solar heated water. I did this all from my iPhone.

So I like the ease of programming of Pentair [did not used to be this way!]. If you want cost efficiency, I would look at the link that compares SWG to liquid chlorine. In that thread, The large Hayward and the Large Pentair SWG give you the lowest cost per lb of FC.

I will also say that my neighbor has Hayward, and he is envious; I think this is because he has had more failures and was not happy with the technical support. So take that with a grain of salt [heh]. Also because he is the type that wants to figure out the problem, THEN fix it, rather than removing and replacing stuff till it works again.

I will also say Raypak for your heater. If I were to start all over today, I'd go with Raypak no matter what kind of automation I have. It just works really great. And since this is a pool/spa combo, I'd go with the 406 if you can. It will heat up your spa fast, and keep it at a stable temp. I had someone over that had a Pentair Heater, and they remarked how quiet the RayPak is.

I see your FNS is old. I had an Old FNS also, and replaced it with a Quad DE80. I could not be happier. Almost all the advantages of a cartridge filter [low power use, easy to clean], and almost all the advantages of a DE filter [ultra crystal clear water], with almost none of the downsides of either. I was able to get my pump down to 750 RPM without losing the flow switch on the SWG [but I run it at 1200]. Basically, with a Quad DE80, and a VS pump, your power use goes down to about 140 watts, instead of the dominant power use in your house. With your smaller pool, you probably would do just great with a Quad DE60. Many people are eliminating the valve from their QUAD DE setups since cleaning is pretty easy, and you only need to do that 1-2 times a year.
G

In CA, depending upon where you live you may have to buy a low NOX heater such as the Raypak 407A. Also, +1 on the Pentair Quad DE filters. Love mine, crystal clear water. As far as the automation goes, consider the Pentair Easy Touch 8.
You must log in or register to reply here.
Thread Status
Hello , There was no answer in this thread for more than 60 days.
It can take a long time to get an up-to-date response or contact with relevant users.

L
Help Me Replace My Pool and Spa Equipment

R
Need to replace old equipment...but with what?