Hi guys - I just have an honest question, is it really that important to follow the CYA chart recommendations in every circumstance?

I ask because I just got a new to me pool. When I tested the CYA, the level was around 250+ (after 25/75 dilution). I did almost a full drain and fill. Afterwards, I confirmed with two tests my CYA is still around 60-65 (I also stirred up lots of buildup and scrubbed while draining). Based on the chart, I should have minimum 5 FC with target of 8 FC. However, I believe from testing the water initially, and from the way the water was chlorinated previously, that it seems to only have been kept around 3-5 FC or so - with 250+ CYA.

So now that I did the drain and fill, and still have 60 CYA - from a practical standpoint, I understand that ideally CYA would be lower to maintain the pool at 3 FC - but since the pool was apparently running fine all this time at 3-5 FC and 250+ CYA, would it not likely be fine to continue at 3 FC with CYA at 65? I just can’t help but wonder if I am needlessly worrying about keeping my FC at the recommended level of 8, given how long that old water must have been in there. The water was clear and no reported problems from previous tenants when I did the drain and fill. The pool is in the sun most of the day here and doesn’t have leaves etc getting in it much if that matters - thanks for your input

You're in Texas. With that CYA level ( which is perfectly fine for us) don't let your minimum go below 4 or 5.
B

OK that makes sense to me - thanks for the reply 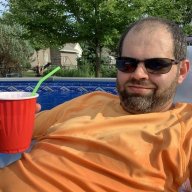 Keep in mind that falling below the minimums does not mean that you will have problems with algae. It means that conditions are right for algae to take hold.

At the prior CYA/FC levels, the active concentration of hypochlorous acid was quite low. That means it would take a lot longer for it to kill potential pathogens, increasing the likelihood of someone getting sick. It also means that an algae bloom could occur. The fact that it looked fine previously does not mean that it was clean of potential pathogens, it just means that an algae bloom never took hold. In other words - they got lucky.

Follow the chart and never fall below the minimum level and science has taught us that your water will be clean, safe, and can not get algae. No risk, no gamble, just crystal clear, sanitary water.
You must log in or register to reply here.

Testing and Balancing Your Water Jun 7, 2021
mbeezie
M
S
Where did my bleach go?