Hi all,
First time poster here. I want to buy a solar cover for our pool. It's about 45' by 15', with curves that make it uneven (see picture). We're in SoCal, and the pool temp unheated is 70 degrees. My husband thinks a cover won't help and will be a pain that will quickly be abandoned, but I think it will help us get an extra month of swimming in for the kids more cheaply. So. . would it be easier to try out two circular ones? There's no chance of putting a roll-up thingy at either end, because of the way the pool is built, so we have to fish them out and flop them aside each time we use the pool.
Thanks for any advice! (I'm attaching a picture, but the neighbor's tree shading the pool is now gone, so that's not an issue.)

Your husband is right, it’s going to get really old, real fast. Covers don’t heat pools, they simply retain heat overnight when evaporative heat loss is the highest. And large area blankets get very heavy when wet, often a job for two strong backs at least. Finally, the covers will likely not last more than two seasons before they get brittle and you find the blue bubbles popped and shards of blue plastic in the water. Each cover is going to run you about $150 and, once you cut it (if you do), the warranty is void (not that it’s a good warranty either).

Does your pool have a heater? Is solar heating possible with the roof area you have?
Reactions: catercorn
C

Thanks for your answer! Yes, we have a pool heater, and it works great, but the pool is so big (it was here when we bought the house) that it takes a long time and lots of money to heat. We have a good set up to add solar eventually but couldn't do that this year, for various reasons--that's something to look into for later. But now, for these "shoulder season" times, for this year, I'm wondering if even covering it at night would help keep the temp up? Because it's SoCal, we have huge temperature swings from day to night.
I hadn't thought that the covers would be heavy with water on them! What about putting three or four small ones from Amazon to hold the heat in?

If you can heat the pool, then a cover will keep the majority of that heat in the water.

If you want to heat it with your heater, you need a cover.
Reactions: catercorn 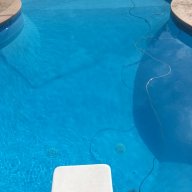 I just bought a solar cover for the first time for the purpose of maintaining our heat overnight when it's cooler and the pump/heat pump doesn't run...and for the days we don't use it.

With our heat pump, we can increase the temp about 8 degrees during the day, and then we lose almost 50% of our gains overnight. We have an unusual shaped pool as well. I bought a 45' x 25' cover and plan on trimming it down to size. I'm thinking it may be a little short on the side of one of our "circles", but I think that will have minimal impact. Mostly covered is better than not covered.

Based upon someone's advice, once it's cut to size, I will cut it into three pieces so that it can be more easily managed. I am excited to see the difference between our electric bills last year and this year to see if it was worth any addition effort! Good luck!
Reactions: catercorn
G

I have an odd size pool and I cut my cover in half. I use Solar Roller to roll up and keep the cover in the water. It also has instructions to tell you how to cut the cover for odd size pool. It works but not very durable for me. It starts to break after 2 years.
Reactions: catercorn

We share the same climate, and I will say you will see great benefits from a pool cover early and late in the swim season with our temperature swings. You probably won't use it much during the hottest parts of summer. My pool is a bit odd-sized, but nothing like yours. Covers are a bit of pain, but overall its worth the effort. I've had covers on two pools during my 11 years of pool ownership. My current cover is now on its fourth season and still holding up okay. I think this may be its last year, but I will replace it when the time comes. Make sure you store it out of the sun when its not on the pool.

What is the elevation difference between the two sides of the pool? A reel would be the easiest method of placement and removal of the cover, but you would need to put the reel on a platform on the short side to make up for the difference in elevation. I did this at my last pool, but there was only a difference of less than 10" or so.

For my current pool, I bought a cover large enough to cover the entire surface area. My pool is 16' wide at the narrowest point and about 33' in length. I cut the cover lengthwise at one of the seams into two main sections and one small section. I use my pole and brush to move the sections around so I can pull them onto the deck and roll them up. Its an easy job for one person and much easier with two. I do need to fold each section into itself to make it a bit more manageable. I've posted a couple pics below.

There have been only a few occasions where the Santa Ana winds have blown the covers around a bit. I don't believe your victimized much by the winds as you're nicely protected by the San Gabriel mountain range. 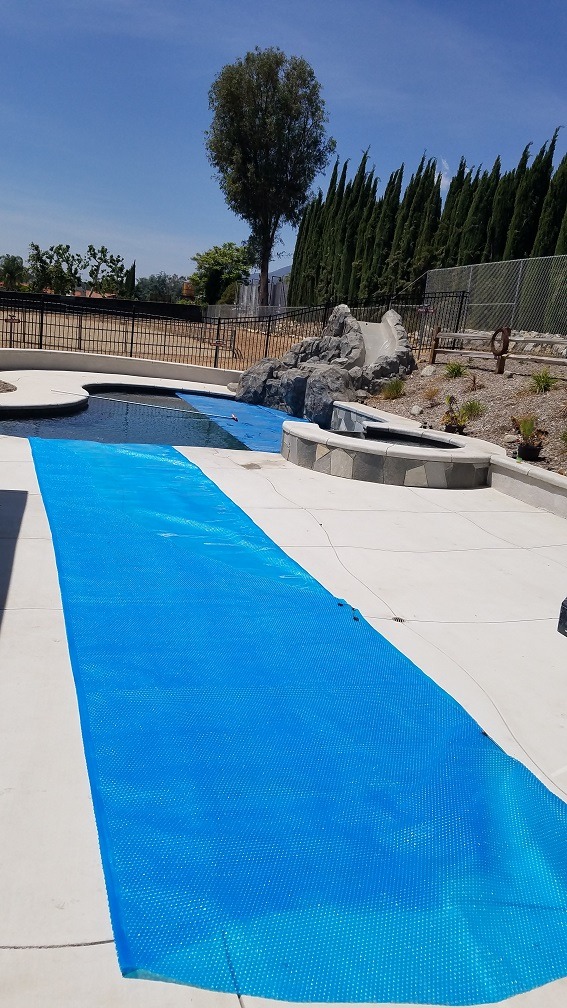 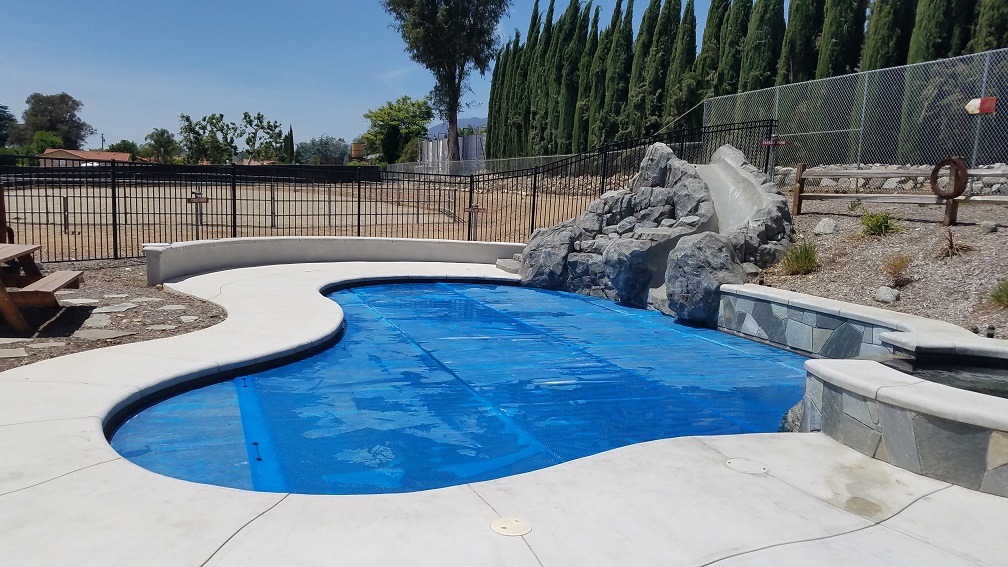 Thank you, all! The elevation on the back is way higher (maybe 30"? from the front), so no roller would work on any side (there's a lot going on around the pool with planters and the spa etc.) . I'm tempted to just get a couple of the cheaper smaller bubble ones from Amazon and slap them together for this month where the days are hot. It costs so much to heat the pool, that the investment in the covers seems small enough. I suppose if we don't cut to size, it will look bad?
C

Does anyone have a specific cover on Amazon they'd recommend? Does the thickness make that much difference?
Also, Rancho Cost-a-lotta, we sure got the Santa Anas last night! Collecting pool toys from everywhere.

Thinnest and cheapest is the way to go. The thicker ones don’t last any longer than the thinner ones but are a heck of a lot heavier and harder to fold.

catercorn said:
Does anyone have a specific cover on Amazon they'd recommend? Does the thickness make that much difference?
Also, Rancho Cost-a-lotta, we sure got the Santa Anas last night! Collecting pool toys from everywhere.
Click to expand...