I have a few questions about getting the pump run time and SWG settings correct. I'll get you up to speed first.

Pool has had water in it for 7 weeks. Salt was added last Friday. Hayward recommends 3200ppm, and the pool is sitting at 3200ppm - verified using Taylor k-1766 and pool store tests. Prior to adding the salt, I was using pucks - I WANTED to get the CYA up. I'm sitting at 60ppm CYA now, and I know I need to get to 70-80. The pool chemistry finally started to settle in the last 3 weeks and I was only adding about 4oz of MA every 3 or 4 days to keep me hovering at 7.6. After starting the SWG on Saturday, I've been adding ~12oz of MA daily - I think I'm running it too much and I'm here to seek guidance about best practices.

2) I initially had the SWG at 40% and starting 5 minutes after the pump started, and ending 5 minutes before - other than that it was following the same schedule as the pump. After the first two days of FC = 7.5ppm, I turned it down to 25% on the same schedule. The last two days, I'm still at FC 7.5ppm - I realize the FC from the previous days is still in there, but it can't be THAT much. My REAL issue is with the freaking pH. I've read on TFP that SWGs will raise pH, but I did NOT expect that kind of impact. This is where I need the most help. Does the SWG process raise the pH at the same rate, regardless of what percentage it's set at, is it a matter of total run time, or is it a combo of both? Am I better off running at a higher percentage for MUCH shorter periods, or running at the lower percentage for slightly shorter periods? Tonight I disabled the SWG for one of the 5 hour run times, I'll give it 2 days to gauge impact.

3) The PB only added 8 x 40lb bags of salt. According to a "good" water meter, there are 14,700 gallons in the pool. I tested the water early on (just a few days after water was added and not RIGHT before the salt was added) and the test kit read ~100ppm. I've only used a few bags of shock, maybe 12lbs of baking soda, and I'm not sure how much ice melt the PB added a few weeks ago - would those have raise the salt that much? According to PoolMath, 320lbs of salt would only get me to ~2600ppm with 14,700 gallons; but I'd hit 3200ppm if there were only 12,000 gallons in the pool. I will say that I'm using the amount of MA recommended by Pool Math for 14,700 to correct pH and it seems to be spot on.

Turnover is a myth. Run the pump for a purpose. First to generate your chlorine each day. Second to skim the surface. Try running the pump at the lowest rpm that will let the SWCG operate. If that also skims the surface, use that rpm.

And that is false. The generation of chlorine within a SWCG is pH neutral.
You are no longer using trichlor. That product is very acidic. So your acid use is about equal now, using more MA, as it was when you were using the trichlor.

If your salinity reading is good and the SWCG is happy, no need to stress over it.
Reactions: geonjay 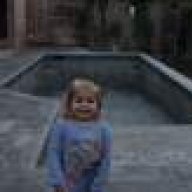 @geonjay First, I find out how long I want to run the pump. I run my pump 24/7 except during Smart Hours (savings program from our electric company). If a change is made, duration of pump or % of SWG, I make the change and test the next day. I generally will test the same time each day when I am making changes.
Reactions: geonjay
G

I'm still averaging 12oz a day of MA and averaging ~7.5ppm FC. Even with one of the 5 hour cycles disabled on the SWG, it's still HIGH FC. I'll shorten the current cycles down by 1.5 hours each.

geonjay said:
I'm still averaging 12oz a day of MA and averaging ~7.5ppm FC. Even with one of the 5 hour cycles disabled on the SWG, it's still HIGH FC. I'll shorten the current cycles down by 1.5 hours each.
Click to expand...

I still need to get my CYA up another 10ppm. Are you also running borates?

I am now, this year.. I have been running without borates for 7 years..
Reactions: geonjay
You must log in or register to reply here.
Thread Status
Hello , This is an inactive thread. Any new postings here are unlikely to be seen or responded to by other members. You will get much more visibility by Starting A New Thread

D
SWG not keeping up