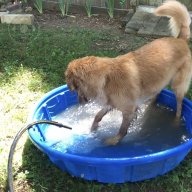 My pump has been great all summer and was just bought in April brand new. I’ve had a problem with it since Monday. We had a big wind storm the night before so I am not sure if that is related.

My pump basket is running half full. When I first start the system it primes fine, and will hold prime for the 5 or so minutes it’s running at high speed (primes at 2900 for 5 minutes), then the speed drops as scheduled to either 900 or 1200 and a bubble will start growing in the lid and eventually the basket is only half full of water. Turning the speed up, it will stay full as long as it’s running really high.

I tried clearing the impeller but nothing seemed to be in the way. What else can I look for?

So, it's not losing prime but it appears to be sucking air from somewhere? And this only happened after the storm? Is your skimmer clean? Are you getting normal pressure from the returns when you have the pump basket half full of water?

I did some more investigating today. I guess I have an air leak somewhere?

Starting the pump it goes into prime mode which runs at 2900 for 5 minutes. I can see a lot of small air bubbles inside, which didn't happen before (there were some, but not like this)

After 5 minutes, it drops to scheduled speed, which is either 900 or 1200. Immediately a large palm size bubble forms on the top, and after about 5 minutes, the water level inside will have dropped about 3/4th full.
If I turn the system off at this point, the basket will loose at least 1/2 of the water. Before, turning the pump off, the water level didn't drop at all.
Turning it back on, it will reprime just fine. There is no struggle for it.

While it is running, if I turn the speed up manually, to about 2100, the basket will refill to proper level and it will hold. I watched it for about 20 minutes after doing this, and the level in the basket didn't drop. When I turned it off, the water level did not drop either and there was only a nickle sized bubble. I found this really weird, it is almost like running it at 2100 fixes it. It's weird that even when I shut the system off, it remains "fixed"the water level won't drop like it does if I turn it off when it's at 900-1200.

There are bubbles coming out of the return jet in the shallow end of the pool, but not the deep end (I only have two jets). The return pressure seems normal from both jets.
The skimmer is clear, far as I can tell. I tried removing the weir door, it didn't help.
Also filled the pool a little higher then I usually have it (middle screws on skimmer), no difference.

I tried putting the filter on recirculate. There is a steady stream of water coming out of the waste pipe in this mode only. This didn't happen the last time I had it on recirculate, but that was probably 2 months ago.

I checked the pump basket lid o-ring; it seemed fine, no cracks or anything. I put some lube on it and cleaned everything up really well but it had no effect.
I stuck a metal hanger to fish around the impeller but there seemed to be no debris in there.

Because of the leak from the waste line, I am starting to suspect the multi-port valve, which I read is a common failure, but, I had not touched it for weeks before this happened so I guess it's a bit weird for it to suddenly fail?

Does the pump eventually go dry from the air bubble or just develop an air bubble in the basket at low speeds and keep pumping normal water flow?

It has not gone dry and I’ve kept it running. The water level in the basket is just always only a little over half full, unless I run it at 2100.

Strawberryshortcake said:
It has not gone dry and I’ve kept it running. The water level in the basket is just always only a little over half full, unless I run it at 2100.
Click to expand...

It is normal for some VS pumps to develop an air bubble in the basket at low RPMs. If it doesn't run dry I would not worry about it.

It is not a bubble. the basket is only half full. And i’ve had the pump nearly 6 months, so it’s not normal, because it’s not done this before. There are also bubbles coming out of a return jet, which is also new.

I felt the jets today and the pressure coming out is now really low.

Here are some gifs of the pump. Today it's much worse then when I first noticed it.

Today. Hard to see the water level with the condensation on the lid, but it's 1/2 or less.

Here is the water flow coming into the skimmer, which seems normal/as usual.

Wednesday at 7:00 PM
Suzette
S
P
Another - Pump will not stay primed

Wednesday at 7:46 PM
pmoncho
P
V
What is priming exactly? And can it be removed? Priming makes my pump draw air when skimming