Pump is noisy and shuts off after a minute 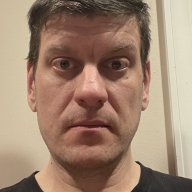 I'm Mike from Wexford, PA. I'm new to the site and new to pool ownership.

I hired a local company to open my pool and give me a bit of an orientation. That was a month ago. I have been running my Hayward Super Pump continuously on their recommendation. On Wednesday evening, I noticed a bit of a whine coming from the pump. Everything else seemed okay so I didn't think much of it.

When I woke up Thursday morning, the pump was so noisy that I could hear it from inside the house. By the time I came outside to investigate, it had shut itself off.

Fast forward to the weekend, I had time to investigate further. After a bit of googling and watching YouTube videos, I began to take things apart. The skimmer basket had a bit of junk in it, but certainly not enough to cause an obstruction. Using my fingers, I could reach inside and turn the impeller. It turns without too much trouble. Not sure how smoothly it should turn, but I did expect it to turn a bit more easily than it did.

Next, I detached the motor from the housing. I could not see any debris in or around the impeller. 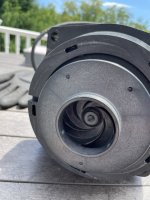 I had a brief look at the start capacitor, but it looked okay – no bulges or anything like that. I couldn't get a capacitance reading on it from my multimeter, but I've never measured a capacitor before, so I might be doing something wrong. That's as far as I went with the disassembly. After that I put everything back together.

Right now, I can get the pump running for about a minute. I see water flowing through the top of the clear plastic housing, and I get about a 15psi reading on my filter's pressure gage (which is normal), but the pump is still very loud and soon shuts off.

Here's a video of the pump running noisily and then shutting off:


I've called several technicians and because it's busy season, they're all at least two weeks out. That's a lot of lost swimming time in prime season

Is there anything else I should try?

no video....disable your power and pull the end cap off your motor for inspection . Some motors have a thermal shutdown if over heat occurs.

Yeah, it's definitely shutting off due to overheating. If I leave it for 10 or 15 minutes, then it will run again for another minute.
W

With your ear close...noise more from motor end or wet end.?Good video btw. TFP has some good pump experts so stay tuned.
S

Sorry you are having trouble with your pump. I can't help with that, so hopefully someone else can.

In the meantime, to keep your water from turning green, do you have a portable sump pump you could use to keep the water circulating? Also, would help to get some liquid chlorine in as well.

SecoSteve said:
Sorry you are having trouble with your pump. I can't help with that, so hopefully someone else can.

In the meantime, to keep your water from turning green, do you have a portable sump pump you could use to keep the water circulating? Also, would help to get some liquid chlorine in as well.
Click to expand...

I don't have a sump pump, but could probably get one. I will keep an eye on chlorine levels though. I do have some liquid chlorine and I put a chlorine floater in there.

Chances are the motor bearings are going bad.
Looking in the pump basket, it appears the basket isn't full of water. You may also have a suction side air leak - which isn't directly related to the noise from your video. But something to watch and fix.
Reactions: jeffchap
J

Check the supply voltage and see what voltage the motor is set for.

Don't change the selector unless you are 100% sure how to do it correctly.
1

Yeah, it's definitely shutting off due to overheating. If I leave it for 10 or 15 minutes, then it will run again for another minute.
Click to expand... 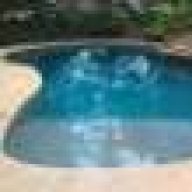 Bad bearings would definitely contribute to the overheating. If they are replaceable, I'd give that a shot before springing for an entirely new pump.

Thanks to everyone for the advice! I was lucky enough to be able to get a technician out here yesterday. I started up the pump for him and as soon as he heard the noise it was making he told me it was done for.

I'm not sure if the bearings were replaceable but since I have home warranty coverage for the pool equipment, I put in a claim and they paid for most of the cost of a new pump. Things are back up and running (quietly!) now with a Hayward Super Pump 700 Series.

With no pump running for almost a week, the water got cloudy really fast. Clearing that up will be my next challenge.
Reactions: JamesW and willygee
You must log in or register to reply here.
Thread Status
Hello , This is an inactive thread. Any new postings here are unlikely to be seen or responded to by other members. You will get much more visibility by Starting A New Thread

K
New pump turns on and then immediately shuts off

Pumps, Filters, and Plumbing Jun 5, 2022
knharris
K
B
Pump motor shuts itself off after running briefly