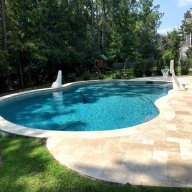 I have a friend with a new house who inherited a green pool with an AutoPilot Digital pump/SWG controller.

Unfortunately, his control unit screen went blank soon after he started using it and is now in need of either repair or replacment. I have found the 833N board for sale at $250-$400 online, but hate to put that much into an older unit.

Does anyone here have an old replaced unit for parts available for sale? The control board on this one seems to work (pump controls still active) but since you can't see the screen, its a bit difficult to control the SWG and pump schedules.

If no old parts are available, does anyone know if this unit (DIG-220) supports a remote control that would circumvent the issue? Any help would be greatly appreciated, as my equipment is all Hayward, and the PoolPilot stuff is new to me. Thanks!

Sorry you have not received any responses. Have to be honest, have never seen that type of system on the forum. So may not have many members that would have spare parts.
P

Auto pilots imo are garbage. They are undersized and have constant issues. He would be best to get a newer larger sized system.

Agreed, as his whole system is undersized, but he's a new home owner and a new pool owner and we're just trying to get it usable for the immediate future. Renovating the whole house is his first priority, I'm just trying to help him get the pool in decent shape so he can focus on other things.

We are in the middle of a SLAM and things are going well. My first step was convincing him to get a TF-100 and speedstir, which he did, and now he's also using the app for the SLAM. Step 2 was drain and refill since his CYA was 200+!!

We will get it there soon.

After SLAM is over, I just won't be able to modify his SWG settings on the PoolPilot, since the LED screen is dead. Until that is resolved, we will just test FC daily and adjust with liquid chlorine where needed. It's been fun putting all the information from TFP into action and getting him on-board. This site is still the best thing to happen to residential pools!
You must log in or register to reply here.
Share:
Facebook Reddit Pinterest Tumblr WhatsApp Email Link