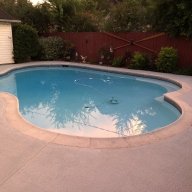 Growing up, there was a group of kids around my age that lived along the same road in South Baton Rouge. We spent the summers at one particular house because they had a pool. That house has since been through many owners and the pool fell into neglect. Last year, a friend of mine purchased it and began renovations, including the pool. She added water features so it was recommended that she tear out all of the old plumbing and just re-do everything (not a huge deal since she was putting in a new deck and plaster anyway). On demolition day, she sent me a text telling me that the entire pool was plumbed with copper pipe. Unexpected, but nice, surprise since she was able to sell the pipe and offset a little of the renovation cost.

And suddenly, the lone blonde girl of our group whose hair turned a lovely green EVERY SUMMER came to mind. I had to call her to let her know that it was, indeed, the pool- just not the chlorine like everyone told her.

Was copper plumbing a common thing, though? Never heard of that, but I haven't renovated any 1950/1960 pools lately.
Reactions: TLT

Oh yeah... it was a real thing to some. And if the pool chemistry was out of whack and caused that copper to get into the water your friend's hair was leprechaun green!

Would love to see pics of the rehab. Tell your friend to join here and share the process with us!

Reactions: borjis
You must log in or register to reply here.
Thread Status
Hello , There was no answer in this thread for more than 60 days.
It can take a long time to get an up-to-date response or contact with relevant users.

Do all these valves need to be 2 way?

Dolphin Nautilus CC Plus being discontinued