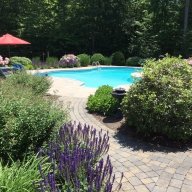 In the Suggested FC Levels section in the Pool Math Table toward the bottom, the following is shown:

SWG:3 Normal:5 to 9 Shock:24 Mustard Algae Shock:34
Suggested target FC levels based on the current CYA level for outdoor pools.
Note: Be careful if your CYA is really and truly zero!

My question is a clarifying one- Is this basically saying (in this example) that based on the numbers entered for all the other testing categories (PH, TA, CH, CYA, Salt etc...) that with a SWG, FC should be kept at 3 and normal range is considered 5 to 9 and to shock you would target 24?

The SWG level is a minimum, you never want FC to go below there. Most people aim a little higher so they will have some margin in case it goes lower than expected. The normal range is for people who don't have a SWG, and again the first number is a minimum that you never want to go below.
You must log in or register to reply here.
Share:
Facebook Reddit Pinterest Tumblr WhatsApp Email Link
Top Bottom