I am currently SLAMing away at some Black Algae for my pool at the house I bought a few months ago. I removed the pool light to see what was lurking in there and it was pretty gross. The light never worked so we assume the bulb is out. There are no markings on the bulb (I think I saw the word pool on it somewhere but it wiped off when I was cleaning it so...) I don't know what the inside is supposed to look like but its pretty gross. There didnt seem to be a lot of water within the metal fixture but some was trapped between the lens and the cover. There was lots of algae on the o-ring and inside the lens and some on the edges of the metal fixture along with some slime/baby puke but it didn't seem flooded.

Do I need to replace the entire metal fixture or should I just try buying a new bulb (which I have to figure out the size for) and see if it works? I am mostly concerned with the color of whatever that... ?insulation? is at the end of the metal fixture but I am really clueless here. Thanks so much for the help in advance!

I removed the bulb and wiped what I see now is like a rubber seal on the bottom. Some of it actually wiped off and showed its blue-green rubber insides so I am sure I will need a new fixture either way. I put it back in because I assume it shouldnt be just dangling outside the pool. Luckily there was no black algae growing behind the fixture (inside is another question but my FC is a bit too high to go jumping in) I measured the outside diameter of it and it was 7.5". Is that what I need to find new ones?

Look for a manufacturer, serial number, anything. InyoPools has lots of replacement parts but you need something to go on.

Not sure I followed your descriptions correctly, but I might have left that fixture out just so the "SLAM-water" would have easy access to the inside of the niche. Besides, that fixture out of the water has got to be safer than it in the water!

Is that water inside the fixture? Or you said just in the lens? You wrote "didnt seem to be a lot of water within the metal fixture." Did it seem like there was any? Am I'm seeing rust and corrosion? Just me... but I couldn't bring myself to fix that thing... Perfectly functioning pool lights are scary enough to me...
D

That sure looks like my old old Pentair. I replaced mine with an IntelliBrite 5G. It fit the same niche. Pretty easy swap, just measure the cord length and get one at least that long.

Yeah I didnt know if I should be letting lots of water inside that hole or not was the only reason I put it back on but luckily I have a very long screwdriver so I can remove it without jumping in. Getting it on was harder anyway! Happy to leave the light out of the pool as long as that doesn't damage the pool itself. I am thinking of replacing the fixture either way since it looks pretty corroded and I rather get a new model with tabs instead of screws anyway.

and yeah I can pour over everything more closely but it really seemed devoid of all markings that would tell me. Now that my AC just got fixed and I am thinking more clearly there was definitely water in there. Not like theres anything between the lens and the fixture but yeah it looks pretty beat up all around.
D

Mine looked very similair to yours. I tried to repair. I should have just cut my losses and replaced at first failure. I even cooked mine out in the oven before i attempted to waterfroof it. When the water starts its way in it does not not take long to go.

I can't speak to your niche, but mine is full of water all the time. The conduit connecting it to the junction box is also full of water. So exposing my niche to pool would have zero ill effects. It's designed to be wet. Only my light fixture, cable and how the two connect are water proof.

I don't like to advise about pool electrical, but I think it's fair and safe to suggest: if your light fixture is wet inside, or showing signs of having been wet, then you shouldn't put it back in the water. If it's on a dedicated breaker and/or GFI circuit, turn them all off. Don't remove it completely though, because installing a new one relies on the old light's cable to pull the new light's cable through the conduit.
Last edited: Sep 16, 2020
Reactions: guinness

Ok I can leave it out by the pool. Definitely don't have any qualms with replacing it. The old owners of this place clearly did though! I can leave it out of the pool as well. Lived here for 2 weeks now and have owned the place for almost 2 months without actually using the pool so I will do whatever to get it in working shape appearances be Darn. :]

Yes, welcome to pool ownership. I'm envious though. I put quite a lot into my pool when I first took it over from the previous owners (equipment upgrades, new finish, coping issues, etc). But it was a couple years worth of mistakes before I found TFP. Should'a, would'a, could'a. You found us early in the process, so ask away and you'll be able to avoid all the pitfalls. Congrat's on the new house and pool!
G

Yeah, definitely looks like an American Products / Pentair Pool Light. Get a R40 Bulb, 500-watt, 120-volt and a new gasket. Light should not be tested unless submerged.

If you want to replace fixture you need to measure distance between niche and junction box and ensure you have several feet spare to allow light to sit on the deck. 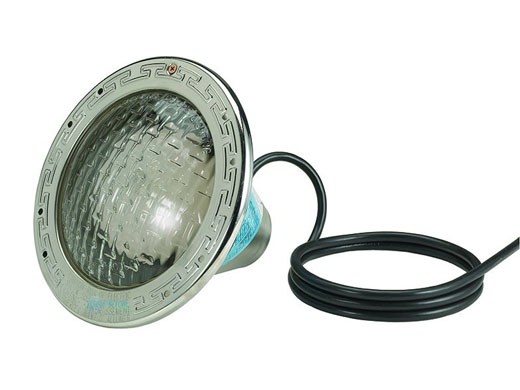 Ditto that about throwing the breaker or better just unwire it until you replace it. The niche is supposed to be wet as the unit is supposed to be waterproof. The big wire spring looking thing is there is designed to go to ground and trip you breaker when in the presence of water. Pretty good deal since i dont like to get shocked as i assume you don't either.
C

As guinness mentioned, your light fixture is made by American Products. The link from his post is the exact fitment.
I replaced mine not long ago but refused to run 120 vac for safety reasons. I bought a 100 watts, 12V stepdown transformer and replaced the bulb with a 12 volts color-changing LED.
Now, I don't have to worry about water leaking inside the fixture and get a zap. Now, that is some peace of mind!
Reactions: Dirk
G

It's a little misleading to say GFCI protected 120v pool lights are unsafe to use.

I am trying to decide between a Pentair Intellibrites 12v pool light with transformer vs. the 120v pool light. Code for my area requires 12v only for commercial pools. Are 12v lights safer?

There are other considerations:

Exposure to 120V in water is considerably more dangerous than 12V. That's a given. But...

Theoretically, a GFI in the mix renders the 120V light safer. But... that's if the GFI is working correctly! When was the last time any of us pushed the little test button on all our GFIs? Kitchen? Bath? Pool? Don't forget inside the breaker panel. Uh, huh.

You might think that a GFI on a 12V system would be the ultimate. But the "signal" that triggers a GFI to trip doesn't make it through the coils of a transformer! I don't know if the manufacturers of 12V pool lights have found a work-around for that fact, but it's something you need to know if you're relying on it.

That same transformer isolates the 12V side of the system from the 120V side. So it seems like that, too, would make it safer. But that is also assuming nothing befalls the transformer or its wiring.

Obviously, pool lights are generally safe. There must be 100s of thousands of them in the wild. (Millions?). So the odds are in your favor.

But it's telling that Mike Holt, generally considered to be a go-to expert in the field of pool electrical wiring and how to make it safe, won't put a pool light in his own pool!

Wow thanks so much for all the discussion. I ended up stripping my screw when I put it back in earlier so I was in high FC water for what felt like an hour to get it out. Thank goodness for TFP archives about stripped pool light screws! Looks like replacing it will also have some research involved but its something I would definitely do just because replacing any parts for this old light may be futile and I rather have something more leak proof and modern.
Reactions: Dirk

The wattage just affects the brightness of incandescent bulbs right? As in if I were to buy the 300 watt fixture it wouldnt be as bright as the 500 watt, but I can still replace it with a 500 watt equivalent LED bulb without issue?
C

The E26/E27 base Pentair Amerilite fixture is shipped pre-assembled with a R40 incandescent bulb in it. You can replace the bulb to a LED of your choice as long as the supply voltage and base match.
Youtube has a handful of videos showing how to do just that. In fact, a 40W LED bulb might turn your pool into a helipad....just kidding
Edit: Btw, the most challenging part is the cable pulling. So plan ahead.

How to replace your Pool Light to LED- DIY Upgrade to Save Money
Last edited: Saturday at 2:38 PM

Oh ok so I can save money if I plan to do an LED upgrade kit by buying the 300 watt fixture as opposed to the 500 watt fixture?
C

That is correct! Make sure to buy the 300 watts fixture with longer cable than what you need. The 500 watt model comes with a 500W incandescent bulb and a much thicker gauge cable.
Search youtube videos on how to replace a pool light fixture or engage an electrician.
Reactions: pirateyoshi
You must log in or register to reply here.
Share:
Facebook Reddit Pinterest Tumblr WhatsApp Email Link