I saw this on a different website and never halve seen this in the TFP but can’t remember everything.
is this statement true?
The pH in a pool or spa impacts the sanitizer efficacy of chlorine tremendously. For example, at a pH of 7.2, chlorine is 65 percent effective; at 7.8, 32 percent effective; and at 8.0, 20 percent. As you can see, chlorine effectiveness decreases dramatically as the pH in water increases. 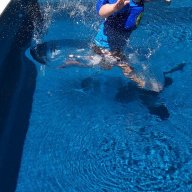 Found this in TFP a while ago but I only have a screen shot. 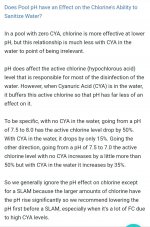 And here is The Deep End explanation:

OK everyone. Here are some graphs I put together so now you can give me feedback as to whether this is what you are looking for. First, I show the traditional HOCl/OCl- relationship on the left including a total line (for HOCl + OCl-) that is always at 100%. It should be noted that the chart on the left is valid for any Total Free Chlorine (FC) level.

The chart on the right shows the same situation when there is 30 ppm CYA and in this case the Total Free Chlorine (FC) level matters and is 3 ppm for this chart though when CYA >> FC it is roughly the ratio of CYA to FC that determines HOCl and OCl- levels. Also note that the percentage of disinfecting chlorine (HOCl) at a pH of 7.5 fell from about 50% on the chart on the left to around 1.5% on the chart on the right. Note that the total HOCl+OCl- level is not 100% when CYA is present. The difference from 100% (the Cl-CYA curve) is the amount of chlorine "bound" to CYA and though it is better protected from degradation from sunlight, it is also not immediately available for disinfection or oxidation (but is available "in reserve" as HOCl gets used up). Finally, notice how much "flatter" the HOCl curve is in the graph on the right indicating that the presence of CYA has made the amount of HOCl less sensitive to changes in pH (though we really need to look at a log scale for relative changes -- more on that next).

If we want to see changes in disinfecting chlorine (HOCl) in percentage terms, then a logarithmic scale is more appropriate so that equal distances on the chart represent the same relative amount of change. That is, it answers the question of how much improvement there is in the relative amount of chlorine when you lower pH. It is not quite as obvious in this graph, but the HOCl curve is a bit flatter on the right with CYA present, though at lower pH at around 7.0 the pH sensitivity of HOCl is about the same at 30 ppm CYA as it is with no CYA (and below 7.0 the pH sensitivity of HOCl is actually greater with 30 ppm CYA than with no CYA, but this is mostly due to the fact that with no CYA and at low pH most of the chlorine is already HOCl so there's no room for relative "growth"). Also note that at higher pH above 7.5 that the presence of CYA allows one to operate at higher pH without losing that much chlorine effectiveness (without CYA the effectiveness of chlorine drops rapidly above pH 7.5). The graph on the left cannot show the 0% flat line for Cl-CYA since it is off the chart (the 0% is at negative infinity since this is a logarithmic scale).

P.S.
It is interesting to note that the traditional HOCl/OCl- graph with no CYA showed the large variation in HOCl percentage vs. pH, but that this was rather pointless (for pools; not for drinking water disinfection) because the absolute concentration of HOCl was typically so large that it didn't really matter if only 10% of the total was HOCl. The minimum HOCl concentration for preventing algae is on the order of 0.05 ppm (disinfection minimum is around 0.01 ppm) whereas even a pool with no CYA and a pH of 8.4 (which is only 10% HOCl) with even a low total FC of 1 ppm still gives 0.10 ppm HOCl which is double where we normally run our pools today when we use CYA!

Reactions: mknauss
You must log in or register to reply here.
Thread Status
Hello , There was no answer in this thread for more than 60 days.
It can take a long time to get an up-to-date response or contact with relevant users.

Is 8.0 pH acceptable to stay at long term?

Wonky pH probe or is pH actually this high?

Testing and Balancing Your Water May 20, 2021
Newdude
N
K
Alkalinity won't go down...

Testing and Balancing Your Water May 22, 2021
mknauss